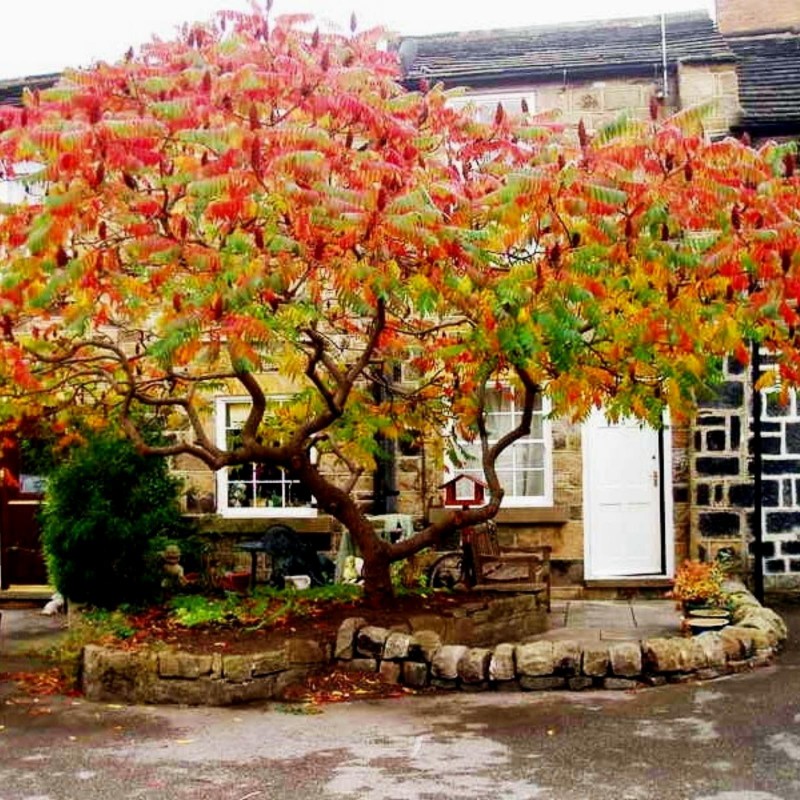 Rhus typhina, the staghorn sumac, is a species of flowering plant in the family Anacardiaceae, native to eastern North America. It is primarily found in southeastern Canada, the northeastern and midwestern United States and the Appalachian Mountains, but is widely cultivated as an ornamental throughout the temperate world.

Rhus typhina is a dioecious, deciduous shrub or small tree growing up to 5 m (16 ft) tall by 6 m (20 ft) broad. It has alternate, pinnately compound leaves 25–55 cm (10–22 in) long, each with 9–31 serrate leaflets 6–11 cm (2 1⁄4–4 1⁄4 in) long.[4] Leaf petioles and stems are densely covered in rust-colored hairs. The velvety texture and the forking pattern of the branches, reminiscent of antlers, have led to the common name "stag's horn sumac".[5] Staghorn sumac grows as female or male clones.[6]

Small, greenish-white through yellowish flowers occur in dense terminal panicles, and small, green through reddish drupes occur in dense infructescences. [4] Flowers occur from May through July and fruit ripens from June through September in this species’ native range.[7] Infructescences are 10–20 cm (4–8 in) long and 4–6 cm (1 1⁄2–2 1⁄4 in) broad at their bases. Fall foliage is brilliant shades of red, orange and yellow.[5] Fruit can remain on plants from late summer through spring.

Staghorn sumac spreads by seeds and rhizomes and forms clones often with the older shoots in the center and younger shoots around central older ones.[4] Large clones can grow from octets[clarification needed] in several years.

Within Anacardiaceae, staghorn sumac is not closely related to poison sumac (Toxicodendron vernix), although they share the name "sumac."

In late summer some shoots have galls on leaf undersides, caused by the sumac leaf gall aphid, Melaphis rhois. The galls are not markedly harmful to the tree.

Staghorn sumac is an ornamental plant which provides interest throughout the year; though its vigorous, suckering habit makes it unsuitable for smaller gardens. It can grow under a wide array of conditions, but is most often found in dry and poor soil on which other plants cannot survive.[4] Some landscapers remove all but the top branches to create a "crown" effect in order to resemble a small palm tree. Numerous cultivars have been developed for garden use, of which 'Dissecta' syn. 'Laciniata' (cutleaf staghorn sumac) has gained the Royal Horticultural Society’s Award of Garden Merit.[8][9]

In both French and German, the common name of the species (sumac vinaigrier, Essigbaum) means "vinegar tree".

Some beekeepers use dried sumac bobs as a source of fuel for their smokers.

The fruit of sumacs can be collected, soaked and washed in cold water, strained, sweetened and made into a pink "lemonade" sometimes called "Indian lemonade".[10] The leaves and berries of staghorn sumac have been mixed with tobacco and other herbs and smoked by Native American tribes.[11] This practice continues to a small degree to this day.

All parts of the staghorn sumac, except the roots, can be used as both a natural dye and as a mordant. The plant is rich in tannins and can be added to other dye baths to improve light fastness. The leaves may be harvested in the summer and the bark all year round.