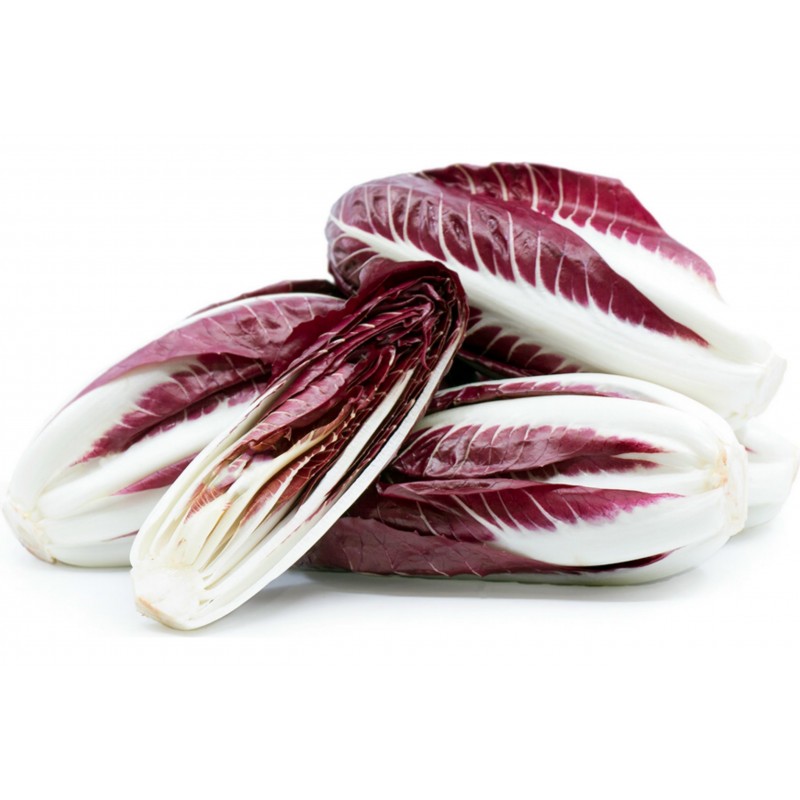 Treviso is a mild variety of radicchio that ranges in size from a small Belgian endive to a large head of Romaine lettuce. Its elongated leaves are deep purple to red with

Treviso is a mild variety of radicchio that ranges in size from a small Belgian endive to a large head of Romaine lettuce. Its elongated leaves are deep purple to red with white ribs and overlap one another tightly to form a compact bunch that is similar in shape to Belgian endive. Treviso's crisp, sturdy leaves offer an earthy, bitter edge much milder in flavor than the more mature Treviso Tardivo. Cooking will also further mellow the bitter flavor of Treviso.

Treviso is available in the fall and throughout the early spring months.

Treviso, botanically a member of Cichorium intybus, is a subspecies of chicory. Also known as radicchio Rosso de Treviso it is a member of the Composite or Asteraceae family. There are two types of radicchio from the Treviso region, a late harvest known as Tardivo and early harvest known as Precoce. Both varieties are protected by the IGP (indicazione geografica protetta) or Protected Geographical Indication certification. The high quality and characteristics of IGP products can be traced back to a specific geographical region.

The bitter flavor of radicchios such as Treviso is a result of its intybin content, a compound which has been shown to aid in digestion, appetite stimulation and as a purifying agent for the liver and blood.

Treviso, like other bitter chicory greens, can be served fresh or cooked. It can be sautéed, grilled, blanched or slow coked into soups, sauces and risottos. Its leaves are sturdy enough to hold up to heat and can be used as an edible serving cup or as part of a bed for grilled vegetables and meats. Its flavor pairs well with cream based sauces and dressings, parmesan cheese, lemon, orange, olive oil, sausage, prosciutto and anchovies. Treviso will keep, refrigerated, for one to two weeks.

Radicchio Rosso de Treviso has its very own consortium of 140 members known as Consorzio Radicchio di Treviso in Italy whose goal is to educate the public about Treviso as well as protect and uphold its quality and market it.

Like other varieties of chicory such as Chioggia, Verona and Castelfranco radicchio Treviso is native to the northern Italian region of Veneto, specifically it is from the town it owes its namesake to, Treviso. A registered IGP product, all true radicchio Rosso de Treviso marketed under that name must be grown within the region of Veneto in Treviso, Venice or Padua. Unlike radicchio Treviso di Tardivo which undergoes a second forced growth and lengthy manufacturing process Treviso Precoce is harvested young, cleaned and sent directly to the market. Authentic Treviso can be found in Italy as well as in Europe and in the United States at specialty markets.