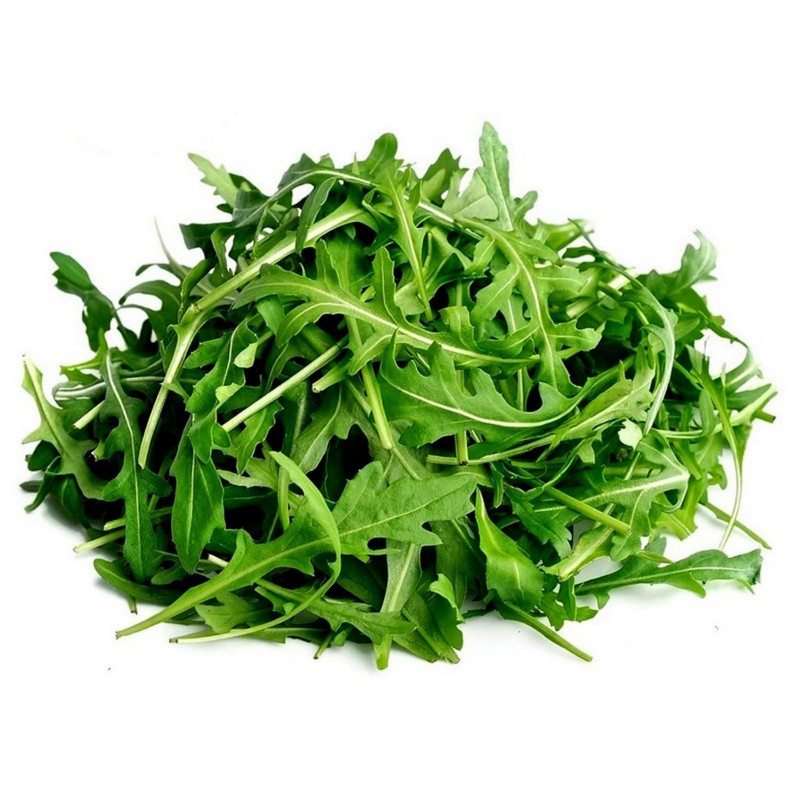 Eruca sativa (syn. E. vesicaria subsp. sativa (Miller) Thell., Brassica eruca L.) is an edible annual plant, commonly known as salad rocket,[1] roquette, rucola, rugula, colewort, and, in the United States, arugula. It is sometimes conflated with Diplotaxis tenuifolia, the perennial wall rocket, another plant of the Brassicaceae family, which in the past was used in the same manner. Eruca sativa, which is widely popular as a salad vegetable, is a species of Eruca native to the Mediterranean region, from Morocco and Portugal in the west to Syria, Lebanon and Turkey in the east.[2][3] The Latin adjective sativa in the plant's binomial is derived from satum, the supine of the verb sero,[4] meaning "to sow", indicating that the seeds of the plant were sown in gardens. Eruca sativa differs from E. vesicaria in having early deciduous sepals.[5] Some botanists consider it a subspecies of Eruca vesicaria: E. vesicaria subsp. sativa.[5] Still others do not differentiate between the two.[6]

Other common names include garden rocket,[5] or more simply rocket (British, Australian, Canadian, South African and New Zealand English),[3] and eruca.[3] The English common name, rocket, derives from the French roquette, a diminutive of the Latin word eruca, which designated an unspecified plant in the Brassicaceae family (probably a type of cabbage).[7] Arugula, the common name now widespread in the United States, entered American English from non-standard (dialect) Italian. (The standard Italian word is rucola, a diminutive of the Latin "eruca"). The Oxford English Dictionary dates the first appearance of "arugula" in American English to a 1960 New York Times article by food editor and prolific cookbook writer, Craig Claiborne,

Eruca sativa grows 20–100 centimetres (8–39 in) in height. The leaves are deeply pinnately lobed with four to ten small lateral lobes and a large terminal lobe. The flowers are 2–4 cm (0.8–1.6 in) in diameter, arranged in a corymb in typical Brassicaceae fashion; with creamy white petals veined with purple, and with yellow stamens; the sepals are shed soon after the flower opens. The fruit is a siliqua (pod) 12–35 millimetres (0.5–1.4 in) long with an apical beak, and containing several seeds (which are edible). The species has a chromosome number of 2n = 22.

Eruca sativa typically grows on dry, disturbed ground and is also used as a food by the larvae of some moth species, including the Garden Carpet moth. Eruca sativa roots are also susceptible to nematode infestation.

A pungent, leafy green vegetable resembling a longer-leaved and open lettuce, rocket is rich in vitamin C and potassium.[11] In addition to the leaves, the flowers, young seed pods and mature seeds are all edible.

Grown as an edible herb in the Mediterranean area since Roman times, it was mentioned by various classical authors as an aphrodisiac,[12][13] most famously in a poem long ascribed to Virgil, Moretum, which contains the line: "et veneris revocans eruca morantuem" ("the rocket excites the sexual desire of drowsy people").[14] Some writers assert that for this reason during the Middle Ages it was forbidden to grow rocket in monasteries.[15] It was listed, however, in a decree by Charlemagne of 802 as one of the pot herbs suitable for growing in gardens.[16] Gillian Reilly, author of the Oxford Companion to Italian Food, states that because of its reputation as a sexual stimulant, it was "prudently mixed with lettuce, which was the opposite" (i.e., calming or even soporific). Reilly continues that "nowadays rocket is enjoyed innocently in mixed salads, to which it adds a pleasing pungency".

Rocket was traditionally collected in the wild or grown in home gardens along with such herbs as parsley and basil. It is now grown commercially from the Veneto to Iowa to Brazil, and is available for purchase in supermarkets and farmers' markets throughout the world. It is also naturalised as a wild plant away from its native range in temperate regions around the world, including northern Europe and North America.[3][1] In India, the mature seeds are known as Gargeer.

Growing rocket in mild frost conditions stymies the growth of the plant, as well as turning the green leaves red.

Rocket has a pungent, peppery flavor that is exceptionally strong for a leafy green. It is frequently used in salads, often mixed with other greens in a mesclun. It is also used raw with pasta or meats in northern Italy and in western Slovenia (especially in the Slovenian Istria). In Italy, raw rocket is often added to pizzas just before the baking period ends or immediately afterwards, so that it will not wilt in the heat. It is also used cooked in Puglia, in Southern Italy, to make the pasta dish cavatiéddi, "in which large amounts of coarsely chopped rocket are added to pasta seasoned with a homemade reduced tomato sauce and pecorino",[20] as well as in "many unpretentious recipes in which it is added, chopped, to sauces and cooked dishes" or in a sauce (made by frying it in olive oil and garlic) used a condiment for cold meats and fish.[20] In the Slovenian Littoral, it is often combined with boiled potatoes,[21] used in a soup,[22] or served with the cheese burek, especially in the town of Koper.

A sweet, peppery digestive alcohol called rucolino is made from rocket on the island of Ischia in the Gulf of Naples. This liqueur is a local specialty enjoyed in small quantities following a meal in the same way as a limoncello or grappa.

In Brazil, where its use is widespread, rocket is eaten raw in salads. A popular combination is rocket mixed with mozzarella cheese (normally made out of buffalo milk) and sun-dried tomatoes.

In Egypt the plant is commonly eaten raw as a side dish with many meals, with ful medames for breakfast, and regularly accompanies local seafood dishes.

In West Asia and Northern India, Eruca seeds are pressed to make taramira oil, used in pickling and (after aging to remove acridity) as a salad or cooking oil.[23] The seed cake is also used as animal feed.