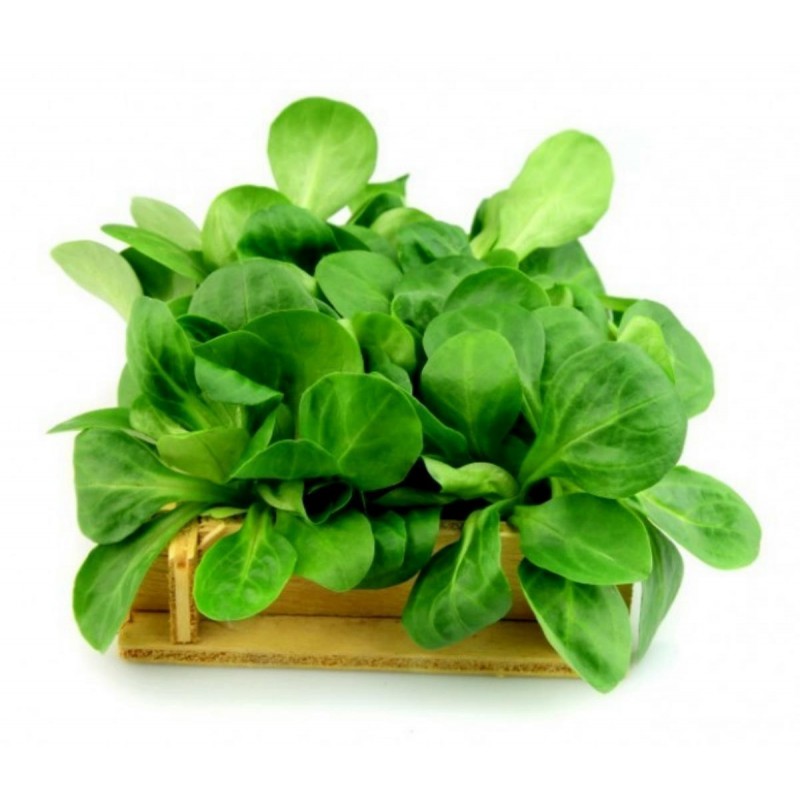 These miniature salad greens have been popular in central and northern Europe for centuries, and was first popularized by Henry XIV during the 1590's. The dark green leaves are delightfully

These miniature salad greens have been popular in central and northern Europe for centuries, and was first popularized by Henry XIV during the 1590's. The dark green leaves are delightfully minty-sweet and productive. Best if grown during cool weather. Very cold hardy. 45 Days
Corn Salad is a wonderfully tasty salad crop for early spring and late fall.Harvest the small heads of oval, dark green leaves when 4" across.
Wikipedia:
Valerianella locusta is a small dicot annual plant of the family Valerianaceae. It is an edible salad green with a characteristic nutty flavor, dark green color, and soft texture. Common names include corn salad (or cornsalad), lamb's lettuce, mâche, fetticus, feldsalat, nut lettuce, field salad and rapunzel. In restaurants that feature French cooking, this salad green may be called doucette or raiponce, as an alternative to mâche, by which it is best known.
Description
Corn salad, also known as mâche or lamb's lettuce, grows in a low rosette with spatulate leaves up to 15.2 cm long. It is a hardy plant that grows to zone 5, and in mild climates it is grown as a winter green. In warm conditions it tends to bolt to seed.
Corn salad grows wild in parts of Europe, northern Africa and western Asia. In Europe and Asia it is a common weed in cultivated land and waste spaces. In North America it has escaped cultivation and become naturalized on both the eastern and western seaboards.
As a cultivated crop, it is a specialty of the region around Nantes, France, which is the primary source for mâche in Europe.
History
Corn salad was originally foraged by European peasants until Jean-Baptiste de La Quintinie, royal gardener of King Louis XIV, introduced it to the world. It has been eaten in Britain for centuries and appears in John Gerard's Herbal of 1597. It was grown commercially in London from the late 18th or early 19th century and appeared on markets as a winter vegetable, however, it only became commercially available there in the 1980s. American president Thomas Jefferson cultivated mâche at his home, Monticello, in Virginia in the early 1800's.
The common name corn salad refers to the fact that it often grows as a weed in wheat fields. (The European term for staple grain is "corn".) The Brothers Grimm's tale Rapunzel may have taken its name from this plant.
Nutrition
Like other formerly foraged greens, corn salad has many nutrients, including three times as much vitamin C as lettuce, beta-carotene, B6, B9, vitamin E, and omega-3 fatty acids. It is best if gathered before flowers appear.
PL 8 (8g)
9987 од.