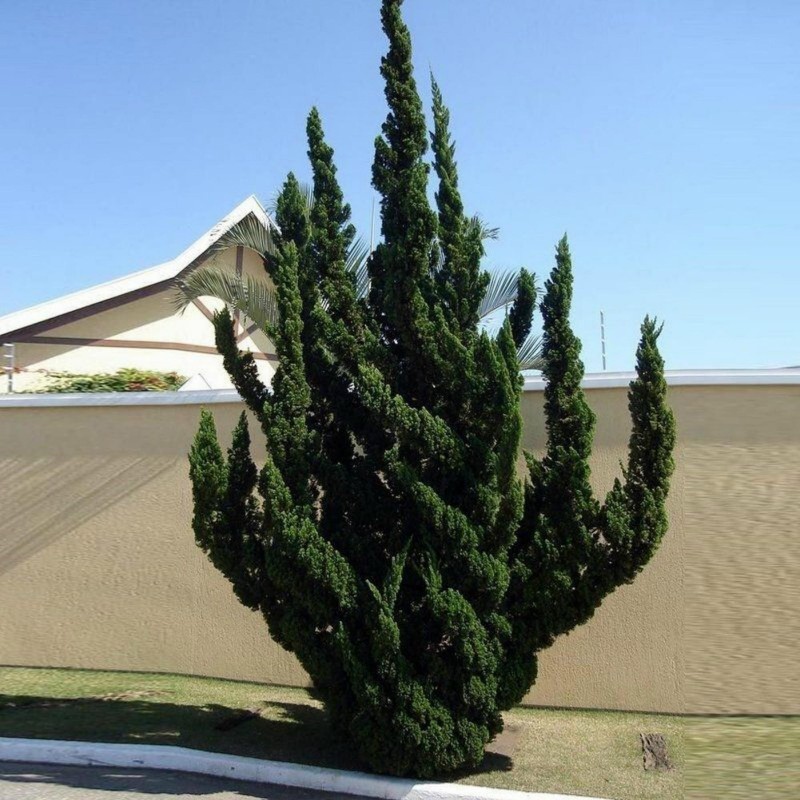 Junipers are coniferous plants in the genus Juniperus ( /dʒuːˈnɪpərəs/)[1] of the cypress family Cupressaceae. Depending on taxonomic viewpoint, there are between 50-67 species of juniper, widely distributed throughout the northern hemisphere, from the Arctic, south to tropical Africa in the Old World, and to the mountains of Central America.
Junipers vary in size and shape from tall trees, 20–40 m tall, to columnar or low spreading shrubs with long trailing branches. They are evergreen with needle-like and/or scale-like leaves. They can be either monoecious or dioecious. The female seed cones are very distinctive, with fleshy, fruit-like coalescing scales which fuse together to form a "berry"-like structure, 4–27 mm long, with 1-12 unwinged, hard-shelled seeds. In some species these "berries" are red-brown or orange but in most they are blue; they are often aromatic and can be used as a spice. The seed maturation time varies between species from 6–18 months after pollination. The male cones are similar to those of other Cupressaceae, with 6-20 scales; most shed their pollen in early spring, but some species pollinate in the autumn.
Detail of Juniperus chinensis shoots, with juvenile (needle-like) leaves (left), and adult scale leaves and immature male cones (right)
Many junipers (e.g. J. chinensis, J. virginiana) have two types of leaves: seedlings and some twigs of older trees have needle-like leaves 5–25 mm long; and the leaves on mature plants are (mostly) tiny (2–4 mm long), overlapping and scale-like. When juvenile foliage occurs on mature plants, it is most often found on shaded shoots, with adult foliage in full sunlight. Leaves on fast-growing 'whip' shoots are often intermediate between juvenile and adult.
In some species (e. g. J. communis, J. squamata), all the foliage is of the juvenile needle-like type, with no scale leaves. In some of these (e.g. J. communis), the needles are jointed at the base, in others (e.g. J. squamata), the needles merge smoothly with the stem, not jointed.
The needle-leaves of junipers are hard and sharp, making the juvenile foliage very prickly to handle. This can be a valuable identification feature in seedlings, as the otherwise very similar juvenile foliage of cypresses (Cupressus, Chamaecyparis) and other related genera is soft and not prickly.
Juniper is the exclusive food plant of the larvae of some Lepidoptera species including Bucculatrix inusitata and Juniper Carpet, and is also eaten by the larvae of other Lepidoptera species such as Chionodes electella, Chionodes viduella, Juniper Pug and Pine Beauty; those of the tortrix moth C. duplicana feed on the bark around injuries or canker.
[edit]Classification
Ashe Juniper (popularly called Cedar) in 'Mist lifting off cedars' by DJ Schulte
The number of juniper species is in dispute, with two recent studies giving very different totals, Farjon (2001) accepting 52 species, and Adams (2004) accepting 67 species. The junipers are divided into several sections, though (particularly among the scale-leaved species) which species belong to which sections is still far from clear, with research still on-going. The section Juniperus is an obvious monophyletic group though.
T 11
16 ks