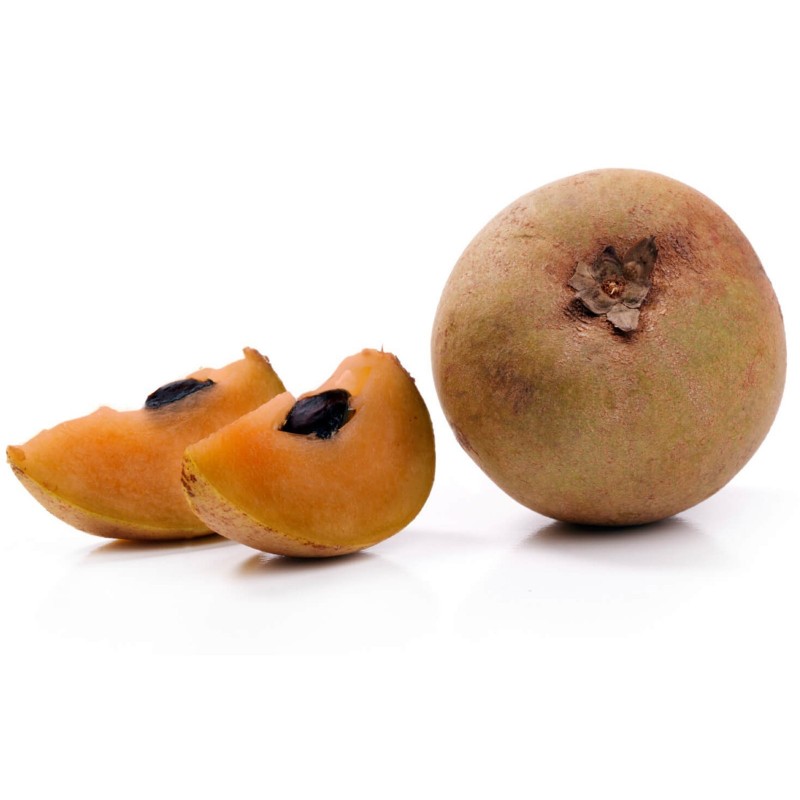 Manilkara zapota, commonly known as the sapodilla, is a long-lived, evergreen tree native to southern Mexico, Central America and the Caribbean. An example natural occurrence is in coastal Yucatan in the Petenes mangroves ecoregion, where it is a subdominant plant species. It was introduced to the Philippines during Spanish colonization. It is grown in huge quantities in India, Pakistan and Mexico.
Description
Sapodilla fruits being sold on a street at Guntur, India.
Sapodilla can grow to more than 30 m (98 ft) tall with an average trunk diameter of 1.5 m (4.9 ft). The average height of cultivated specimens, however, is usually between 9 and 15 m (30 and 49 ft) with a trunk diameter not exceeding 50 cm (20 in). It is wind-resistant and the bark is rich in a white, gummy latex called chicle. The ornamental leaves are medium green and glossy. They are alternate, elliptic to ovate, 7–15 cm long, with an entire margin. The white flowers are inconspicuous and bell-like, with a six-lobed corolla.
The fruit is a large ellipsoid berry, 4–8 cm in diameter, very much resembling a smooth-skinned potato and containing two to five seeds. Inside, its flesh ranges from a pale yellow to an earthy brown color with a grainy texture akin to that of a well-ripened pear. The seeds are black and resemble beans, with a hook at one end that can catch in the throat if swallowed. The fruit has a high latex content and does not ripen until picked, whereupon the fruit softens to a firmness and appearance very similar to that of a fuzzy, brown-skinned kiwifruit.
Fruit, cross-section
The fruit has an exceptionally sweet, malty flavor. Many believe the flavor bears a striking resemblance to caramel or a pear candied with brown sugar. The unripe fruit is hard to the touch and contains high amounts of saponin, which has astringent properties similar to tannin, drying out the mouth.
The trees can only survive in warm, typically tropical environments, dying easily if the temperature drops below freezing. From germination, the sapodilla tree will usually take anywhere from five to eight years to bear fruit. The sapodilla trees yield fruit twice a year, though flowering may continue year round.
Other names
Sapodilla is known as sapodilla in Guyana, Grenada, and Trinidad & Tobago, zapote in Colombia, Honduras, El Salvador, Cuba, and the Dominican Republic, níspero in Costa Rica, Cuba, Puerto Rico, Nicaragua, and Venezuela, dilly in the Bahamas, naseberry in Jamaica and other parts of the Caribbean, sapoti in Brazil and Haiti, chico or tsiko in the Philippines and chicosapote or chicozapote in Mexico, Hawaii, southern California and southern Florida.
It is known as chikoo ("चिक्कू" or chiku, "चीकू,") in India and Pakistan ("چیکو" chiku or "آلوچَہ" âlucha) and sapota in some parts of India (Tamil Nadu, Kerala, Karnataka, Andhra Pradesh), sapathilla or rata-mi in Sri Lanka, sobeda/sofeda (সবেদা or সফেদা) in eastern India and Bangladesh, sabudheli ("ސަބުދެލި") in Maldives, sawo in Indonesia and saos in West Sumatra, hồng xiêm (lit. Siamese persimmon), lồng mứt or xa pô chê in Vietnam, lamoot (ละมุด) in Thailand, Laos and Cambodia.
It is called ciku in standard Malay and sawo nilo in Kelantanese Malay. In Chinese, the name is mistakenly translated by many people roughly as "ginseng fruit" (人參果), though this is also the name used for the pepino, an unrelated fruit; it should instead be "heart fruit" (人心果) because it is shaped like the heart.
Note: wind, salt and dry tolerant!
V 67 (1 S)
76 ks