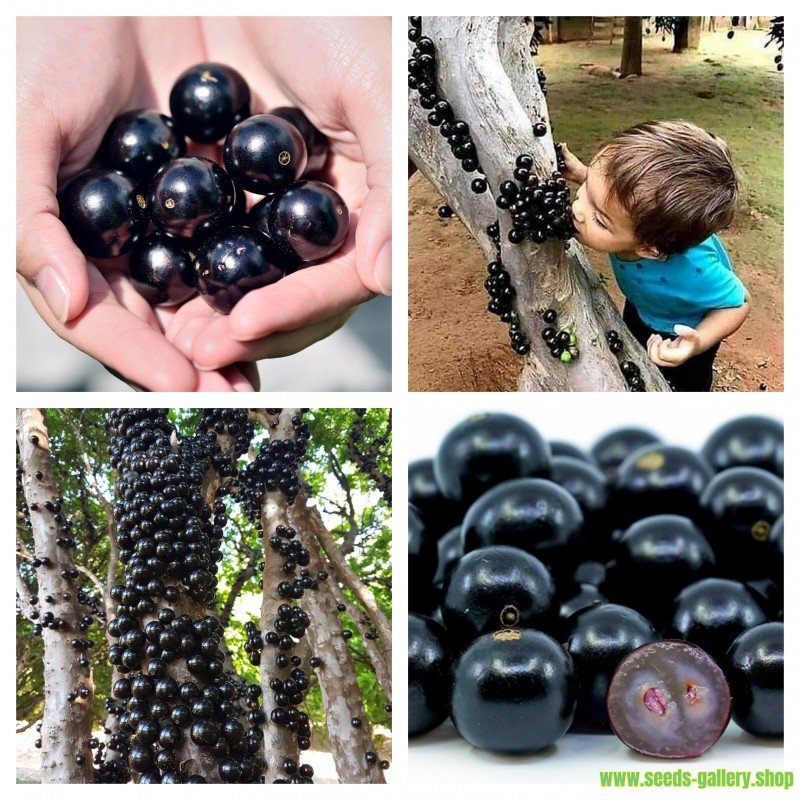 Jabuticaba (Plinia cauliflora) is the fruit of the Jabuticabeira tree in the family Myrtaceae native to Minas Gerais and Sao Paulo states in southeastern Brazil. Related species in the genus Myrciaria, often referred to by the same common name, are native to Brazil, Argentina, Paraguay, Peru, and Bolivia. The tree is grown for its purplish-black, white-pulped fruits; they can be eaten raw or be used to make jellies and drinks (plain juice or wine).

The tree is a slow-growing evergreen. It has salmon-colored leaves when they are young, which turn green as they mature. The tree prefers moist, rich, slightly acidic soil. It is widely adaptable, however, and grows satisfactorily even on alkaline beach-sand type soils, so long as they are tended and irrigated. Its flowers are white and grow directly from its trunk in a cauliflorous habit. In an uncultivated state, the tree may flower and fruit only once or twice a year, but when continuously irrigated it flowers frequently, and fresh fruit can be available year-round in tropical regions.

The fruit is a thick-skinned berry and typically measures 3–4 cm in diameter. The fruit resembles that of a slip-skin grape. It has a thick, purple, astringent skin that encases a sweet, white or rosy pink gelatinous flesh. Embedded within the flesh are one to four large seeds, which vary in shape depending on the species. Common in Brazilian markets, jabuticabas are largely eaten fresh; their popularity has been likened to that of grapes in the United States. Fresh fruit may begin to ferment 3 to 4 days after harvest, so they are often used to make jams, tarts, strong wines, and liqueurs. Due to the extremely short shelf-life, fresh jabuticaba fruit is very rare in markets outside of areas of cultivation. Traditionally, an astringent decoction of the sun-dried skins has been used as a treatment for hemoptysis, asthma, diarrhea, and gargled for chronic inflammation of the tonsils.

Several potent antioxidants and anti-inflammatory anti-cancer compounds have been isolated from the fruit. One that is unique to the fruit is jaboticabin.

In Brazil, the fruit of several related species, namely Myrciaria tenella and M. trunciflora, share the same common name. While all jabuticaba species are subtropical and can tolerate mild, brief frosts, some species may be marginally more cold-tolerant. Commercial cultivation of the fruit in the Northern Hemisphere is more restricted by extremely slow growth and the short shelf-life of fruit than by temperature requirements. Grafted plants may bear fruit in 5 years; seed grown trees may take 10 to 20 years to bear fruit, though their slow growth and small size when immature make them popular as bonsai or container ornamental plants in temperate regions. Jabuticabas are fairly adaptable to various kinds of growing conditions, tolerating sand or rich topsoil. They are intolerant of salty soils or salt spray. They are tolerant of mild drought, though fruit production may be reduced, and irrigation will be required in extended or severe droughts.