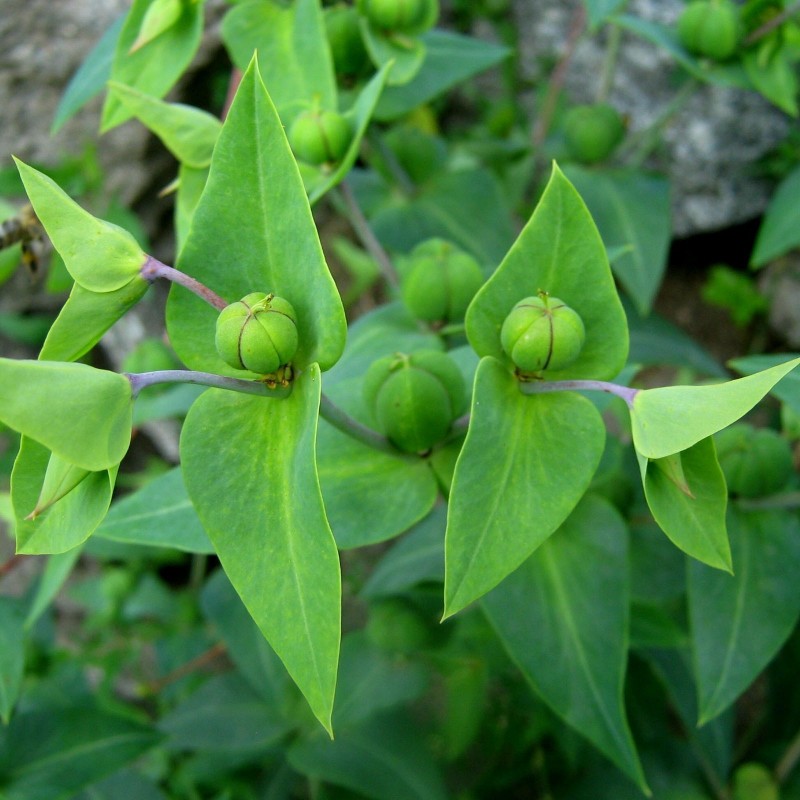 Euphorbia Lathyris is also commonly known as Mole Plant, Paper Spurge, Gopher Plant, Caper Spurge, or Gopher Spurge. It is an ornamental plant that grows up to 1 meter (5 ft) in height.

Euphorbia Lathyris is also commonly known as Mole Plant, Paper Spurge, Gopher Plant, Caper Spurge, or Gopher Spurge. It is an ornamental plant that grows up to 1 meter (5 ft) in height. The plant is mostly characterized as part of the Euphorbia family because of the milky white sap it emits when cut. The leaves are narrow and taper either the apex of the base thus earning them the term Lanceolate and they have milky white midveins. The flowers themselves tend to be inconspicuous and are yellow-green to green in color. An attractive plant that is native to southern Europe, South Africa, and Asia is a biennial that is classified as extremely toxic to humans and animals if ingested and it is also a skin irritant when handled improperly because of the latex it produces. It's known uses include its ability to repel moles and any other subterranean pests. The French are said to have eaten the seeds as a purgative even though they are as toxic as the plant.

Growing information: Some seeds rely on the temperature change from winter to spring in order to break dormancy and the seeds of this plant fall into that category. In order to germinate them, the seeds need to be either planted outside during early spring at least 2-3 weeks prior to the expected heat surge or they need to be kept in a refrigerator for as long before planting.

It is an erect biennial (occasionally annual) plant growing up to 1.5 m tall, with a glaucous blue-green stem. The leaves are arranged in decussate opposite pairs, and are lanceolate, 5–15 cm long and 1-2.5 cm broad, glaucous blue-green with a waxy texture and pale greenish-white midrib and veins. The flowers are green to yellow-green, 4 mm diameter, with no petals. The seeds are green ripening brown or grey, produced in globular clusters 13–17 mm diameter of three seeds compressed together.

All parts of the plant, including the seeds and roots are poisonous. Handling may cause skin irritation as the plant produces latex. While poisonous to humans and most livestock, goats sometimes eat it and are immune to the toxin. However, the toxin can be passed through the goat's milk.

Away from its native range, it is widely naturalised in many regions, where it is often considered an invasive weed. It grows in partial shade to full sun in USDA zones 5–9.

The Mole Plant is sold by some nurseries as it is believed to repel moles. It is used in folk medicine as a poison, antiseptic, and a purgative. It is used as a folk remedy for cancer, corns, and warts.