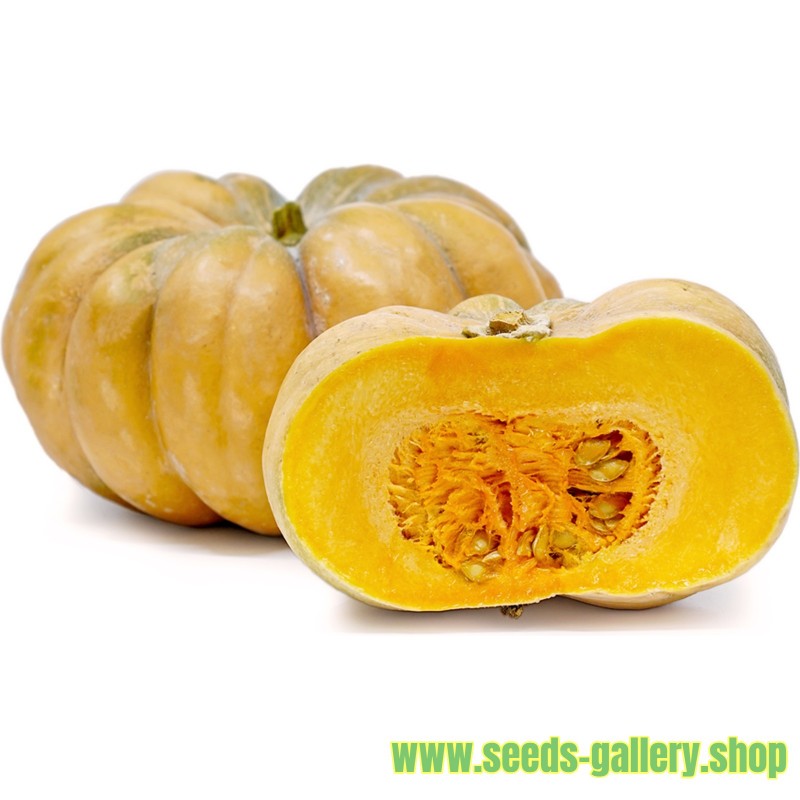 C. moschata 105 days A longtime favorite on Long Island, very popular for pies. Flat, lightly ribbed fruit look like a wheel of cheese with buff colored skin. A very good keeper of excellent quality, 6-10 lbs. each, a beautiful heirloom variety. Before European colonists arrived in America, many nations of

Before European colonists arrived in America, many nations of Native Americans lived from the land. They shared food preservation techniques as well as the Three Sister practice of growing corn, beans, and squash with the European colonists.

Pumpkin, an American native that is a cultivar of the squash plant, is celebrated as a symbol of autumn, and harvested for both decoration and good eating. The Long Island Cheese Pumpkin is one of the oldest varieties cultivated in America. Well suited for the region’s climate, it is an invaluable part of Long Island food history, culture, and tradition, and a delicious choice for many types of cooking.

In the 1800s, cookbooks and farmers almanacs in the Long Island Sound frequently cited the Long Island Cheese Pumpkin as a regional favorite, and in 1807, Bernard McMahon introduced the pumpkin to the commercial market. In an issue of “Michigan Farmer” from 1855, D.D. Tooker noted, “the sweet pumpkin alias cheese pumpkin or pie squash is the only true article in my opinion for making the most delicious of Yankee notions - pumpkin pie - and I am not alone in my opinions, for I have yet to see the individual who would not agree with me in this matter. The shape and color of this fruit resembles that of a small sized dairy cheese, its flesh is very firm, fine grained and brittle, is of a rich color and very sweet. They will keep all winter in a cool dry cellar if picked and stored before Jack Frost touches them”.

This traditional variety is native to the states of New York and New Jersey. The type of squash "cheese" were reported in the US since 1815 but we found a painting with the painter Lucas Van Valkenborch (1530-1597) at the Museum Kunsthistoriches in Vienna.

The Long Island Cheese Pumpkin has light burnt sienna-colored rind, a distinctive stem, and flesh that is raw sienna-colored, dense, sweet, earthy, and savory. It is very versatile and most parts of the plant are edible - shell, flesh, seeds, and flowers. Ripe flesh can be boiled, baked, steamed, pickled, or roasted, and enjoyed in soups, purees, desserts, preserves, pasta, and stews. The flavor can be elevated with other fall vegetables, ranging all the way from turnips to celeriac. If it is the seeds you are interested in, pumpkin seed oil can have savory flavor notes of sesame, roasted mushrooms, or pistachio, and goes great on salads, soups, and vegetable dishes. With a high smoking point, it is a stable oil for cooking and can serve in place of canola, grape seed, or olive oil.

Another culinary use of pumpkin is the growing demand for seasonally infused American craft beers. Pumpkin beer has a long history in New England: when colonists first settled America, malt had to be either imported or grown and malted, a costly and fickle endeavor. Pumpkins grew plentifully and had a high enough sugar content that they could be added to the mash and fermented.

The seed of the Long Island Cheese Pumpkin was available through seed retailers up until the 1960s, but then it began to disappear.  Seed sources were positioning different varieties like Dickinson and Kentucky Field pumpkins instead. Dickinson and similar pumpkin hybrids were better for new harvesting equipment, easily rolled off the conveyors, and were smoother skinned rather than ribbed for easy peeling and processing. In short, Midwestern pumpkin varieties complemented all the components of the growing canned pumpkin industry, and slowly this beautiful Long Island heirloom got lost in the modernization of seed and food production. Even farmers on Long Island were no longer saving seeds.

In the late 1970s, Ken Ettlinger, a local seed saver and natural science educator, began to notice fewer heirloom varieties, including the Cheese Pumpkin, being offered in his community.  He decided to establish a regional seed bank called the Long Island Seed Project to conserve the genetic resources of Long Island.  His effort to safeguard genetic biodiversity and strengthen food security in Long Island was plagued with challenges from laws and regulations on plant genetics; nonetheless, he persevered, and with the support of the Northeast Organic Farmers Association of New York, Cornell, Oregon State University, and the University of Connecticut, the Seed Project became a reality. Today, the Project restores varieties like the Long Island Cheese Pumpkin suited for the local culture and ecological agriculture systems, and educates farmers and consumers on breeding techniques and seed saving.