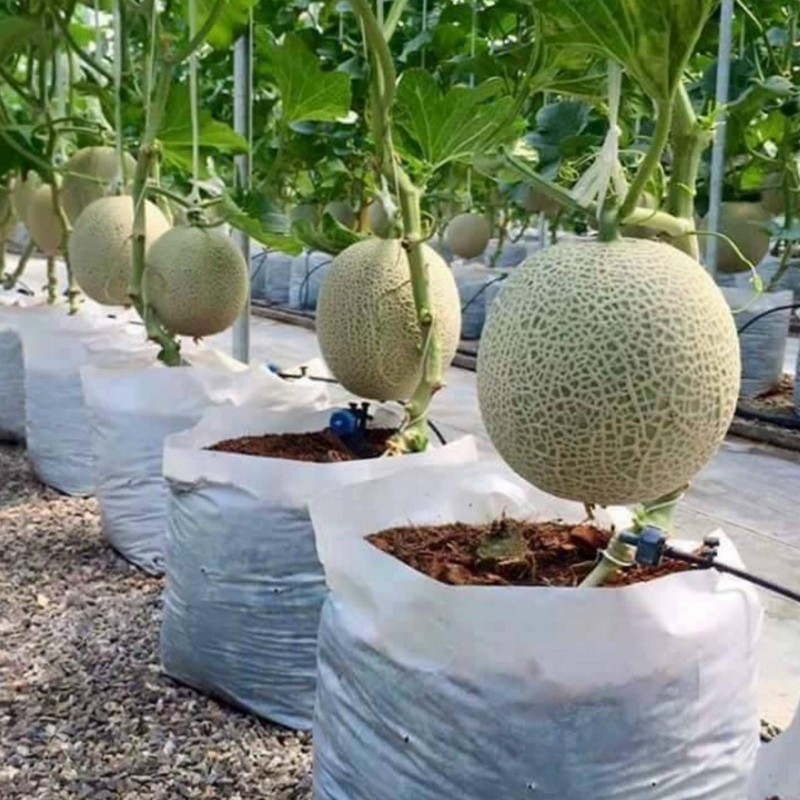 The succulent flavor of vine-ripened melons is worth the special effort it takes to grow them. Homegrown melons outshine those from the grocery store because melons pack up on sugar during their final days of growth—commercial melons just can’t compete because they’re picked a

The succulent flavor of vine-ripened melons is worth the special effort it takes to grow them. Homegrown melons outshine those from the grocery store because melons pack up on sugar during their final days of growth—commercial melons just can’t compete because they’re picked a little green for shipping.
Most melons need nutrient-rich soil, plenty of sunshine, and at least 3 to 4 months of warm weather. Melons can take up lots of space. A single watermelon vine, for example, can sprawl across 100 square feet and produce only two fruits; muskmelons, on the other hand, can provide at least a dozen fruits in a 16-square-foot area. If you have limited space, try bush cultivars, or grow standard types vertically on a strong fence or trellis.
Types: What we call cantaloupes are actually muskmelons. This class of melon has pumpkin-like ribbing and skin covered with a netting of shallow veins. Its fragrant flesh ranges from salmon to green. ‘Athena’ and ‘Pulsar’ are popular cultivars for home gardens. True cantaloupes, grown mostly in Europe, have orange flesh and rough, scaly skin with dark, distinct veins.
Winter melons (also a type of muskmelon) ripen as the weather starts to turn cool and will keep for fairly long periods if stored properly. This group includes honeydews, crenshaws, casabas, and Persians. These larger, more oval fruits have waxy skins that can be smooth or wrinkled, with less-fragrant flesh.
Winter melons require a growing season of well over 100 days and are more susceptible to diseases, but they’re certainly delicious. Honeydews such as ‘Earlidew’ have smooth, creamy white skins and lime green flesh that takes on a slight golden tinge when mature. Crenshaws have salmon pink flesh with a distinctive flavor. The tenderness of their dark green skins makes them difficult to ship. Casabas have wrinkled, golden skins and white flesh that stays sweet and juicy over a long period. Large, round Persian melons have thick, orange flesh.
Watermelons fall under a different botanical classification, Citrullus lanatus, but they thrive under the same cultural conditions that other melons require. Compact cultivars such as ‘Sugar Baby’ and ‘Petite Treat” (which is also seedless) are perfect for smaller home gardens. ‘Petite Yellow’ is one of several small yellow-fleshed cultivars for home gardens.

Melons need the sunniest spot possible with plenty of air circulation to help them dry out quickly after rain and prevent disease. Melon roots usually extend from 2 to 10 inches into the earth, but some go as deep as 4 to 5 feet. Therefore, the soil must be loose and moisture retentive but well drained. Since melons will be one of the last things you plant in your vegetable garden, you might want to give them an extra boost by working 2 to 3 inches of compost into the planting area.
Vines may not set fruit if they are chilled as seedlings, so don’t plant until the soil has warmed to between 70° and 80°F. Get a head start by planting seeds indoors in 4-inch peat pots. Start them just 2 to 4 weeks before transplanting, because seedlings that develop tendrils or more than four leaves may have difficulty later in establishing roots. Sow several seeds ½ inch deep in each pot, and place the pots in a south-facing window or other sunny spot. Provide bottom heat if necessary to bring the soil temperature to 75°F. Thin 2-inch-tall seedlings to the strongest plant by cutting the others off at soil level. A few days before planting, harden off the seedlings by setting them outdoors in a sunny area during the day and bringing them in at night.
You can grow large crops in rows, but most melons seem to do better in hills. For most cultivars, space hills 4 to 6 feet apart; vigorous growers like watermelons may require 6 to 12 feet between hills, while some bush types need only 2 feet.
When planting directly in the garden, sow six seeds per hill no earlier then 2 weeks after the last frost date. Thin to two or three plants per hill, or in short-season areas, thin to only one plant per hill, so it won’t have to compete with the other vines for nutrients.
In colder climates, lay black plastic or black paper mulch a few weeks prior to planting or transplanting to warm up the soil and keep it warm once the plants are in the ground. Anchor the mulch securely to keep it from shifting and covering young plants. You can also use hotcaps, such as plastic jugs with the bottom cut out, to keep seedlings warm.

Growing guidelines:If you’re not using paper mulch, apply several inches of organic mulch just as the vines start to elongate. This covering will suppress weeds and help keep the fruits clean and disease free. Provide generous amounts of water, particularly right after transplanting and as the fruits develop.

Male flowers appear first, at leaf joints on the main stem and on larger side shoots. Around a week later, fruit-producing female flowers form on secondary side shoots. Despite the many female blossoms, each vine will produce only three or four melons. Most young melons will grow to the size of an egg, then shrivel as they send their nutrients back into the vines. Fertilize with compost tea when the fruits set and again 2 weeks later.
Though melon vines look very robust, they are actually quite delicate—always handle them carefully. If they start to sprawl outside the area where you wish them to grow, gently guide them back toward the center of the planted area.
In areas colder than about Zone 7, remove flowers and smaller fruits from the vines after midsummer; these won’t have time to mature before frost, and they use up energy that should go into ripening the two or three larger fruits you’ve left on each vine.
Problems: Striped and spotted cucumber beetles can be serious pests. The beetles, which spread bacterial wilt as they feed, tend to be more destructive to direct-seeded plants than to transplants. They often attack around the time the plants flower. Tents of cheesecloth, mosquito netting, or floating row covers are the best protection from beetles, but you must remove these coverings when female flowers form so that bees can pollinate them. Spraying young plants with kaolin clay may deter beetles from feeding. You can also use a hand-held vacuum cleaner to remove beetles from the plants (dump the collected beetles into soapy water to kill them). As a last resort to fight a cucumber beetle infestation, spray a pyrethrin product.
Melon aphids can also be a problem.
Squash vine borers, which eat their way up the stem of a plant and cause the leaves to wilt, may also attack melons. See the squash growing guide for information on this pest.
Resistant cultivars and crop rotation are the best defenses against melon diseases, including downy and powdery mildews. Mildews are common in wet weather. Downy mildew produces yellow spots on leaf surfaces, with purplish areas on the undersides. Powdery mildew causes powdery white areas on leaves and stems. Even a small amount of mildew can affect the sweetness of melons because the fungus will siphon off the vine’s sugar to fuel its own growth. Sprays of potassium bicarbonate (or baking soda) can help prevent powdery mildew. Cut off and destroy any affected branches.
Bacterial wilt produces limp leaves and stems that secrete a white sticky substance when cut. Remove and destroy affected plants. Reduce the chances of bacterial wilt by controlling cucumber beetles and aphids.

The stem of a vine-ripened fruit should break cleanly with no pressure at all on the stem; just picking up the fruit should be sufficient. You can often judge the ripeness of cantaloupes and muskmelons by scent alone.
Some gardeners determine the ripeness of a watermelon by thumping it, with a resulting ringing sound if it’s green and a dull or dead sound if it’s ripe. However, a dull or dead sound can also mean that the fruit is overripe. Other growers harvest when the “pig’s-tail” curl where the watermelon attaches turns brown, but on some cultivars this tail dries up at 7 to 10 days 380before the fruit is ripe. Instead, look at the bottom surface or “ground spot” on a watermelon. If it has turned from a light straw color to gold, orange, or rich yellow, it’s ripe for picking.
Storage time for various melons kept in a cool place can vary from 2 weeks for a cantaloupe to 8 weeks for a casaba.
0000033