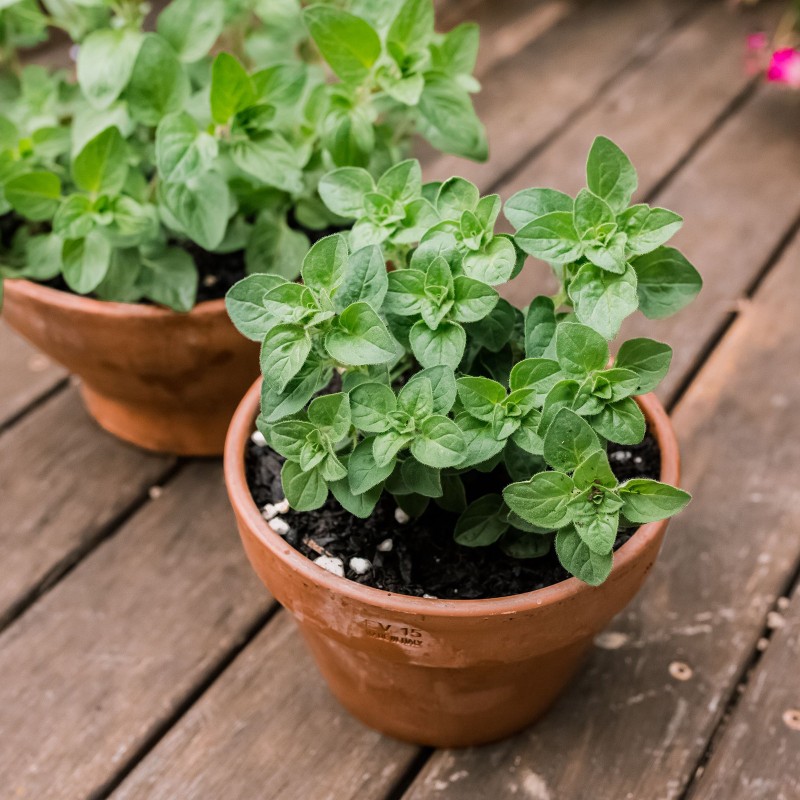 Culinary oregano is a signature flavor of many Italian, Mexican and Spanish dishes. Most cooks are familiar with it in its dried form, but oregano is a hardy perennial plant that is easy to grow in the home garden. A handful of plants will provide you with enough oregano to use fresh in season and to dry for use throughout the winter.
There are many varieties, but the most common variety for cooking is 'Greek' oregano.
Exposure:
Full sun
Golden oregano does best in partial shade; its leaves tend to scorch in full sun.
Mature Size:
Oregano can reach a height of 30", but usually grows between 8-12", especially if you are harvesting regularly. Plants will spread about 18" and will send out runners.
Bloom Period/Days to Harvest:
As with most herbs, oregano leaves taste best before the plant flowers. You can begin harvesting when plants have reached 4-5 inches in height. Cutting stems all the way back to the ground will encourage more stems and a fuller plant.
The stems tend to get woody and the easiest way to strip the leaves is to hold the stem by the top, uncut end and run your finger down the stem.
Foliage: Oregano leaves are oval, dark green and in opposite pairs. Some varieties have fuzzy leaves, others not.
Flowers: The flowers stalks are spiky and may be white, pink or purple.
Oregano starts out as a ground hugging rosette of leaves, but it can easily grow to about 2' tall.
Design Suggestions:
Although it is grown predominately as a culinary herb, oregano makes a nice edging plant and ground cover, requiring little maintenance. The smaller varieties also do well in rock and alpine gardens.
Varieties:
There are many named oreganos, but the common names tend to vary by region:
'Greek Oregano', the variety usually used in Mediterranean cooking, is O. heracleoticumThis is the type we associate with oregano flavor. You may also see Oregano onites listed as Greek oregano.
O. vulgare is known as 'Common Oregano', 'Wild Marjoram' and 'Pot Marjoram'. Marjoram is a type of oregano with a less pungent, sweeter taste, often used in French and English cooking.
Growing Tips:
Starting Plants: Plants can be started from seeds, divisions or cuttings. Since different species of oregano will cross pollinate, you may not get what you expect from seed.
Oregano seeds require some light to germinate, so cover only slightly with soil. Start seedsindoors and transplant when temperatures remain above 45 degrees F.
Oregano plants are widely available in nurseries and through specialty catalogs.
Planting: Oregano is one of those 'Mediterranean' herbs that like well-drained soil, on the lean side, and full sun. Rich soil tends to dilute the pungency of the flavor. Climate, soil and moisture can cause variation in oregano’s flavor. The genus is native to the Mediterranean area, but O. vulgare has naturalized in many areas, including the eastern United States.
Maintenance: The flowers should be pinched to keep the plants bushy and prevent them bolting to seed.
Divide plants when the centers begin to die out or the stems become too woody. You can also divide plants simply to make more plants.
Oregano may need some winter protection in Zones 5 and lower. Covering the plants with an evergreen bough, after the ground has frozen, will protect them from wind damage.
Problems: Few pests bother oregano. Keep an eye out for spider mites and aphids.
Harvesting: Once the plant has reached 4-5", sprigs can be taken. Harvesting before the plant blooms will yield the most flavorful leaves. Levels of essential oils diminish as the flowers begin to develop.
Uses: It’s the leaves that are used for flavoring foods. They retain their flavor better in hot dishes if added toward the end of cooking. Heating too long results in bitterness. Dried oregano has a stronger taste than fresh.
There are plants outside of the Origanum genus that are sometimes referred to as oregano.
'Mexican Oregano' can mean either Lippia graveolens or Poliomintha longiflora. They are considered similar in flavor, but stronger than oregano.
In Puerto Rico and Cuba, Plectranthus anboinicus can be found labeled as oregano.
Thymus nummularius is often used in place of oregano, in Spain.
MHS 2 (0,3g)
0 Elemek