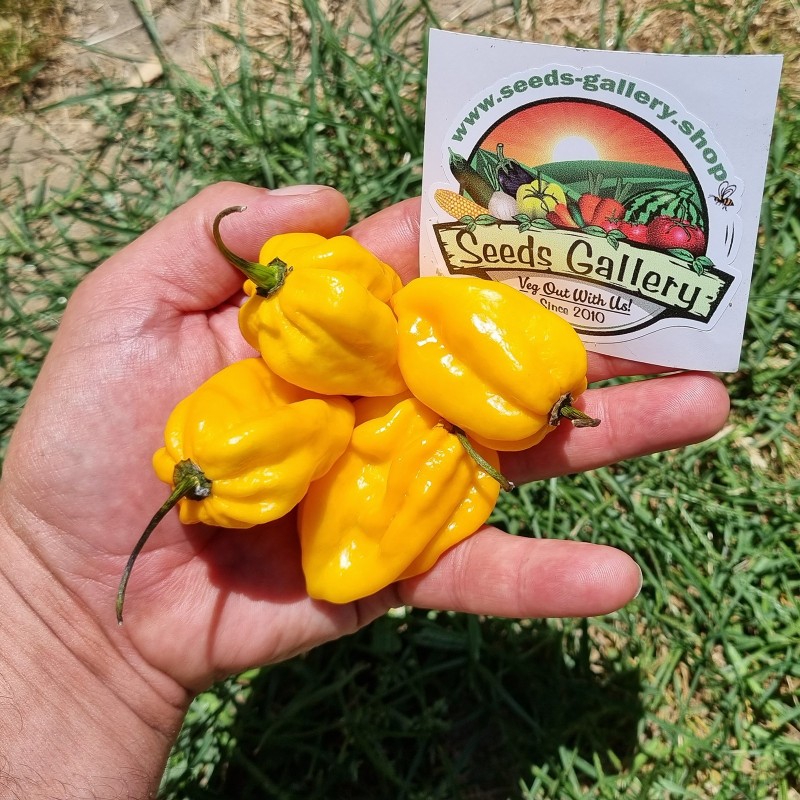 The habanero is a variety of chili pepper. Unripe habaneros are green, and they color as they mature. The most common color variants are orange and red, but the fruit may also be white, brown, yellow

Origin and current use
The habanero chili comes from the Amazon, from which it was spread, reaching Mexico. A specimen of a domesticated habanero plant, dated at 8,500 years old, was found at an archaeological site in Peru.[citation needed] An intact fruit of a small domesticated habanero, found in pre-ceramic levels in Guitarrero Cave in the Peruvian highlands, was dated to 6500 BC.

Cultivation
Habaneros thrive in hot weather. Like all peppers, the habanero does well in an area with good morning sun and in soil with a pH level around 5 to 6 (slightly acidic). Habaneros which are watered daily produce more vegetative growth but the same number of fruit, with lower concentrations of capsaicin, as compared to plants which are watered only when dry (every seven days). Overly moist soil and roots will produce bitter-tasting peppers. Daily watering during flowering and early setting of fruit helps prevent flower and immature fruit from dropping, but flower dropping rates are reported to often reach 90% even in ideal conditions.

Cultivars
Several growers have attempted to selectively breed habanero plants to produce hotter, heavier, and larger peppers. Most habaneros rate between 200,000 and 300,000 on the Scoville scale. In 2004, researchers in Texas created a mild version of the habanero, but retained the traditional aroma and flavor. The milder version was obtained by crossing the Yucatán habanero pepper with a heatless habanero from Bolivia over several generations.
Black habanero is an alternative name often used to describe the dark brown variety of habanero chilis (although they are slightly different, being slightly smaller and slightly more sphere-shaped). Some seeds have been found which are thought to be over 7,000 years old. The black habanero has an exotic and unusual taste, and is hotter than a regular habanero with a rating between 400,000 and 450,000 Scoville units. Small slivers used in cooking can have a dramatic effect on the overall dish. Black habaneros take considerably longer to grow than other habanero chili varieties. In a dried form, they can be preserved for long periods of time, and can be reconstituted in water then added to sauce mixes. Previously known as habanero negro, or by their Nahuatl name, their name was translated into English by spice traders in the 19th century as "black habanero". The word "chocolate" was derived from the Nahuatl word, xocolātl [ʃoˈkolaːt͡ɬ], and was used in the description, as well (as "chocolate habanero"), but it proved to be unpronounceable to the British traders, so it was simply named "black habanero".