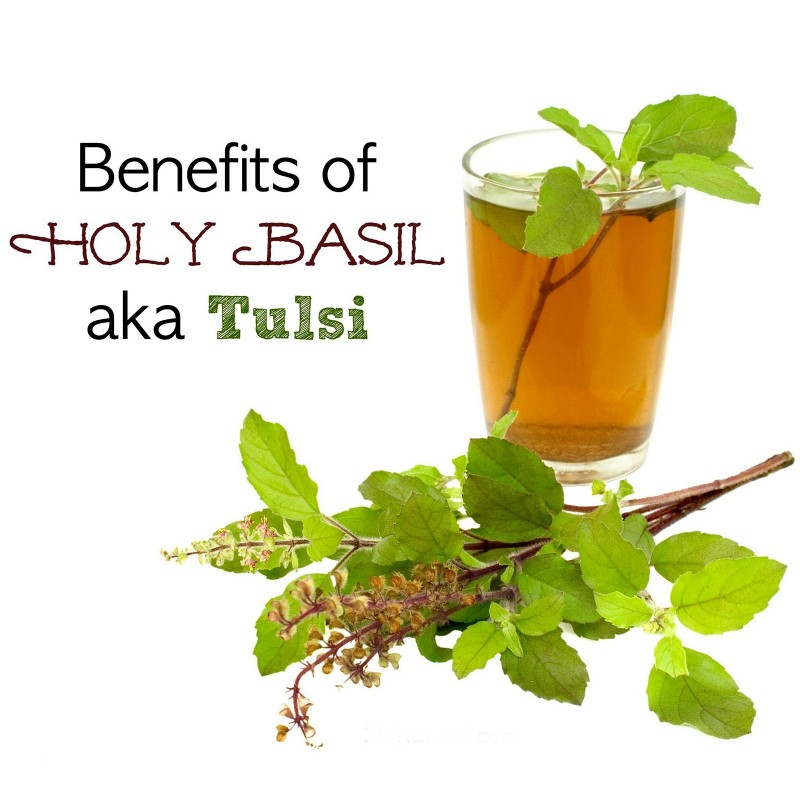 This kind of Basil has a spicy, peppery, clove-like taste, maybe the basil Thai people love most and is at least used in all street kitchens and restaurants in the country. Ocimum tenuiflorum, also known as Ocimum sanctum, holy basil, or tulasi or tulsi

This kind of Basil has a spicy, peppery, clove-like taste, may be the basil Thai people love most and is at least used in all street kitchens and restaurants in the country.

Ocimum tenuiflorum, also known as Ocimum sanctum, holy basil, or tulasi or tulsi (also sometimes spelled thulasi), is an aromatic plant in the family Lamiaceae which is native to the Indian subcontinent and widespread as a cultivated plant throughout the Southeast Asian tropics.[2][3] It is an erect, many-branched subshrub, 30–60 cm (12–24 in) tall with hairy stems and simple phyllotaxic green or purple leaves that are strongly scented.

Leaves have petioles and are ovate, up to 5 cm (2.0 in) long, usually slightly toothed. The flowers are purplish in elongate racemes in close whorls.[3] The two main morphotypes cultivated in India and Nepal are green-leaved (Sri or Lakshmi tulasi) and purple-leaved (Krishna tulasi).[4]

Tulasi is cultivated for religious and medicinal purposes, and for its essential oil. It is widely known across the Indian subcontinent as a medicinal plant and a herbal tea, commonly used in Ayurveda, and has an important role within the Vaishnava tradition of Hinduism, in which devotees perform worship involving holy basil plants or leaves. This plant is revered as an elixir of life.

DNA barcodes of various biogeographical isolates of Tulsi from the Indian subcontinent are now available. In a large-scale phylogeographical study of this species conducted using chloroplast genome sequences, a group of researchers from Central University of Punjab, Bathinda, have found that this plant originates from North Central India.[5][6] The discovery might suggest the evolution of Tulsi is related with the cultural migratory patterns in the Indian subcontinent.

Tulsi leaves are an essential part in the worship of Vishnu and his avatars, including Krishna and Ram, and other male Vaishnava deities such as Hanuman, Balarama, Garuda and many others. Tulsi is a sacred plant for Hindus and is worshipped as the avatar of Lakshmi.[7] It is believed that water mixed with the petals given to the dying raises their departing souls to heaven.[8] Tulsi, which is Sanskrit for "the incomparable one", is most often regarded as a consort of Krishna in the form of Lakshmi.[9][10] According to the Brahma Vaivarta Purana, tulsi is an expression of Sita.[11][full citation needed] There are two types of tulsi worshipped in Hinduism: "Rama tulsi" has light green leaves and is larger in size; "Shyama tulsi" has dark green leaves and is important for the worship of Hanuman.[12] Many Hindus have tulasi plants growing in front of or near their home, often in special pots. Traditionally, tulsi is planted in the centre of the central courtyard of Hindu houses. It is also frequently grown next to Hanuman temples, especially in Varanasi.[13][full citation needed]

According to Vaishnavas, it is believed in Puranas that during Samudra Manthana, when the gods win the ocean-churning against the asuras, Dhanvantari comes up from the ocean with Amrit in hand for the gods. Dhanvantari, the divine healer, sheds happy tears, and when the first drop falls in the Amrit, it forms tulasi. In the ceremony of Tulsi Vivaha, tulsi is ceremonially married to Krishna annually on the eleventh day of the waxing moon or twelfth of the month of Kartik in the lunar calendar. This day also marks the end of the four-month Chaturmas, which is considered inauspicious for weddings and other rituals, so the day inaugurates the annual marriage season in India. The ritual lighting of lamps each evening during Kartik includes the worship of the tulsi plant, which is held to be auspicious for the home. Vaishnavas especially follow the daily worship of tulsi during Kartik.[14] In another legend, Tulsi was a pious woman who sought a boon to marry Vishnu. Lakshmi, Vishnu's consort, cursed her to become a plant in earth. However, Vishnu appeased her by giving her a boon that she would grace him when he appears in the form of Shaligrama in temples.[15]

Vaishnavas traditionally use Hindu prayer beads made from tulsi stems or roots, which are an important symbol of initiation. Tulsi rosaries are considered to be auspicious for the wearer, and believed to put them under the protection of Hanuman. They have such a strong association with Vaishnavas, that followers of Hanuman are known as "those who bear the tulsi round the neck".

Tulasi (Sanskrit:-Surasa) has been used for thousands of years in Ayurveda for its diverse healing properties. It is mentioned in the Charaka Samhita,[16] an ancient Ayurvedic text. Tulsi is considered to be an adaptogen,[17] balancing different processes in the body, and helpful for adapting to stress.[18] Marked by its strong aroma and astringent taste, it is regarded in Ayurveda as a kind of "elixir of life" and believed to promote longevity.

Tulasi extracts are used in ayurvedic remedies for a variety of ailments. Traditionally, tulasi is taken in many forms: as herbal tea, dried powder, fresh leaf or mixed with ghee. Essential oil extracted from Karpoora tulasi is mostly used for medicinal purposes and in herbal cosmetics.

The leaves of holy basil, known as kaphrao in the Thai language (Thai: กะเพรา), are commonly used in Thai cuisine. Kaphrao should not be confused with horapha (Thai: โหระพา), which is normally known as Thai basil, or with Thai lemon basil (maenglak; Thai: แมงลัก).

The best-known dish made with this herb is phat kaphrao (Thai: ผัดกะเพรา) — a stir-fry of Thai holy basil with meats, seafood or, as in khao phat kraphao, with rice.

For centuries, the dried leaves have been mixed with stored grains to repel insects.[24] In Sri Lanka this plant is used as a mosquito repellent. Sinhala: Maduruthalaa

Some of the main chemical constituents of tulsi are: oleanolic acid, ursolic acid, rosmarinic acid, eugenol, carvacrol, linalool, β-caryophyllene (about 8%), β-elemene (c.11.0%), and germacrene D (about 2%).

The genome of Tulsi plant has been sequenced and the draft genome has been published independently by research teams from CSIR-Central Institute of Medicinal and Aromatic Plants at Lucknow and National Centre for Biological Sciences at Bengaluru. The genome size was estimated to be 612 mega bases and results from the sequencing project show that certain metabolite-biosynthesis genes such as genes for biosynthesis of Anthocyanin in Krishna Tulsi variety, Ursolic acid and Eugenol in Rama Tulsi variety were expressed in large quantities. These metabolites were shown to have anti-cancerous properties as well. It was further commented that these metabolites could be utilized as anti-cancerous drugs.