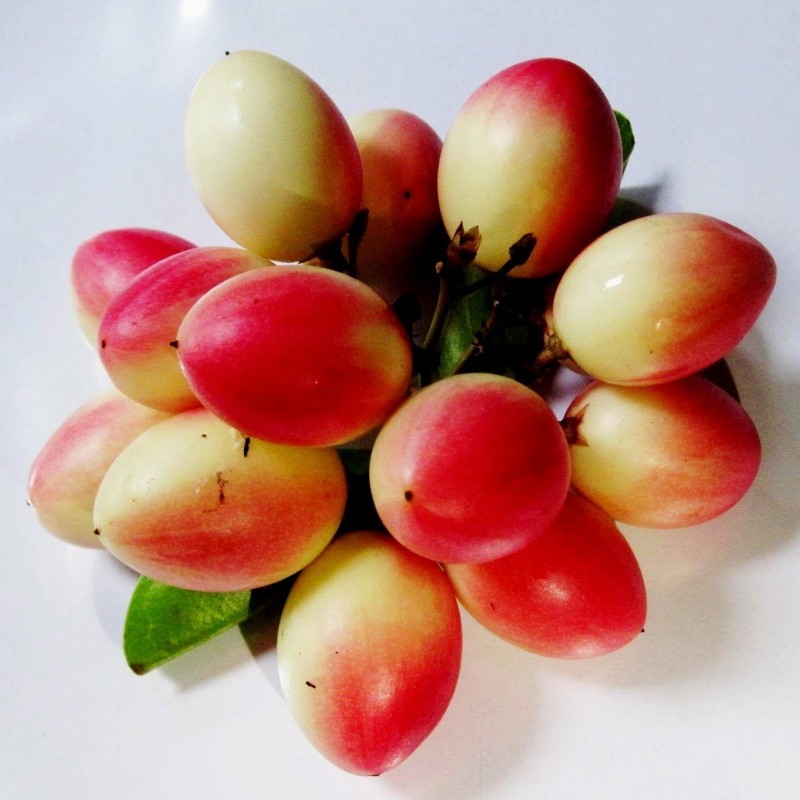 Karanda carissa is a very decorative plant when fruiting. The young fruits are white, white- pink, deep-pink to reddish and then goes deep black when fully ripe, what makes it so attractive especially when the fruits are half white and half pink. This plant have spines on the branches and have green roundish glossy leaves. Fruits are rather acid and in Mauritius are very popular in pickles. Having said so it is becoming a rather rare plant-fruit. It is more known as Karanda here also but also called "coeur demoiselle“ which means girl's heart; because of the bi coloured fruits before it ripes.

Carissa carandas is a species of flowering shrub in the dogbane family, Apocynaceae. It produces berry-sized fruits[1] that are commonly used as a condiment in Indian pickles and spices. It is a hardy, drought-tolerant plant that thrives well in a wide range of soils. Common names include "bengal currant" (English), "করমচা" (Bangla), karonda (Devanagari: करोंदा), karamardaka (Sanskrit), kauLi hannu/ಕೌಳಿ ಹಣ್ಣು (Kannada), kali maina/कालि मैना (Marathi),karauna (Maithili), vakkay (Telugu), maha karamba/මහ කරඹ (sinhala), kilaakkaai/கிளாக்காய் (Tamil), มะม่วงไม่รู้หาว มะนาวไม่รู้โห่ (short: มะนาวไม่รู้โห่ or มะม่วงหาวมะนาวโห่) (Thai). Other names less widely used include: karau(n)da, karanda, or karamda.[2][3] It is called kerenda in Malaya, karaunda in Malaya and India; Bengal currant or Christ's thorn in South India; nam phrom, or namdaeng in Thailand; and caramba, caranda, caraunda and perunkila in the Philippines.[4] In Assam it is called Karja tenga. In Bengali it is called as Koromcha.

Carissa carandas grows naturally in the Himalayas at elevations of 30 to 1,800 metres (98 to 5,906 ft), in the Siwalik Hills, the Western Ghats and in Nepal and Afghanistan. It flourishes well in regions with high temperatures. In India it is grown on a limited scale in Rajasthan, Gujarat, Bihar, West Bengal and Uttar Pradesh. It is also grows in the Sri Lanka lowland rain forests.

The plant is grown from seed sown in August and September. Vegetative propagation also is practiced in the form of budding and inarching. Cuttings may also succeed. The first monsoon shower is planting time. Plants raised from seed start bearing two years after planting. Flowering starts in March and in Northern India the fruit ripens from July to September.

Isolation of many terpenoids has been reported. In particular mixture of sesquiterpenes namely carissone  and carindone as a novel type of C31 terpenoid have been reported. Other products include pentacyclic triterpenoid carissin.

The fruit is a rich source of iron, so it sometimes used in treatment of anaemia.[citation needed] It contains a fair amount of Vitamin C and therefore is an antiscorbutic.

Mature fruit is harvested for pickles. It contains pectin and accordingly is a useful ingredient in jelly, jam, syrup and chutney. Ripe fruits exude a white latex when severed from the branch.

The roots of the plant are heavily branched, making it valuable for stabilizing eroding slopes.