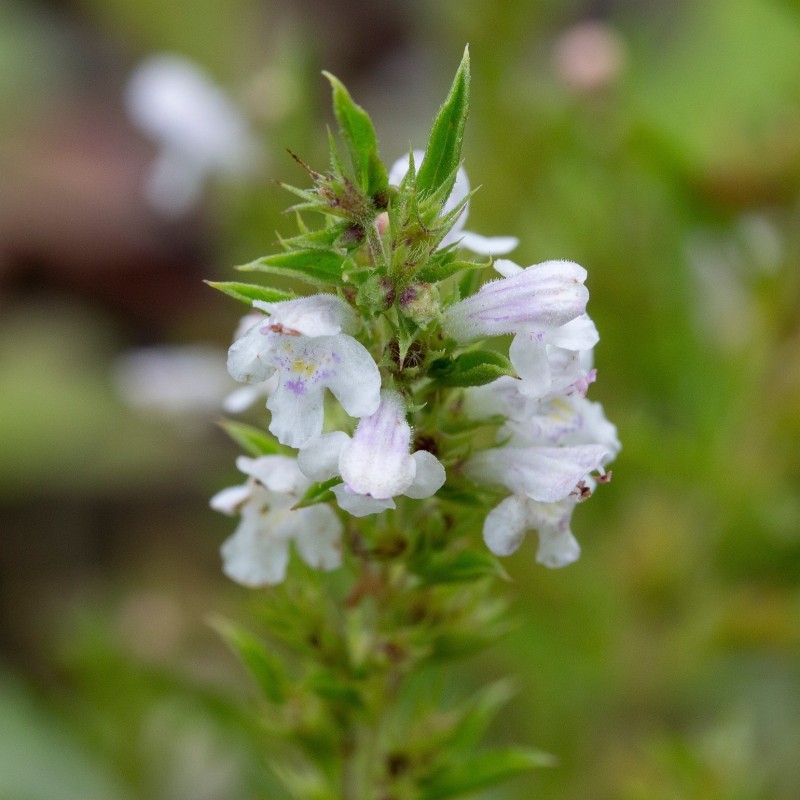 Winter savory (Satureja montana) is a perennial herb in the family Lamiaceae, native to warm temperate regions of southern Europe and Mediterranean. It is a perennial plant growing to 16 in (41 cm) tall. The leaves are opposite, oval-lanceolate

Winter savory (Satureja montana) is a perennial herb in the family Lamiaceae, native to warm temperate regions of southern Europe and Mediterranean.

It is a perennial plant growing to 16 in (41 cm) tall. The leaves are opposite, oval-lanceolate, 1–2 cm long and 5 mm broad. The flowers are white.

Easy to grow, it makes an attractive border plant for any culinary herb garden. It requires six hours of sun a day in soil that drains well. S. montana 'Nana' is a dwarf cultivar. In temperate climates it goes dormant in winter, putting out leaves on the bare stems again in the spring – do not cut the plant back, all those stems which appear dead will leaf out again. It is hardy and has a low bunching habit.

Winter savory has been used for hundreds of years. Both it and summer savory has been grown and used, virtually side by side. Both have strong spicy flavor. It goes particularly well with any type of mushroom, or in white sauces, and is very good in potato salads. Small amounts spice a regular salad well. It has a rich herbaceous aroma when crushed.

It is used as a companion plant for beans, keeping bean weevils away, and also roses, reducing mildew and aphids.

In cooking, winter savory has a reputation for going very well with both beans and meats, very often lighter meats such as chicken or turkey, and can be used in stuffing. It has a strong flavor while uncooked but loses much of its flavor under prolonged cooking.

Winter savory has been purported to have antiseptic, aromatic, carminative, and digestive benefits.[3] It has also been used as an expectorant and in the treatment of stings.

The plant has a stronger action than the closely related summer savory.

Taken internally, it is said to be a remedy for colic and a cure for flatulence, whilst it is also used to treat gastroenteritis, cystitis, nausea, diarrhea, bronchial congestion, sore throat, and menstrual disorders. It should not be prescribed for pregnant women.[citation needed] A sprig of the plant, rubbed onto bee or wasp stings, brings instant relief.

Therapeutic-grade oil has been determined to inhibit the growth of Candida albicans.

The plant is harvested in the summer when in flower and can be used fresh or dried. The essential oil forms an ingredient in lotions for the scalp in cases of incipient baldness. An ointment made from the plant is used externally to relieve arthritic joints.

The site needs to have sandy soil and get plenty of sunlight. Press the seed into the soil and keep watered. It germinates better without a covering of soil. Transplant when large enough. Germination is rather erratic.

What to do Next:

Keep dead wood trimmed out. Cuttings can be taken later on to raise more plants for the following year.