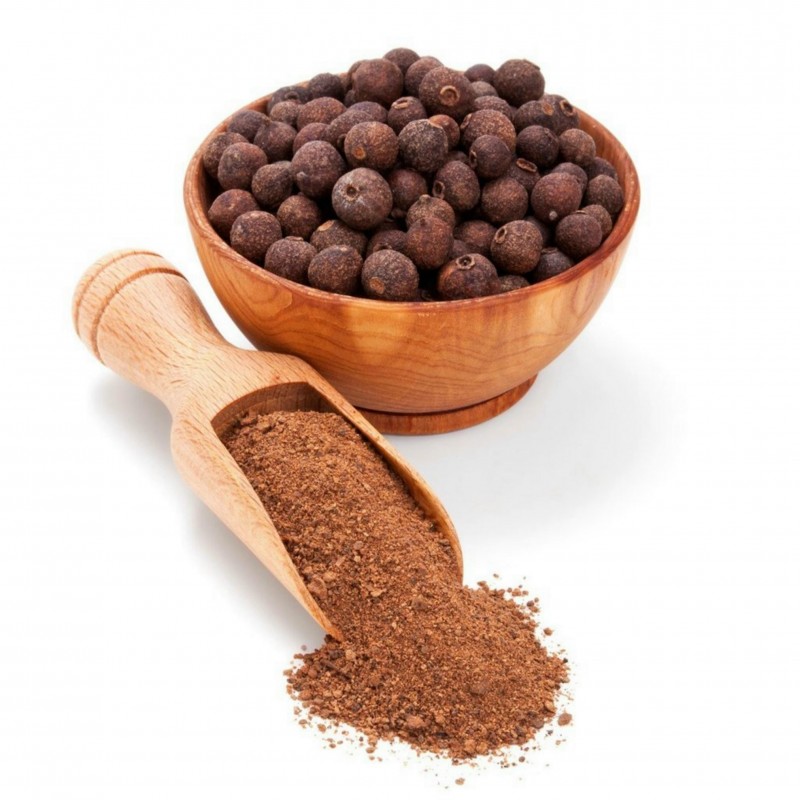 Allspice, also called Jamaica pepper, pepper, myrtle pepper, pimenta, pimento, English pepper or newspice, is the dried unripe fruit ("berries", used as a spice) of Pimenta dioica, a midcanopy tree native to the Greater Antilles, southern Mexico, and Central America, now cultivated in many warm parts of the world. The name 'allspice' was coined as early as 1621 by the English, who thought it combined the flavour of cinnamon, nutmeg, and cloves.

Allspice is the dried fruit of the P. dioica plant. The fruit are picked when green and unripe and are traditionally dried in the sun. When dry, they are brown and resemble large brown peppercorns. The whole fruit have a longer shelf life than the powdered product and produce a more aromatic product when freshly ground before use.

Fresh leaves are used where available. They are similar in texture to bay leaves and are thus infused during cooking and then removed before serving. Unlike bay leaves, they lose much flavour when dried and stored, so do not figure in commerce. The leaves and wood are often used for smoking meats where allspice is a local crop. Allspice can also be found in essential oil form.

Allspice is one of the most important ingredients of Caribbean cuisine. It is used in Caribbean jerk seasoning (the wood is used to smoke jerk in Jamaica, although the spice is a good substitute), in moles, and in pickling; it is also an ingredient in commercial sausage preparations and curry powders. Allspice is also indispensable in Middle Eastern cuisine, particularly in the Levant, where it is used to flavour a variety of stews and meat dishes. In Palestinian cuisine, for example, many main dishes call for allspice as the sole spice added for flavouring. In the U.S., it is used mostly in desserts, but it is also responsible for giving Cincinnati-style chili its distinctive aroma and flavour. Allspice is commonly used in Great Britain, and appears in many dishes, including cakes. Even in many countries where allspice is not very popular in the household, as in Germany, it is used in large amounts by commercial sausage makers. It is a main flavour used in barbecue sauces.[citation needed] In the West Indies, an allspice liqueur called "pimento dram" is produced.

Allspice has also been used as a deodorant. Volatile oils found in the plant contain eugenol, a weak antimicrobial agent.

The allspice tree, classified as an evergreen shrub, reaches heights between 10 and 18 m (32 and 60 ft). Allspice can be a small, scrubby tree, quite similar to the bay laurel in size and form. It can also be a tall, canopy tree, sometimes grown to provide shade for coffee trees planted underneath it. It can be grown outdoors in the tropics and subtropics with normal garden soil and watering. Smaller plants can be killed by frost, although larger plants are more tolerant. It adapts well to container culture and can be kept as a houseplant or in a greenhouse.

To protect the pimenta trade, the plant was guarded against export from Jamaica. Many attempts at growing the pimenta from seeds were reported, but all failed. At one time, the plant was thought to grow nowhere except in Jamaica, where the plant was readily spread by birds. Experiments were then performed using the constituents of bird droppings; however, these were also totally unsuccessful. Eventually, passage through the avian gut, either the acidity or the elevated temperature, was found to be essential for germinating the seeds. Today, pimenta is spread by birds in Tonga and Hawaii, where it has become naturalized on Kauaʻi and Maui.

Allspice (P. dioica) was encountered by Christopher Columbus on the island of Jamaica during his second voyage to the New World, and named by Dr. Diego Álvarez Chanca. It was introduced into European and Mediterranean cuisines in the 16th century. It continued to be grown primarily in Jamaica, though a few other Central American countries produced allspice in comparatively small quantities.

Note: when you receive the package carefully break the membrane, and remove the seeds from it. In each berry there are two seeds. See picture number 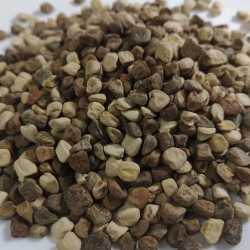 Běžná cena 2,15 € -23% Cena 1,66 € (SKU: P 447 S (6,5g))
Offer ends in:
Seeds Gallery Shop,
5/ 5
<!DOCTYPE html> <html> <head> <meta http-equiv="Content-Type" content="text/html; charset=UTF-8" /> </head> <body> <h2><strong>Barevné indické Hrách Osiva (Lathyrus sativus)</strong></h2> <h2><span style="color: #ff0000;"><strong>Cena za balení 6,5 g (30) semen.</strong></span></h2> <p>Lathyrus sativus, also known as grass pea, blue sweet pea, chickling pea, chickling vetch, Indian pea, white pea and white vetch, is a legume (family Fabaceae) commonly grown for human consumption and livestock feed in Asia and East Africa.[4] It is a particularly important crop in areas that are prone to drought and famine, and is thought of as an 'insurance crop' as it produces reliable yields when all other crops fail. The seeds contain a neurotoxin that causes a neurodegenerative disease when the seeds are consumed as a primary protein source for a prolonged period.</p> <h3><strong>Cultivation</strong></h3> <p>Lathyrus sativus grows best where the average temperature is 10–25 °C and average rainfall is 400–650 mm (16–26 in) per year. Like other legumes, it improves the nitrogen content of soil. The crop can survive drought or floods,[3] but grows best in moist soils. It tolerates a range of soil types from light sandy through loamy to heavy clay, and acid, neutral, or alkaline soils. It does not tolerate shade.</p> <h3><strong>Uses</strong></h3> <p>Seed is sold for human consumption at markets in Florence. Consumption of this pulse in Italy is limited to some areas in the central part of the country, and is steadily declining.</p> <p>Flour made from grass peas (Spanish: almorta) is the main ingredient for the gachas manchegas or gachas de almorta.[6] Accompaniments for the dish vary throughout La Mancha. This is an ancient Manchego cuisine staple, generally consumed during the cold winter months. The dish is generally eaten directly out of the pan in which it was cooked, using either a spoon or a simple slice of bread. This dish is commonly consumed immediately after removing it from the fire, being careful not to burn one's lips or tongue.</p> <p>Due to its toxicity, it is forbidden in Spain since 1967 for human consumption. It can be sold as animal feed but it cannot be displayed near other flours valid for human consumption (BOE-2484/1967. September 21st. Paragraphs 3.18.09 a and b and 5.36.16 b)</p> <p>Grass pea flour is exceedingly difficult to obtain outside of Castilla-La Mancha, especially in its pure form. Commercially available almorta flour is mixed with wheat flour because grass peas are toxic if consumed in significantly large quantities for prolonged periods of time.</p> <p>The town of Alvaiázere in Portugal dedicates a festival lasting several days to dishes featuring the pulse. Alvaiázere calls itself the capital of Chícharo, the name of this pulse in Portuguese.</p> <p>Immature seeds can be eaten like green peas. L. sativus needs soaking and thorough cooking to reduce toxins.</p> <p>The leaves and stem are cooked and eaten as chana saga (Odia: ଚଣା ଶାଗ) in parts of Odisha, India.</p> <p><strong>Seed ODAP characteristics</strong></p> <p>Like other grain legumes, L. sativus produces a high-protein seed. The seeds also contain variable amounts of a neurotoxic amino acid β-N-oxalyl-L-α,β-diaminopropionic acid (ODAP).[7][8] ODAP is considered the cause of the disease neurolathyrism, a neurodegenerative disease that causes paralysis of the lower body: emaciation of gluteal muscle (buttocks).[3] The disease has been seen to occur after famines in Europe (France, Spain, Germany), North Africa, and South Asia, and is still prevalent in Eritrea, Ethiopia, and Afghanistan (panhandle) when Lathyrus seed is the exclusive or main source of nutrients for extended periods. ODAP concentration increases in plants grown under stressful conditions, compounding the problem.</p> <p>The crop is harmless to humans in small quantities, but eating it as a major part of the diet over a three-month period can cause permanent paralysis below the knees in adults and brain damage in children, a disorder known as lathyrism.</p> </body> </html>
P 447 S (6,5g) 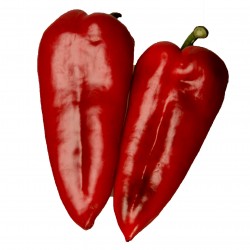