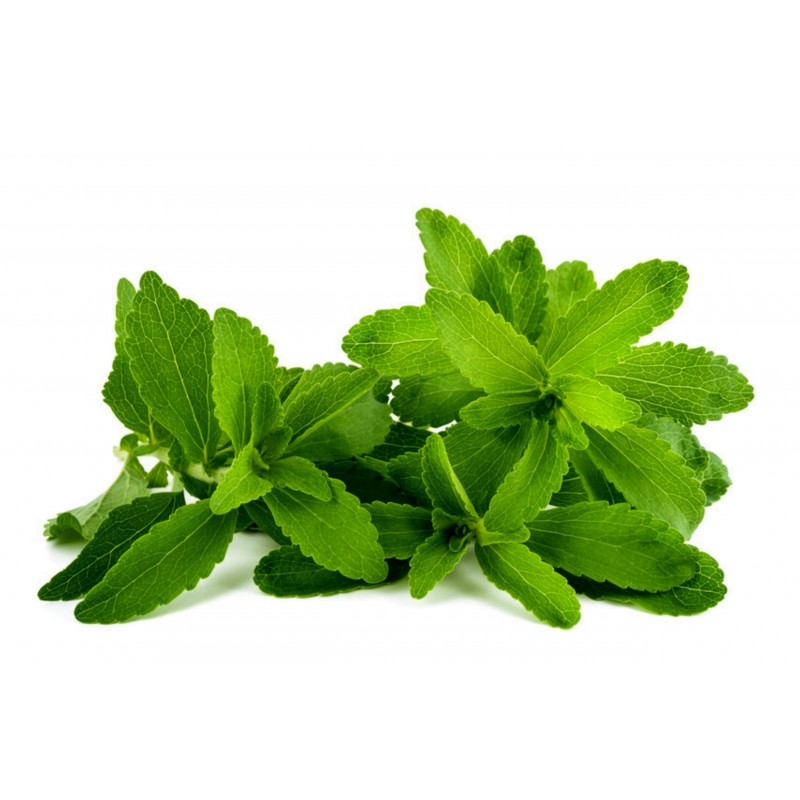 Stevia is a genus of about 240 species of herbs and shrubs in the sunflower family (Asteraceae), native to subtropical and tropical regions from western North America to South America. The species Stevia

Stevia is a genus of about 240 species of herbs and shrubs in the sunflower family (Asteraceae), native to subtropical and tropical regions from western North America to South America. The species Stevia rebaudiana, commonly known as sweetleaf, sweet leaf, sugarleaf, or simply stevia, is widely grown for its sweet leaves. As a sweetener and sugar substitute, stevia's taste has a slower onset and longer duration than that of sugar, although some of its extracts may have a bitter or licorice-like aftertaste at high concentrations.
With its steviol glycoside extracts having up to 300 times the sweetness of sugar, stevia has garnered attention with the rise in demand for low-carbohydrate, low-sugar food alternatives. Because stevia has a negligible effect on blood glucose, it is attractive as a natural sweetener to people on carbohydrate-controlled diets.
The availability of stevia varies from country to country. In a few countries, it has been available as a sweetener for decades or centuries; for example, stevia is widely used as a sweetener in Japan where it has been available for decades. In some countries health concerns and political controversies have limited its availability; for example, the United States banned stevia in the early 1990s unless labeled as a dietary supplement,[1][2] but in 2008 approved rebaudioside A extract as a food additive. Over the years, the number of countries in which stevia is available as a sweetener has been increasing. In 2011, stevia was approved for use in the EU starting in early December, 2011.

The genus Stevia consists of 240[5] species of plants native to South America, Central America, and Mexico, with several species found as far north as Arizona, New Mexico, and Texas.[6] They were first researched by Spanish botanist and physician Petrus Jacobus Stevus (Pedro Jaime Esteve),[7] from whose surname originates the Latinized word stevia.[8] Human use of the sweet species S. rebaudiana originated in South America. The leaves of the stevia plant have 30–45 times the sweetness of sucrose (ordinary table sugar).[9] The leaves can be eaten fresh, or put in teas and foods.
The plant was used extensively by the Guaraní people for more than 1,500 years, and the plant has a long history of medicinal use in Paraguay and Brazil.[10] The leaves have been traditionally used for hundreds of years in Paraguay and Brazil to sweeten local teas, medicines and as a "sweet treat".[10]
Steviol is the basic building block of stevia's sweet glycosides.

In 1899, the Swiss botanist Moisés Santiago Bertoni, during his research in eastern Paraguay first described the plant and the sweet taste in detail.[11] Only limited research was conducted on the topic until, in 1931, two French chemists isolated the glycosides that give stevia its sweet taste.[12] These compounds were named stevioside and rebaudioside, and are 250–300 times as sweet as sucrose, heat stable, pH stable, and non-fermentable.

The exact structure of the aglycone and the glycoside were published in 1955.
In the early 1970s, Japan began cultivating stevia as an alternative to artificial sweeteners such as cyclamate and saccharin, which were suspected carcinogens. The plant's leaves, the aqueous extract of the leaves, and purified steviosides are used as sweeteners. Since the Japanese firm Morita Kagaku Kogyo Co., Ltd. produced the first commercial stevia sweetener in Japan in 1971,[14] the Japanese have been using stevia in food products, soft drinks (including Coca Cola),[15] and for table use. Japan currently consumes more stevia than any other country, with stevia accounting for 40% of the sweetener market.[16]

Today, stevia is cultivated and used in food elsewhere in east Asia, including in China (since 1984), Korea, Taiwan, Thailand, and Malaysia. It can also be found in Saint Kitts and Nevis, in parts of South America (Brazil, Colombia, Peru, Paraguay, and Uruguay), and in Israel. China is the world's largest exporter of stevioside.

Stevia species are found in the wild in semiarid habitats ranging from grassland to mountain terrain. They do produce seeds, but only a small percentage of them germinate. Planting cloned stevia is a more effective method of reproduction.

For centuries, the Guaraní peoples of Paraguay used stevia, which they called ka'a he'ê ("sweet herb"), as a sweetener in yerba mate and cardiotonic medicinal teas.[17] Current research has evaluated its effects on obesity[18] and hypertension.[19][20] Stevia has a negligible effect on blood glucose, and may even enhance glucose tolerance;[21] it may be useful as a natural sweetener for diabetics and others on carbohydrate-controlled diets.
MHS 12
6882 Przedmioty