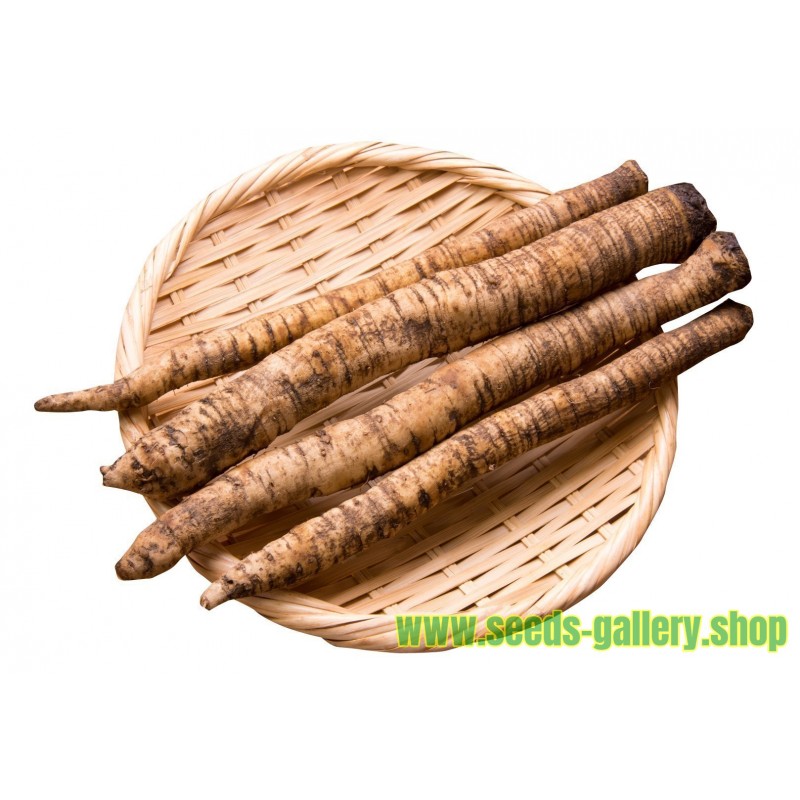 Price for a Package of 10 seeds.

Burdock is native to temperate Europe and Asia and a most popular variety root vegetable in Japan. "Takinogawa" is a special, late-variety burdock that is rich in flavour. This important Japanese vegetable is essential to many classic Japanese dishes including "kimpira," made with sautéed

Price for a Package of 10 seeds.

Burdock is native to temperate Europe and Asia and a most popular variety root vegetable in Japan. “Takinogawa” is a special, late-variety burdock that is rich in flavour. This important Japanese vegetable is essential to many classic Japanese dishes including "kimpira," made with sautéed burdock and carrots. The tap root can be as long as a metre long (36in), they have a texture similar to parsnips and when cooked quickly, retain their crispiness; the outer skin is very thin, similar to carrots.

In England, Burdock is best known as an ingredient in the beverage Dandelion and Burdock, the English equivalent of American root beer. The key flavour profile is anise, perhaps a touch of ginger and spice, but generally a feel of summer, hedgerows and fun!

Burdock is a biennial, producing a rosette of leaves in the first year, then completing its life cycle by flowering and seeding in the second year. Mature plant can reach 3 feet in height. It is easily grown from seed it prefers a deep and sandy garden soil in partial shade or full sun. It may be sown directly from early spring on into summer, with plenty of time left to get a good harvest of roots.

Burdock is the hardiest root vegetable and winters in the garden easily for spring digging. Work the soil deeply for best crop and cook like carrots. Seeds can be sprouted like bean sprouts; nothing goes to waste with this plant.

Sowing: Sow from early spring on into summer
Soak seeds for 2 to 4 hours in warm water then sow the burdock seeds about 7mm (¼ in) deep and pat down the row. Burdock seeds germinate in 1 to 2 weeks. Keep weeded and thin to about 10cm (4in) apart. The plant prefers regular watering. The reason for keeping the plants so close together is that it makes the roots grow long and thin, which is desirable, and it lessens the labour involved in digging, as more roots are dug out of a smaller space.

Harvesting Burdock:
Moderate harvest of the leaves throughout the season will not deter root development. The burdock roots are ready to harvest after two to four months. You don’t have to wait until the tops are dormant, but of course to obtain the largest possible roots (which can weigh up to two pounds), then harvest after the tops die back in the autumn.

Digging the roots can be difficult, unless the soil is a deep sandy loam. The best technique is to trench down the side of the row with a spade, then push the spade in behind the roots and lever them into the trench, being careful not to break them. Also be careful not to break the spade. (This is the part where you are glad you planted them closely together.) Dig and wash the roots and then split them down the length. A large root should be split into at least 4 pieces. Dry the burdock root pieces on screens in a dark, airy location or use a vegetable/fruit dehydrator. When the pieces snap and are internally dry, they may be ground up to make a tincture or stored in plastic bags or glass jars for later use.

Culinary Uses:
Very young roots can be eaten raw, but older roots are usually cooked. Cut root into slivers and stir-fry. Young leaves and stalks are eaten raw or cooked. Seeds can be sprouted like bean sprouts; nothing goes to waste with this plant.

Medicinal Uses:
Fresh burdock root or the tincture of dried root is taken internally as a treatment for skin complaints. Often combined with dandelion or yellow dock, burdock root is an effective blood purifier used to treat psoriasis, eczema, oily skin, acne, boils, and gout. The leaf may be picked as needed for tea as soon as it reaches sufficient size. For more information on the use of burdock root in home herbal medicine, see the book “Making Plant Medicine.” by Richard A. Cech ISBN: 9780970031204

Arctium is a genus of biennial plants commonly known as burdock, family Asteraceae.[3] Native to the Old World, several species have been widely introduced worldwide.

Plants of the genus Arctium have dark green leaves that can grow up to 28" (71 cm) long. They are generally large, coarse and ovate, with the lower ones being heart-shaped. They are woolly underneath. The leafstalks are generally hollow. Arctium species generally flower from July through to October.

The prickly heads of these plants (burrs) are noted for easily catching on to fur and clothing (being the inspiration for Velcro®[5]), thus providing an excellent mechanism for seed dispersal.[4] Burrs cause local irritation and can possibly cause intestinal hairballs in pets. However, most animals avoid ingesting these plants.

Birds are especially prone to becoming entangled with their feathers in the burrs leading to a slow death, as they are unable to free themselves.

A large number of species have been placed in genus Arctium at one time or another, but most of them are now classified in the related genus Cousinia. The precise limits between Arctium and Cousinia are hard to define; there is an exact correlation between their molecular phylogeny. The burdocks are sometimes confused with the cockleburs (genus Xanthium) and rhubarb (genus Rheum).

The roots of burdock, among other plants, are eaten by the larva of the Ghost Moth (Hepialus humuli). The plant is used as a food plant by other Lepidoptera including Brown-tail, Coleophora paripennella, Coleophora peribenanderi, the Gothic, Lime-speck Pug and Scalloped Hazel.

The green, above-ground portions may cause contact dermatitis in humans due to the lactones the plant produces.

The taproot of young burdock plants can be harvested and eaten as a root vegetable. While generally out of favour in modern European cuisine, it remains popular in Asia. Arctium lappa is called (牛蒡), pronounced "gobō" (ごぼう) in Japanese or "niúbàng" in Chinese, in Korea burdock root is called "u-eong" (우엉) and sold as "tong u-eong" (통우엉), or "whole burdock". Plants are cultivated for their slender roots, which can grow about one metre long and two centimetres across. Burdock root is very crisp and has a sweet, mild, and pungent flavour with a little muddy harshness that can be reduced by soaking julienned or shredded roots in water for five to ten minutes.

Immature flower stalks may also be harvested in late spring, before flowers appear; their taste resembles that of artichoke, to which the burdock is related. The stalks are thoroughly peeled, and either eaten raw, or boiled in salt water.[7] Leaves are also eaten in spring in Japan when a plant is young and leaves are soft. Some A. lappa cultivars are specialized for this purpose. A popular Japanese dish is kinpira gobō (金平牛蒡), julienned or shredded burdock root and carrot, braised with soy sauce, sugar, mirin and/or sake, and sesame oil. Another is burdock makizushi (sushi filled with pickled burdock root; the burdock root is often artificially coloured orange to resemble a carrot).

In the second half of the 20th century, burdock achieved international recognition for its culinary use due to the increasing popularity of the macrobiotic diet, which advocates its consumption. It contains a fair amount of dietary fiber (GDF, 6g per 100g), calcium, potassium, amino acids,[8] and is low in calories. It contains a polyphenol oxidase,[9] which causes its darkened surface and muddy harshness by forming tannin-iron complexes. Burdock root's harshness harmonizes well with pork in miso soup (tonjiru) and with Japanese-style pilaf (takikomi gohan).

Dandelion and burdock is today a soft drink that has long been popular in the United Kingdom, which has its origins in hedgerow mead commonly drunk in the mediæval period.[10] Burdock is believed to be a galactagogue, a substance that increases lactation, but it is sometimes recommended to be avoided during pregnancy based on animal studies that show components of burdock to cause uterus stimulation.

In Europe, burdock root was used as a bittering agent in beer before the widespread adoption of hops for this purpose.

Folk herbalists considered dried burdock to be a diuretic, diaphoretic, and a blood purifying agent[citation needed]. The seeds of A. lappa are used in traditional Chinese medicine,[citation needed] under the name niubangzi (Chinese: 牛蒡子; pinyin: niúbángzi; Some dictionaries list the Chinese as just 牛蒡 niúbàng.)

Burdock is a traditional medicinal herb that is used for many ailments. Burdock root oil extract, also called Bur oil, is currently used in Europe in the belief that it is a useful scalp treatment.[citation needed] Modern studies indicate that burdock root oil extract is rich in phytosterols and essential fatty acids (including rare long-chain EFAs).

After taking his dog for a walk one day in the early 1940s, George de Mestral, a Swiss inventor, became curious about the seeds of the burdock plant that had attached themselves to his clothes and to the dog's fur. Under a microscope, he looked closely at the hook system that the seeds use to hitchhike on passing animals aiding seed dispersal, and he realized that the same approach could be used to join other things together. The result of his studies was Velcro.