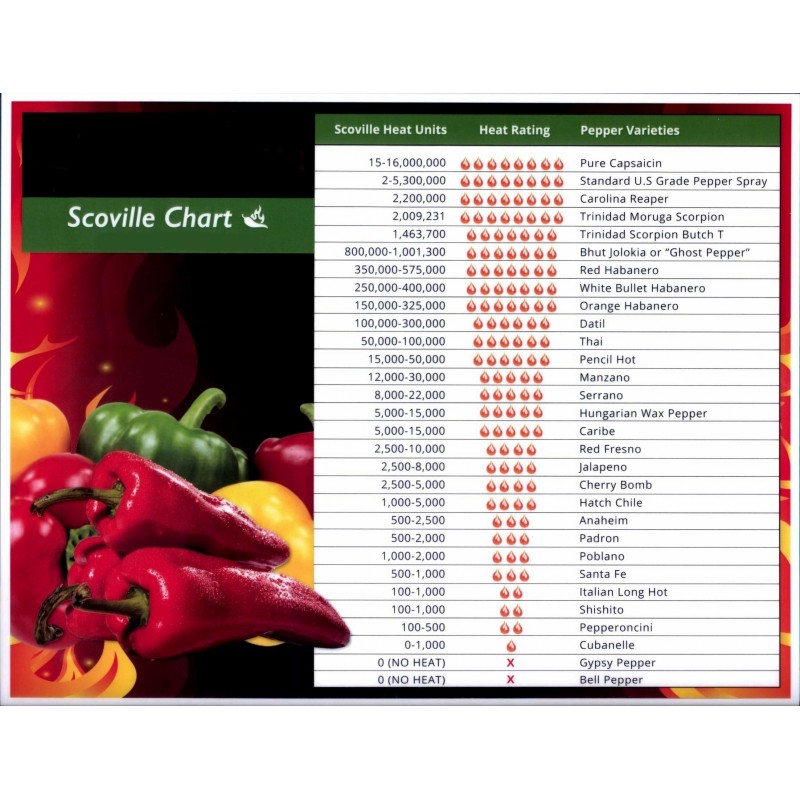 The Scoville scale is a measurement of the pungency (spiciness or "heat") of chili peppers and other spicy foods, as recorded in Scoville Heat Units (SHU) based on the concentration of capsaicinoids, among which capsaicin is the predominant component.

The Scoville scale is a measurement of the pungency (spiciness or "heat") of chili peppers and other spicy foods, as recorded in Scoville Heat Units (SHU) based on the concentration of capsaicinoids, among which capsaicin is the predominant component. The scale is named after its creator, American pharmacist Wilbur Scoville, whose 1912 method is known as the Scoville organoleptic test. The Scoville organoleptic test is the most practical method for estimating SHU and is a subjective assessment derived from the capsaicinoid sensitivity by people experienced with eating hot chilis.

An alternative method, using high-performance liquid chromatography (HPLC) can be used to analytically quantify the capsaicinoid content as an indicator of pungency. As of 2011, the subjective organoleptic test has been largely superceded by analytical methods such as chromatography.

In the Scoville organoleptic test, an exact weight of dried pepper is dissolved in alcohol to extract the heat components (capsaicinoids), then diluted in a solution of sugar water.[3][10][11] Decreasing concentrations of the extracted capsaicinoids are given to a panel of five trained tasters, until a majority (at least three) can no longer detect the heat in a dilution.[1][3][10][11] The heat level is based on this dilution, rated in multiples of 100 SHU.[10]

Another source using subjective assessment stated: "Conventional methods used in determining the level of pungency or capsaicin concentration are using a panel of tasters (Scoville Organoleptic test method). ... Pepper pungency is measured in Scoville Heat Units (SHU). This measurement is the highest dilution of a chili pepper extract at which heat can be detected by a taste panel."[4][12]

A weakness of the Scoville organoleptic test is its imprecision due to human subjectivity, depending on the taster's palate and number of mouth heat receptors, which vary widely among people.[1][4] Another weakness is sensory fatigue;[1] the palate is quickly desensitized to capsaicinoids after tasting a few samples within a short time period.[10] Results vary widely (up to ± 50%) between laboratories.[11] 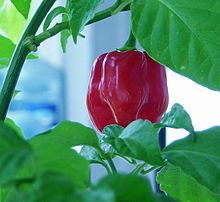 Since the 1980s, spice heat has been assessed quantitatively by high-performance liquid chromatography (HPLC), which measures the concentration of heat-producing capsaicinoids, typically with capsaicin content as the main measure.[4][5] As stated in one review: "the most reliable, rapid, and efficient method to identify and quantify capsaicinoids is HPLC; the results of which can be converted to Scoville Heat Units by multiplying the parts-per-million by 16."[4] HPLC results permit the measurement of a substance’s capsaicin capacity to produce perceived heat ("pungency"). This method gives results in American Spice Trade Association "pungency units", which are defined as one part capsaicin per million parts dried pepper mass.[5]

Peak areas are calculated from HPLC traces of dry samples of the substance to be tested in 1 ml of acetonitrile. The standard used to calibrate the calculation is 1 gram of capsaicin. Scoville heat units are found by multiplying the ppmH value by a factor of 15 or 16.

The levels of pungency, in terms of Scoville units are:

Since Scoville ratings are defined per unit of dry mass, comparison of ratings between products having different water content can be misleading. For example, typical fresh chili peppers have a water content around 90%, whereas Tabasco sauce has a water content of 95%.[15] For law-enforcement-grade pepper spray, values from 500,000 up to 5 million SHU have been reported,[1][16] but the actual strength of the spray depends on the dilution.

Numerical results for any specimen vary depending on its cultivation conditions and the uncertainty of the laboratory methods used to assess the capsaicinoid content.[4] Pungency values for any pepper are variable, owing to expected variation within a species, possibly by a factor of 10 or more, depending on seed lineage, climate and humidity, and soil composition supplying nutrients. The inaccuracies described in the measurement methods also contribute to the imprecision of these values.[4][11]

Capsicum chili peppers are commonly used to add pungency in cuisines worldwide.[3][4] The range of pepper heat reflected by a Scoville score is from 100 or less (sweet peppers) to over 3 million (Pepper X) (table below; Scoville scales for individual chili peppers are in the respective linked article). 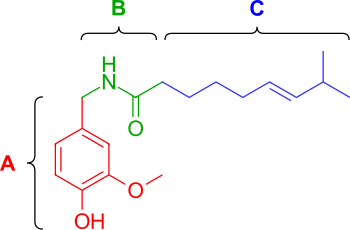 The class of compounds causing pungency in plants like chili peppers is called capsaicinoids, which display a linear correlation between concentration and Scoville scale, and may vary in content during ripening.[22] Capsaicin is the major capsaicinoid in chili peppers.[5]