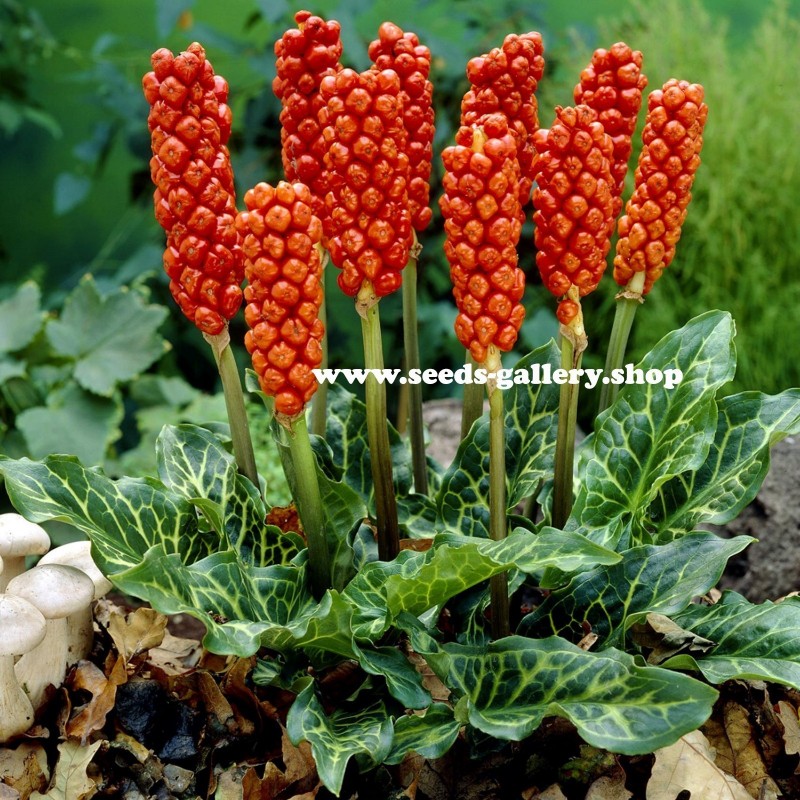 Arum maculatum is a common woodland plant species of the family Araceae. It is widespread across most of Europe, as well as Turkey and the Caucasus. It is known by an abundance of common

Arum maculatum is a common woodland plant species of the family Araceae. It is widespread across most of Europe, as well as Turkey and the Caucasus. It is known by an abundance of common names including snakeshead, adder's root, arum, wild arum, arum lily, lords-and-ladies, devils and angels, cows and bulls, cuckoo-pint, soldiers diddies, priest's pintle, Adam and Eve, bobbins, naked girls, naked boys, starch-root, wake robin, friar's cowl, sonsie-give-us-your-hand, jack in the pulpit and cheese and toast. The name "lords-and-ladies" and other gender-related names refer to the plant's likeness to male and female genitalia symbolising copulation.

The purple-spotted leaves of A. maculatum appear in the spring (April–May) followed by the flowers borne on a poker-shaped inflorescence called a spadix, which is partially enclosed in a pale green spathe or leaf-like hood. The flowers are hidden from sight, clustered at the base of the spadix with a ring of female flowers at the bottom and a ring of male flowers above them.

Above the male flowers is a ring of hairs forming an insect trap. Insects, especially owl-midges Psychoda phalaenoides,[6] are attracted to the spadix by its faecal odour and a temperature up to 15 °C warmer than the ambient temperature.[7] The insects are trapped beneath the ring of hairs and are dusted with pollen by the male flowers before escaping and carrying the pollen to the spadices of other plants, where they pollinate the female flowers. The spadix may also be yellow, but purple is the more common.

In autumn, the lower ring of (female) flowers forms a cluster of bright red berries which remain after the spathe and other leaves have withered away. These attractive red to orange berries are extremely poisonous. The berries contain oxalates of saponins which have needle-shaped crystals which irritate the skin, mouth, tongue, and throat, and result in swelling of throat, difficulty breathing, burning pain, and upset stomach. However, their acrid taste, coupled with the almost immediate tingling sensation in the mouth when consumed, means that large amounts are rarely taken and serious harm is unusual. It is one of the most common causes of accidental plant poisoning based on attendance at hospital emergency departments.

The root-tuber may be very big and is used to store starch. In mature specimens, the tuber may be as much as 400 mm below ground level.

All parts of the plant can produce allergic reactions in many people and the plant should be handled with care. Many small rodents appear to find the spadix particularly attractive; finding examples of the plant with much of the spadix eaten away is common. The spadix produces heat and probably scent as the flowers mature, and this may attract the rodents.

Arum maculatum is also known as cuckoo pint or cuckoo-pint in the British Isles and is named thus in Nicholas Culpepers' famous 17th-century herbal. This is a name it shares with Arum italicum (Italian lords-and-ladies) - the other native British Arum. "Pint" is a shortening of the word "pintle", meaning penis, derived from the shape of the spadix. The euphemistic shortening has been traced to Turner in 1551.[9]

As a seedling the plant has small light green leaves that are not glossy like the mature leaves. At about 5 months its leaves grow larger and glossier. At 1 year old all of the leaves become glossy and die back. The next year the plant flowers during summer.

It grows in woodland areas and riversides. It can occasionally grow as a weed in partly shaded spots.

The root of the cuckoo-pint, when roasted well, is edible and when ground was once traded under the name of Portland sago. It was used like salep (orchid flour) to make saloop — a drink popular before the introduction of tea or coffee. It was also used as a substitute for arrowroot. If prepared incorrectly, it can be highly toxic, so should be prepared with due diligence and caution.

Arum maculatum is cultivated as an ornamental plant in traditional and woodland shade gardens. The cluster of bright red berries standing alone without foliage can be a striking landscape accent. The mottled and variegated leaf patterns can add bright interest in darker habitats.

In 1440, the nuns of Syon Abbey in England used the roots of the cuckoo-pint flower to make starch for altar cloths and other church linens. In fact, communion linen could only be made in this way.