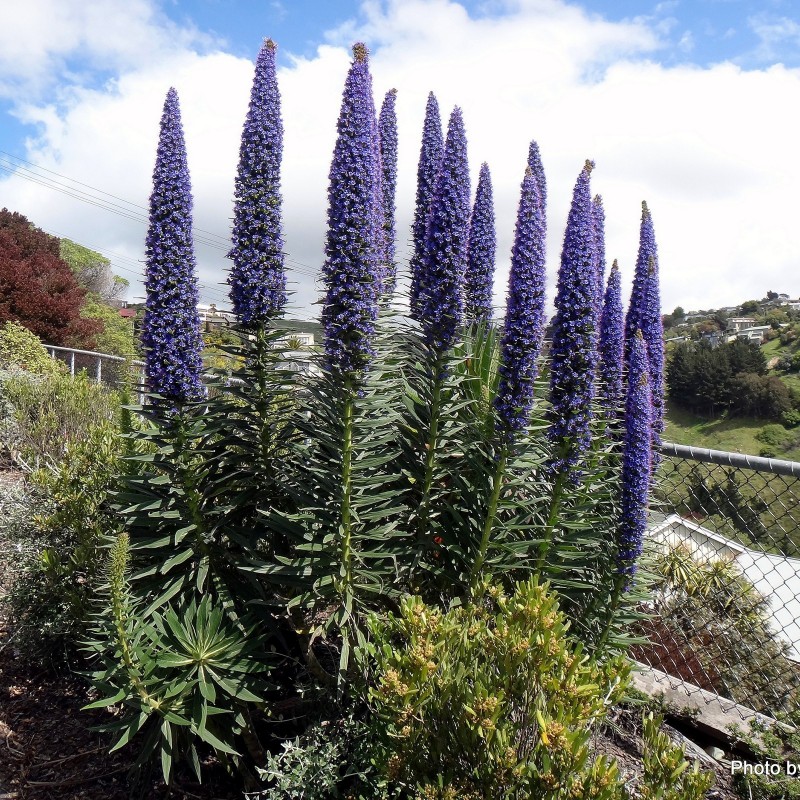 Echium pininana, the tree echium, pine echium, or giant viper's-bugloss, is a species of flowering plant in the borage family Boraginaceae. It is endemic to the Canary Islands, where it is restricted to the island of La Palma. It is cultivated in gardens of Britain and Ireland, and it has naturalized along the northern California coast in San Mateo and Mendocino Counties. Its native habitat is laurel forests, where it is now endangered through habitat loss.

It is a biennial or triennial, showing little more than a leaf in the first year, but subsequently producing a dense, 4 meters (13 ft) high (potentially) flower spike that carries a dense mass of leaves and small blue flowers.

The plant is recommended for the southern maritime counties of England, the Channel Islands, and the Scilly Isles. There are, however, reports of successful cultivation in the English Midlands and Yorkshire, albeit in favorable locations. Specimens are also grown in Dublin gardens and in the Irish National Botanic Gardens at Glasnevin. The plant also grows readily in North Wales where it seeds very widely. Although E. pininana is half-hardy in Britain and Ireland, it will self-seed to form clusters of plants, and it is suggested that by natural selection a hardier variety will emerge.[4] The plant is most vulnerable to frosts in its first year. Because of its large leaves when partly grown, it is also very susceptible to wind damage. Hence a sheltered garden position is essential.

Echiums can be raised from seed but most will take 2-3 years to flower. The best time to sow is April-June and seed should be only lightly covered, preferably with vermiculite, and not over watered. In the wild the conditions are hot days/cool nights and constant heat could cause them to fail, so move into a cool position at night. Echium produce lots of seed, especially the monocarpic species, and in a mild winter they may germinate in the ground.

If you collect your own seed be aware that the fruit is in the form of a nutlet containing four individual seeds, and it is advisable not to separate them as this could cause damage. Also, be
aware that cross-pollination may produce variations in color.