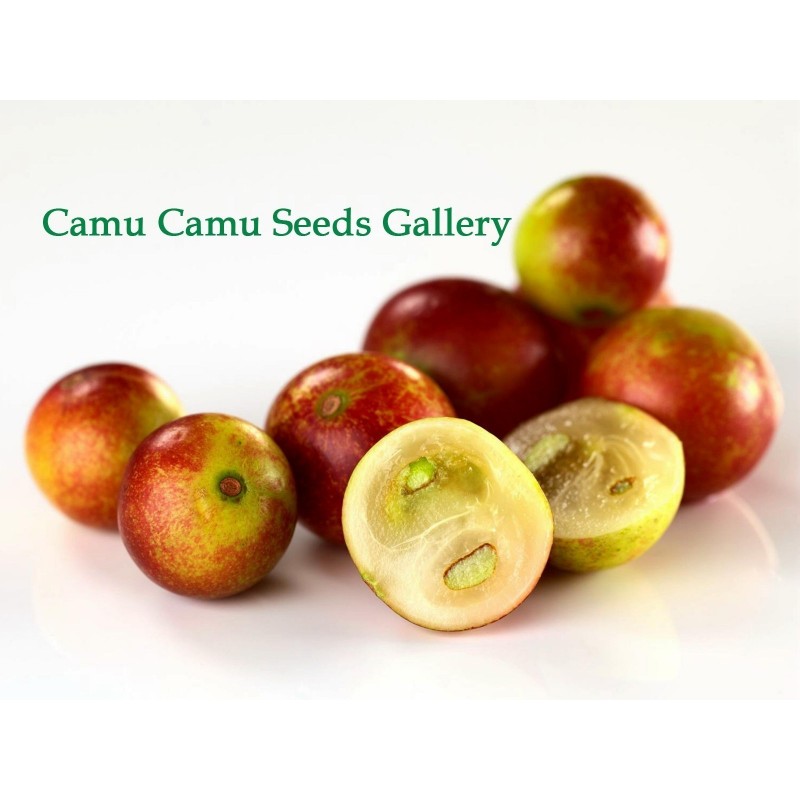 Myrciaria dubia, commonly known as camu camu, camucamu, cacari, or camocamo, is a small bushy riverside tree from the Amazon rainforest in Peru and Brazil,

Myrciaria dubia, commonly known as camu camu, camucamu, cacari, or camocamo, is a small bushy riverside tree from the Amazon rainforest in Peru and Brazil, which grows to a height of 3–5 m (9.8–16.4 ft) and bears a red/purple cherry-like fruit. It is a close relative of the jabuticaba (Myrciaria cauliflora) and the guavaberry or rumberry (Myrciaria floribunda). The high vitamin C content, on the order of 2–3% of fresh weight, is the most important property of the fruit.

Camu camu has small flowers with waxy white petals and a sweet-smelling aroma. It has bushy, feathery foliage. The evergreen, opposite leaves are lanceolate to elliptic. Individual leaves are 3–20 cm (1.2–7.9 in)m in length and 1–2 cm (0.39–0.79 in) wide.

The current range of camu camu consists of the Amazonian lowlands of Colombia, Ecuador, Peru, Bolivia, and Brazil. Its distribution extends from the center of Pará state, Brazil, along the mid and upper Amazon River to the eastern part of Peru; in the north, it appears in the Casiquiare and the upper and middle Orinoco River. In Brazil, it is found in Rondônia along the Maçangana and Urupa Rivers and in Amazonas, in the municipalities of Manaus and Manacapuru and along the Javarí, Madeira, and Negro Rivers.

Long used by native peoples, wild camu camu fruit is harvested directly into canoes. The fruit has only recently come into large-scale cultivation and sale to the world market, with Japan being the major buyer. It is relatively easy to cultivate. It survives best in hot, damp, tropical climates, but will grow in the subtropics, surviving temperatures down to just above freezing. It requires copious water. Fair trade is present in low-land production from the Association of Camu Camu Producers of the Peruvian Amazon.

The tree occurs in locally dense populations or even monospecific stands in Amazonian flood plains and riparian vegetation. The plant is extremely tolerant of flooding, withstanding four to five months with the roots and even much of the aerial parts submerged in water. The species propagates through seeds. In cultivation, the tree begins bearing fruits after attaining 2 cm (0.79 in) in stem girth (three years after emergence of the seedling). Plants flower at the end of the dry season and fruit at the peak of the rainy season. Observations with both wild and cultivated plants suggest that the trees can remain productive for several decades.

Wild trees have been found to yield 12 kg (26 lb) of fruit on average. At suggested planting densities of 600–1100 trees per 1 ha (2.5 acres), about 12 t (12 long tons; 13 short tons) fruit can be derived in cultivation from one hectare. However, with improved horticultural techniques, such as the use of clonal elite material, pruning, and fertilization, much higher yields could be achieved.

Documentation of traditional camu camu uses is scarce. In traditional Amazonian societies, camu camu is not likely to have ever been nutritionally relevant. The fruit is extremely acidic and the flavor must be masked by dilution in milk/water and the addition of sugar.

Camu camu has an extraordinarily high vitamin C content (on the order of 2–3% of fresh weight, second only to the Australian native Terminalia ferdinandiana), and this property of the fruit has been exploited in positioning it on international markets. Vitamin C content declines as full maturity is reached, with a trade-off between vitamin C and flavor expression.

A reddish pigment in the leathery skin imparts a pink color on juices extracted from camu camu. The aroma is subtle, but is not as captivating as in more popular fruits. Camu camu is more recently also used in ice creams, sweets, etc.

Processed powder from the fruit pulp is beginning to be sold in the west as a health food in loose powder or capsule form.

It is rich in flavonoids, such as anthocyanins, flavonols and flavanols, catechins, delphinidin 3-glucoside, cyanidin 3-glucoside, ellagic acid, and rutin; other analysis revealed the presence of gallic and ellagic acids, suggesting that the fruit possesses hydrolyzed tannins (gallo- and/or ellagitannins).

Currently, overharvesting of wild camu camu threatens to make it an endangered species. Efforts are underway to encourage the commercial growing of camu camu in the Amazon River basin.