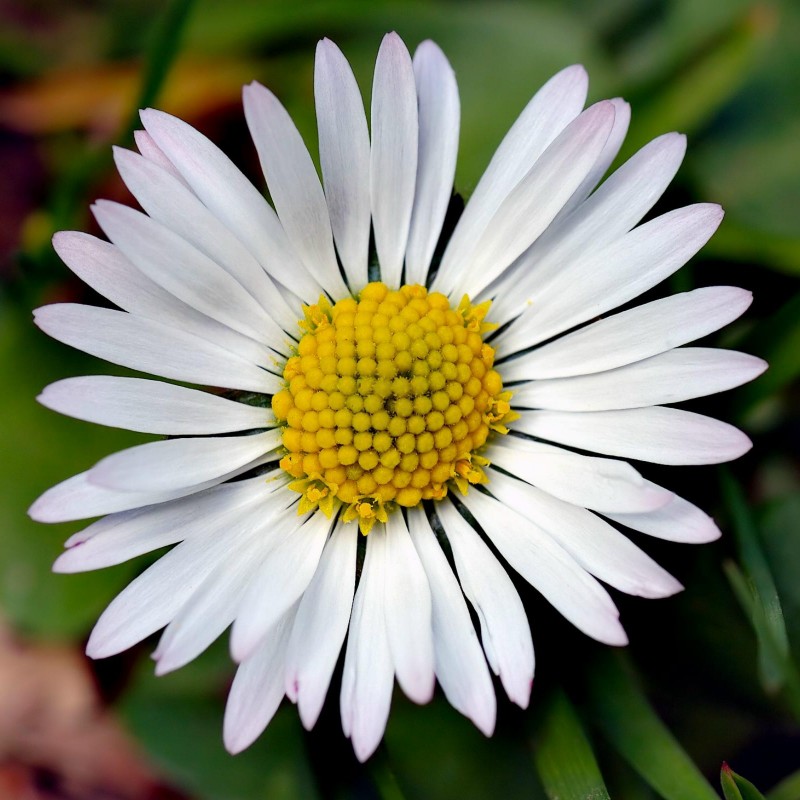 Bellis perennis is a common European species of daisy, of the Asteraceae family, often considered the archetypal species of that name. Many related plants also share the name "daisy", so to distinguish this species from other daisies

Bellis perennis is a common European species of daisy, of the Asteraceae family, often considered the archetypal species of that name. Many related plants also share the name "daisy", so to distinguish this species from other daisies it is sometimes qualified as common daisy, lawn daisy or English daisy. Historically, it has also been commonly known as bruisewort and occasionally woundwort (although the common name woundwort is now more closely associated with Stachys (woundworts)). Bellis perennis is native to western, central and northern Europe, but widely naturalized in most temperate regions including the Americas and Australasia.

It is an herbaceous perennial plant with short creeping rhizomes and rosettes of small rounded or spoon-shaped leaves that are from 3/4 to 2 inches (approx. 2–5 cm) long and grows flat to the ground. The species habitually colonizes lawns, and is difficult to eradicate by mowing - hence the term 'lawn daisy'. Wherever it appears it is often considered an invasive weed.[4]

The flowerheads are composite, in the form of a pseudanthium, consisting of many sessile flowers about 3/4 to 1-1/4 in (approx. 2–3 cm) in diameter, with white ray florets (often tipped red) and yellow disc florets. Each inflorescence is borne on single leafless stems 3/4 - 4 in (approx. 2–10 cm), rarely 6 in (approx. 15 cm) tall. The capitulum, or disc of florets, is surrounded by two rows of green bracts known as "phyllaries".

B. perennis generally blooms from early to midsummer, although when grown under ideal conditions, they have a very long flowering season and will even produce a few flowers in the middle of mild winters.

It can generally be grown in USDA Zones 4 - 8 (i.e. where minimum temperatures are above −30 °F (−34 °C)) in full sun to partial shade conditions, and requires low or no maintenance. It has no known serious insect or disease problems and can generally be grown in most well-drained soils. The plant may be propagated either by seed after the last frost, or by division after flowering.

Though invasive, the species is still considered a valuable ground cover in certain garden settings (e.g., as part of English or cottage-inspired gardens, as well as spring meadows where low growth and some color is desired in parallel with minimal care and maintenance while helping to crowd out noxious weeds once established and naturalized).

Numerous single- and double-flowered varieties are in cultivation, producing flat or spherical blooms in a range of sizes (1 cm to 6 cm) and colors (red, pink & white). They are generally grown from seed as biennial bedding plants. They can also be purchased as plugs in Spring. The cultivar 'Tasso series' has gained the Royal Horticultural Society's Award of Garden Merit.

The name "daisy" is considered a corruption of "day's eye", because the whole head closes at night and opens in the morning. Chaucer called it "eye of the day". In Medieval times, bellis perennis or the English Daisy was commonly known as "Mary's Rose".[10]

The English Daisy is also considered to be a flower of children and innocence.

Daisy is used as a girl's name and as a nickname for girls named Margaret, after the French name for the oxeye daisy, marguerite.

Bellis perennis has astringent properties and has been used in herbal medicine.[13] In ancient Rome, the surgeons who accompanied Roman legions into battle would order their slaves to pick sacks full of daisies in order to extract their juice, hence the origin of this plant's scientific name in Latin. Bandages were soaked in this juice and would then be used to bind sword and spear cuts.

Bellis perennis is still used in homeopathy for wounds and after certain surgical procedures, as well as for blunt trauma in animals. Typically, the plant is harvested while in flower when intended for use in homeopathy.

Bellis perennis flowers have been used in the traditional Austrian medicine internally as tea (or the leaves as a salad) for treatment of disorders of the gastrointestinal and respiratory tract.

Daisies have traditionally been used for making daisy chains in children's games.