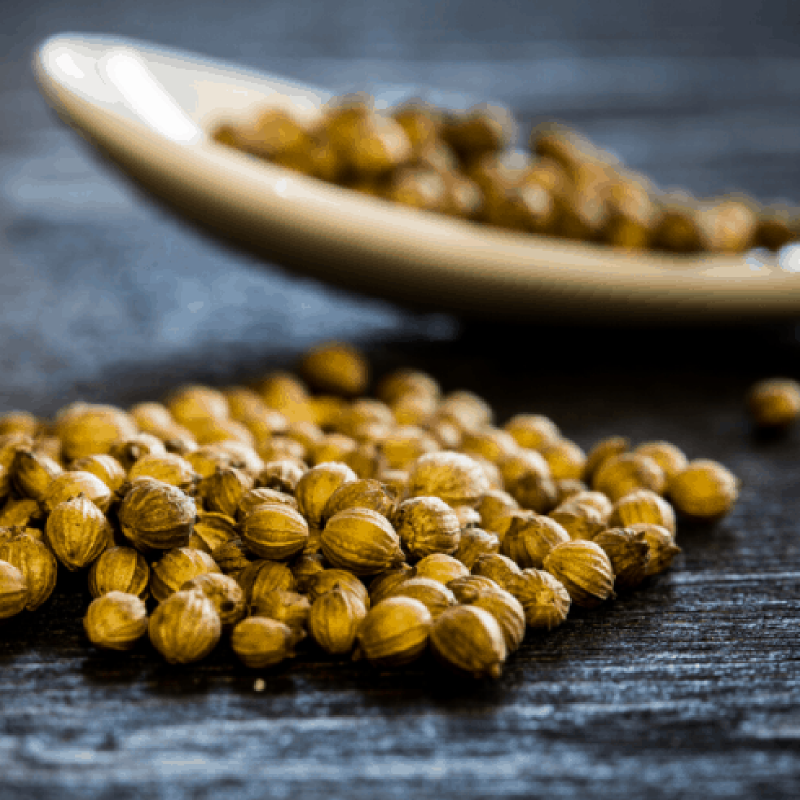 Coriander spice and medicine - whole fruit
The price is for packaging of 8 grams of this spice.

Coriander (Coriandrum sativum), also known as cilantro or Chinese parsley, is an annual herb in the family Apiaceae. All parts of the plant are edible, but the fresh leaves and the dried seeds are the

Coriander spice and medicine - whole fruit
The price is for packaging of 8 grams of this spice.

Coriander (Coriandrum sativum), also known as cilantro or Chinese parsley, is an annual herb in the family Apiaceae. All parts of the plant are edible, but the fresh leaves and the dried seeds are the parts most traditionally used in cooking.

Most people perceive the taste of coriander leaves as a tart, lemon/lime taste, but a smaller group, of about 4–14% of people tested, think the leaves taste like bath soap, as linked to a gene which detects aldehyde chemicals also present in soap.Raw coriander leaves are 92% water, 4% carbohydrates, 2% protein, and less than 1% fat(table). The nutritional profile of coriander seeds is different from the fresh stems or leaves. In a 100 gram reference amount, leaves are particularly rich in vitamin A, vitamin C and vitamin K, with moderate content of dietary minerals (table). Although seeds generally have lower content of vitamins, they do provide significant amounts of dietary fiber, calcium, selenium, iron, magnesium and manganese.

Coriander potentially may be confused with culantro (Eryngium foetidum L.), an Apiaceae like coriander (Coriandrum sativum L.), but from a different genus. Culantro has a distinctly different spiny appearance, a more potent volatile leaf oil and a stronger aroma.

The leaves have a different taste from the seeds, with citrus overtones.

The fresh leaves are an ingredient in many South Asian foods (such as chutneys and salads); in Chinese, Thai, and Burmese dishes; in Mexican cooking, particularly in salsa and guacamoleand as a garnish; and in salads in Russia and other CIS countries. In Portugal, chopped coriander is used in the bread soup Açorda, and in India, chopped coriander is a garnish on Indian dishes such as dal. As heat diminishes their flavour, coriander leaves are often used raw or added to the dish immediately before serving. In Indian and Central Asian recipes, coriander leaves are used in large amounts and cooked until the flavour diminishes. The leaves spoil quickly when removed from the plant, and lose their aroma when dried or frozen.

The variety C. s. vulgare has a fruit diameter of 3–5 mm (0.12–0.20 in), while var. C. s. microcarpum fruits have a diameter of 1.5–3 mm (0.06–0.12 in). Large-fruited types are grown mainly by tropical and subtropical countries, e.g. Morocco, India, and Australia, and contain a low volatile oil content (0.1-0.4%). They are used extensively for grinding and blending purposes in the spice trade. Types with smaller fruit are produced in temperate regions and usually have a volatile oil content around 0.4-1.8%, so are highly valued as a raw material for the preparation of essential oil.