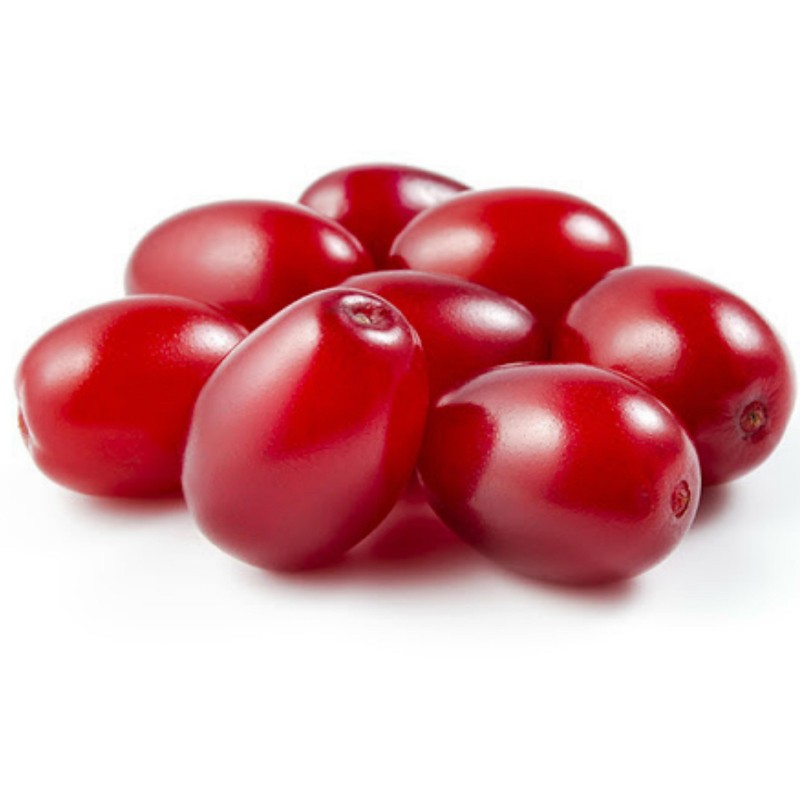 Cornus mas (Cornelian cherry, European cornel or Cornelian cherry dogwood) is a species of flowering plant in the dogwood family Cornaceae, native to southern Europe (from France to Ukraine) and south western Asia

It is a medium to a large deciduous shrub or small tree growing to 5–12 m tall, with dark brown branches and greenish twigs. The leaves are opposite, 4–10 cm long and 2–4 cm broad, with an ovate to oblong shape and an entire margin. The flowers are small (5–10 mm diameter), with four yellow petals, produced in clusters of 10–25 together in the late winter (between February and March in the UK),[1] well before the leaves appear. The fruit is an oblong red drupe 2 cm long and 1.5 cm in diameter, containing a single seed.

The fruits when ripe on the plant bear a resemblance to coffee berries, and ripen in mid- to late summer. The fruit is edible (mainly consumed in Eastern Europe, UK,[1] and Iran), but the unripe fruit is astringent. The fruit only fully ripens after it falls from the tree. When ripe, the fruit is dark ruby red or a bright yellow. It has an acidic flavor which is best described as a mixture of cranberry and sour cherry; it is mainly used for making jam, makes an excellent sauce similar to cranberry sauce when pitted and then boiled with sugar and orange, but also can be eaten dried. In Azerbaijan and Armenia, the fruit is used for distilling vodka, in Austria and German Alps is used for distilling Dirndlbrand, in Albania and Bosnia and Herzegovina it is distilled into raki, and in Greece crana berries are used to make a home-made liqueur. In Turkey and Iran it is eaten with salt as a snack in summer, and traditionally drunk in a cold drink called kızılcık şerbeti. Cultivars selected for fruit production in Ukraine have fruit up to four cm long. It is eaten in Eastern Europe in many ways including as a medicine. It is very high in vitamin C and is used to fight colds and flus.

The fruit of C. mas (together with the fruit of C. officinalis) has a long history of use in traditional Chinese medicine. Known as shan zhu yu, 山茱萸, it is used to retain the jing, essence, to tonify the kidneys, and in cases of spermatorrhea.

The species is also grown as an ornamental plant for its late winter yellow flowers, which open earlier than those of Forsythia. While Cornus mas flowers are not as large and vibrant as those of the Forsythia, the entire plant can be used for a similar effect in the landscape.

The wood of C. mas is extremely dense and, unlike the wood of most other woody plant species, sinks in water. This density makes it valuable for crafting into tool handles, parts for machines, etc. Cornus mas was used from the seventh century BC onward by Greek craftsmen to construct spears, javelins and bows, the craftsmen considering it far superior to any other wood. The wood's association with weaponry was so well known that the Greek name for it was used as a synonym for "spear" in poetry during the fourth and third centuries BC.[4] In Italy, the mazzarella, uncino or bastone, the stick carried by the butteri or mounted herdsmen of the Maremma region, is traditionally made of cornel-wood, there called crognolo or grugnale, dialect forms of Italian: corniolo.

Cornus mas, "male" cornel, was named so to distinguish it from the true dogberry, the "female" cornel, Cornus sanguinea, and so it appears in John Gerard's Herbal.[6] The shrub was not native to the British Isles. William Turner had only heard of the plant in 1548,[7] but by 1551 he had heard of one at Hampton Court Palace.[8] Gerard said it was to be found in the gardens "of such as love rare and dainty plants".[6] By the 17th century, the fruits were being pickled in brine or served up in tarts.

The appreciation of the early acid-yellow flowers is largely a 20th-century development.[9] The Royal Horticultural Society gave Cornus mas an Award of Garden Merit in 1924. The cultivars 'Golden glory'[10] and 'Variegata'[11] have also gained the award.