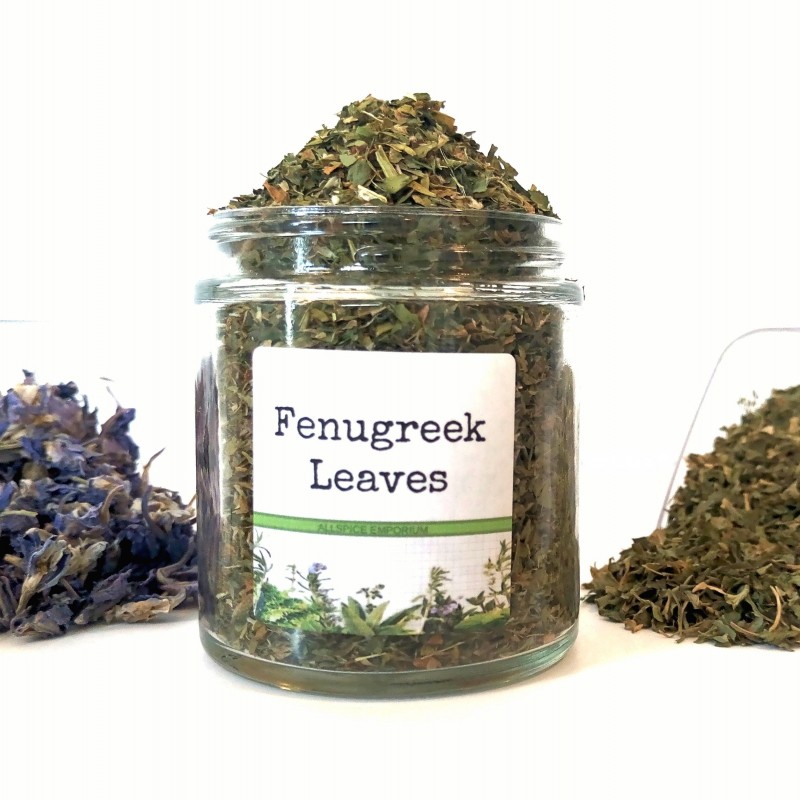 Dried fenugreek leaves - spice
Price is for packing of 2 grams of this spice.

Fenugreek (/ˈfɛnjʊɡriːk/; Trigonella foenum-graecum) is an annual plant in the family Fabaceae, with leaves consisting of three small obovate to oblong leaflets. It is cultivated worldwide as a semiarid crop. Its seeds and its leaves are common ingredients in dishes from

Dried fenugreek leaves - spice
Price is for packing of 2 grams of this spice.

Fenugreek (/ˈfɛnjʊɡriːk/; Trigonella foenum-graecum) is an annual plant in the family Fabaceae, with leaves consisting of three small obovate to oblong leaflets. It is cultivated worldwide as a semiarid crop. Its seeds and its leaves are common ingredients in dishes from South and Central Asia.

Fenugreek is believed to have been brought into cultivation in the Near East. While Zohary and Hopf are uncertain which wild strain of the genus Trigonella gave rise to domesticated fenugreek, charred fenugreek seeds have been recovered from Tell Halal, Iraq (carbon dated to 4000 BC), and Bronze Age levels of Lachish and desiccated seeds from the tomb of Tutankhamen. Cato the Elder lists fenugreek with clover and vetch as crops grown to feed cattle.

In one first-century A.D. recipe, the Romans flavoured wine with fenugreek. In the 1st century AD, in Galilee, it was grown as a food staple, as Josephus mentions it in his book, the Wars of the Jews.

Fenugreek is used as a herb (dried or fresh leaves), spice (seeds), and vegetable (fresh leaves, sprouts, and microgreens). Sotolon is the chemical responsible for fenugreek's distinctive sharp smell.

Cuboid-shaped, yellow- to amber-coloured fenugreek seeds are frequently encountered in the cuisines of the Indian subcontinent, used both whole and powdered in the preparation of pickles, vegetable dishes, dal, and spice mixes such as panch phoron and sambar powder. They are often roasted to reduce bitterness and enhance flavour.

Fresh fenugreek leaves are an ingredient in some curries, such as with potatoes in cuisines of the Indian subcontinent to make "aloo methi" ("potato fenugreek") curry. Sprouted seeds and fenugreek greens are used in salads. When harvested as greens, fenugreek is known as samudra methi in Maharashtra, especially in and around Mumbai, where it is often grown in sandy tracts near the sea, hence the name samudra, "ocean" in Sanskrit. Samudra methi is also grown in dry river beds in the Gangetic plains. When sold as a vegetable, the young plants are harvested with their roots still attached and sold in small bundles in the markets and bazaars. Any remaining soil is washed off to extend their shelf life.

In Turkish cuisine, fenugreek seeds are used for making a paste known as çemen. Cumin, black pepper, and other spices are added into it, especially to make pastırma. In Persian cuisine, fenugreek leaves are called shanbalile. They are the key ingredient and one of several greens incorporated into ghormeh sabzi and eshkeneh as common Iranian dishes.

In Egyptian cuisine, peasants in Upper Egypt add fenugreek seeds and maize to their pita bread to produce aish merahrah, a staple of their diet. Fenugreek is used in Eritrean and Ethiopian cuisine. The word for fenugreek in Amharic is abesh (or abish), and the seed is used in Ethiopia as a natural herbal medicine in the treatment of diabetes.

Yemenite Jews following the interpretation of Rabbi Shelomo Yitzchak (Rashi) believe fenugreek, which they call hilbeh, hilba, helba, orhalba "חילבה", to be the Talmudic rubia "רוביא". When the seed kernels are ground and mixed with water they greatly expand; hot spices, turmeric and lemon juice are added to produce a frothy relish eaten with a sop. The relish is also called hilbeh; it is reminiscent of curry. It is eaten daily and ceremonially during the meal of the first and/or second night of the Jewish New Year, Rosh Hashana.

In traditional medicine, fenugreek is thought to promote digestion, induce labour, and reduce blood sugar levels in diabetics, although the evidence that fenugreek has any therapeutic worth is lacking.

In herbalism, fenugreek is thought to increase breast milk supply in nursing mothers. This is not supported by good medical evidence and fenugreek intake is not recommended for this purpose.Fenugreek is sometimes used as animal feed. It provides a green fodder palatable to ruminants. The seeds are also used to feed fish, domestic rabbits and ruminants.