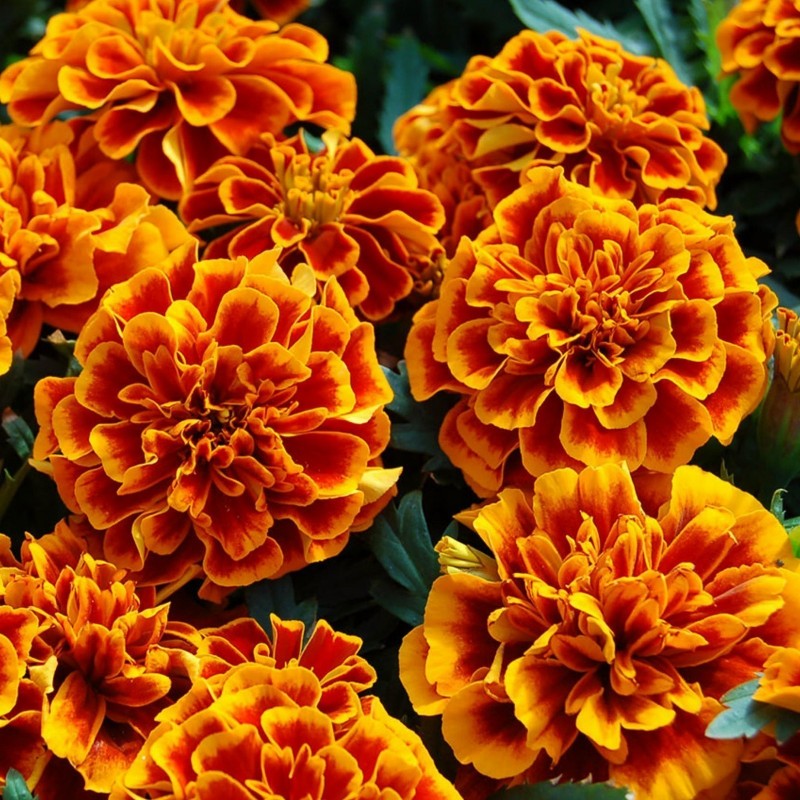 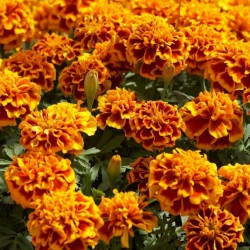 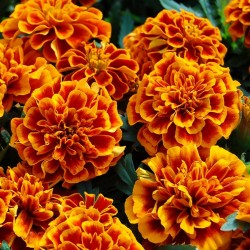 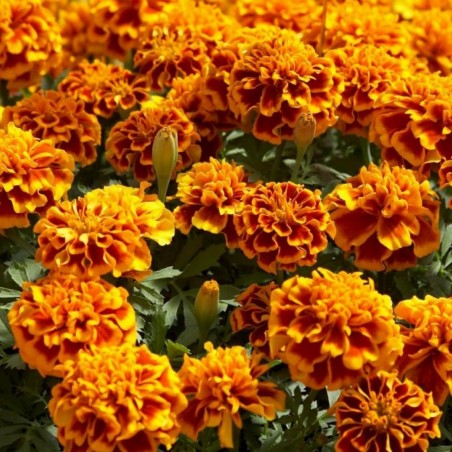 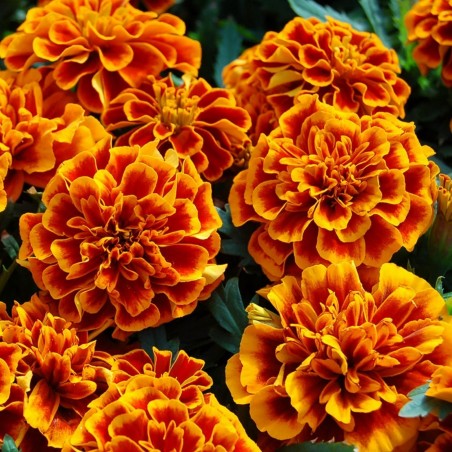 Tagetes is a genus of 56 species of annual and perennial mostly herbaceous plants in the sunflower family (Asteraceae or Compositae). The genus is native to North and South America, but some species have become naturalized around the world. One species, T. minuta, is considered a noxious invasive plant in some areas. Description Tagetes species vary in size from 0.01-2.2 m tall. Most species have pinnate green leaves. Blooms are naturally in golden, orange, yellow, and white colors, often with maroon highlights. Floral heads are typically (0.1-) to 4–6 cm diameter, generally with both ray florets and disc florets. In horticulture they tend to be planted as annuals, although the perennial species are gaining popularity. Depending on the species, Tagetes grow well in almost any sort of soil. Most horticultural selections grow best in soil with good drainage. Nomenclature The name Tagetes is from the name of the Etruscan Tages.
The common name in English, "marigold", is derived from "Mary's Gold", a name once exclusively applied to Calendula. In Nepal it is called 'शयपत्री' that means hundred leafed flower, referring to its many florets per head. The cultivated varieties are known variously as marigolds or variously as Mexican marigolds (or cempasúchil), African marigolds (usually referring to cultivars and hybrids of Tagetes erecta, although this species is not native to Africa), or French marigolds (usually referring to hybrids and cultivars of Tagetes patula, many of which were developed in France although the species is not native to that country). Tagetes minuta is a naturalized species in Africa, Hawaii, and Australia, and is considered an invasive species - weed in some regions.
Tagetes is not to be confused with the genus Calendula, which goes by "marigold" in some areas. See "marigold (disambiguation)" for this and other species commonly called marigold.
[edit]Cultivation and uses Depending on the species, marigold foliage has a musky, pungent scent, though some varieties have been bred to be scentless. It is said to deter some common insect pests, as well as nematodes. Tagetes are hence often used in companion planting for tomato, eggplant, chili pepper, tobacco and potato. Due to antibacterial thiophenes exuded by the roots, tagetes should not be planted near any legume crop. Some of the perennial species are deer-, rabbit-, rodent- and javalina or peccary-resistant.
T. minuta (khakibush or huacatay), originally from South America, has been used as a source of essential oil for the perfume and industry known as tagette or "marigold oil", and as a flavourant in the food and tobacco industries. It is commonly cultivated in South Africa, where the species is also a useful pioneer plant in the reclamation of disturbed land.
The florets of Tagetes erecta are rich in the orange-yellow carotenoid lutein and are used as a food colour (INS-Number E161b) in the European Union for foods such as pasta, vegetable oil, margarine, mayonnaise, salad dressing, baked goods, confectionery, dairy products, ice cream, yogurt, citrus juice and mustard. In the United States, however, the powders and extracts are only approved as colorants in poultry feed.
Marigolds are recorded as a food plant for some Lepidoptera caterpillars including the Dot Moth, and a nectar source for other butterflies. They are often part of butterfly gardening plantings. In the wild, many species are pollinated by beetles.
Cultural significance
[edit]Tagetes lucidaThe species Tagetes lucida, known as "pericón," is used to prepare a sweetish, anise flavored medicinal tea in Mexico. It is also used as a culinary herb in many warm climates, as a substitute for tarragon, and offered in the nursery as "Texas tarragon" or "Mexican mint marigold".
Tagetes patula flowers
Tagetes minuta
Tagetes minuta, native to southern South America is a tall upright marigold plant with small flowers, and is used as a culinary herb in Peru, Ecuador, and parts of Chile and Bolivia, where it is called by the Incan term huacatay. Huacatay paste is used to make the popular potato dish called ocopa. Having both "green" and "yellow/orange" notes, the taste and odor of fresh Tagetes minuta is like a mixture of sweet basil, tarragon, mint and citrus. It is also used as a medicinal tea in some areas.
Tagetes - various species
The marigold is very significant in Nepalese culture where marigold garlands are used almost in every household especially during the Tihar festival. It is always sold in the markets for daily worships and rituals.
The marigold was regarded as the flower of the dead in pre-Hispanic Mexico, parallel to the lily in Europe, and is still widely used in the Day of the Dead celebrations. The marigold is also widely cultivated in India and Thailand, particularly the species T. erecta, T. patula, and T. tenuifolia. Vast quantities of marigolds are used in garlands and decoration for weddings, festivals, and religious events. Marigold cultivation is extensively seen in Andhra Pradesh, Tamil Nadu, West Bengal, Karnataka, and Uttar Pradesh
In Ukraine, Chornobryvtsi (Tagetes erecta, Tagetes patula, and the signet marigold, Tagetes tenuifolia) are regarded as one of the national symbols, and are often mentioned in songs, poems and tales.Other marigolds have other uses around the world.
F 19
9993 Items 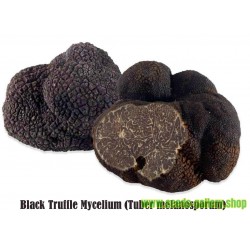 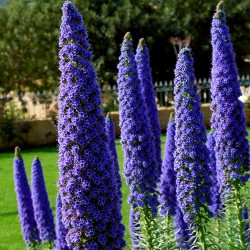 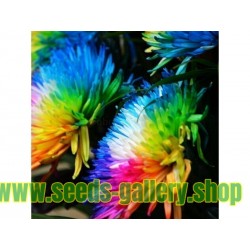 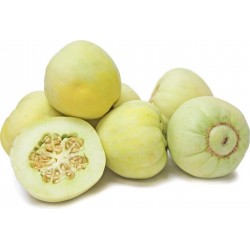 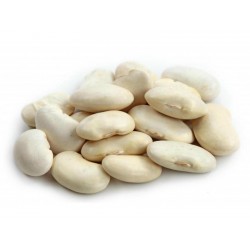 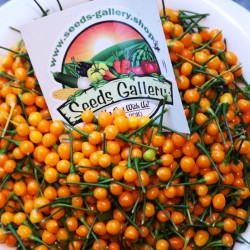 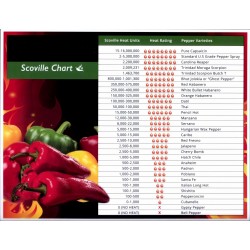 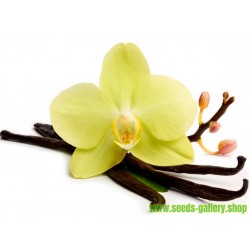