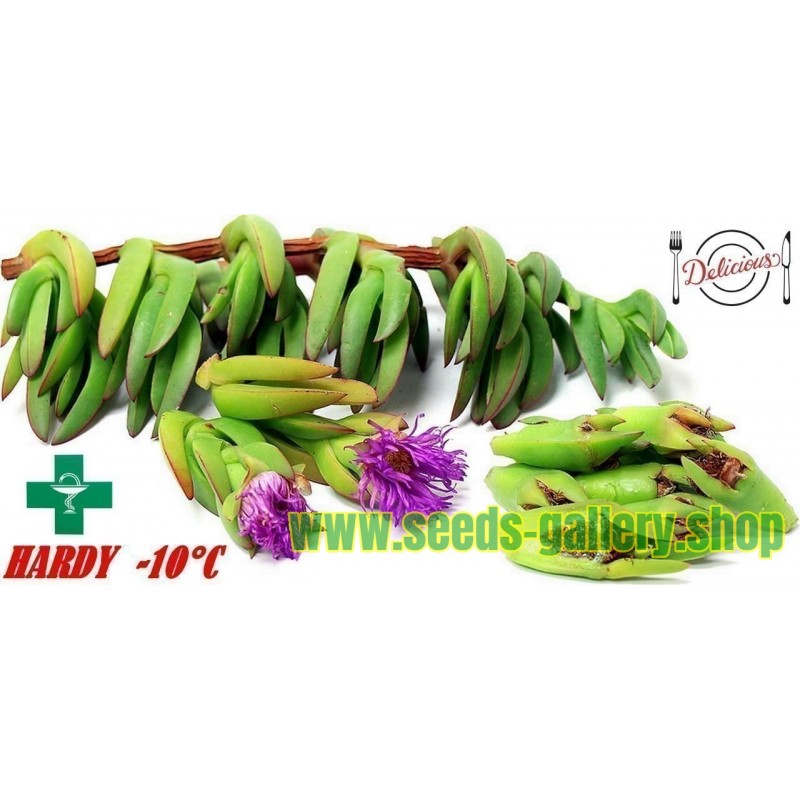 Ice plant grows in dense mats with stems that spread out horizontally over the ground. The tightly packed three-sided leaves are 6-10 cm long and have a succulent appearance. They are yellowish or grassy

Ice plant grows in dense mats with stems that spread out horizontally over the ground. The tightly packed three-sided leaves are 6-10 cm long and have a succulent appearance. They are yellowish or grassy-green when new, but become rusty-orange with age. Its vibrant blossoms range in color from yellow to magenta and resemble a sea anemone. After the flowers dry and turn brown they shrink back revealing the Ice plant’s forgeable fruit. Fruits are 3-4 cm in diameter with a seed structure similar to that of a fig. Its jelly-like interior is sour and salty with a grassy flavor. When fully ripened, Ice plant becomes sweeter with mild tropical notes. They should be foraged when the fruit’s outer wall yellows and takes on a leathery appearance.

Ice plant grows year-round, with fruit ripening in the summer.

Ice plant is a trailing perennial botanically known as Carpobrotus edulis. Also called Sour fig, Cape fig, Sea fig or Hottentot fig, it actually has no relation to the common fig as we know it. Due to its sprawling carpet-like structure, Ice plant is often grown along highways for erosion control. It can grow as much as one meter per year and in certain areas is deemed an invasive species.

Ice plant is mostly water and therefore a low calorie food. It is rich in vitamins A, B and C, mineral salts and trace elements. The juice of Ice plant leaves has antiseptic properties that may be used topically for infections or taken orally for digestive problems. The astringents in Ice plant can seal damaged blood vessels and may be used to treat minor cuts.

The fruit of Ice plant may be eaten raw, dried or preserved as a jam. The outer green membrane is highly astringent and should be removed. The inner pulp can be extracted simply by slicing off the top and squeezing out the sticky gelatinous seeds. Ice plant fruit’s thick texture is used to richen salad dressings and sauces.

Ice plant is native to South Africa, but today can be found in California, Florida, Australia, England and parts of the Mediterranean. It is a drought tolerant species that grows in full sun on well drained, loose sandy soil or rocky outcroppings.

Recipe Ideas
Recipes that include Ice Plant. One  is easiest, three is harder.

Seed - surface sow March to June in a greenhouse. Lower night-time temperatures are beneficial. The seed usually germinates in 7 - 10 days at 23°c. When they are large enough to handle, prick the seedlings out into individual pots and grow them on in a greenhouse for at least their first winter. Plant them out into their permanent positions in late spring or early summer, after the last expected frosts. Cuttings at any time during the growing season. Allow the cutting to dry in the sun for a day or two then pot up in a very sandy mix. Very easy.