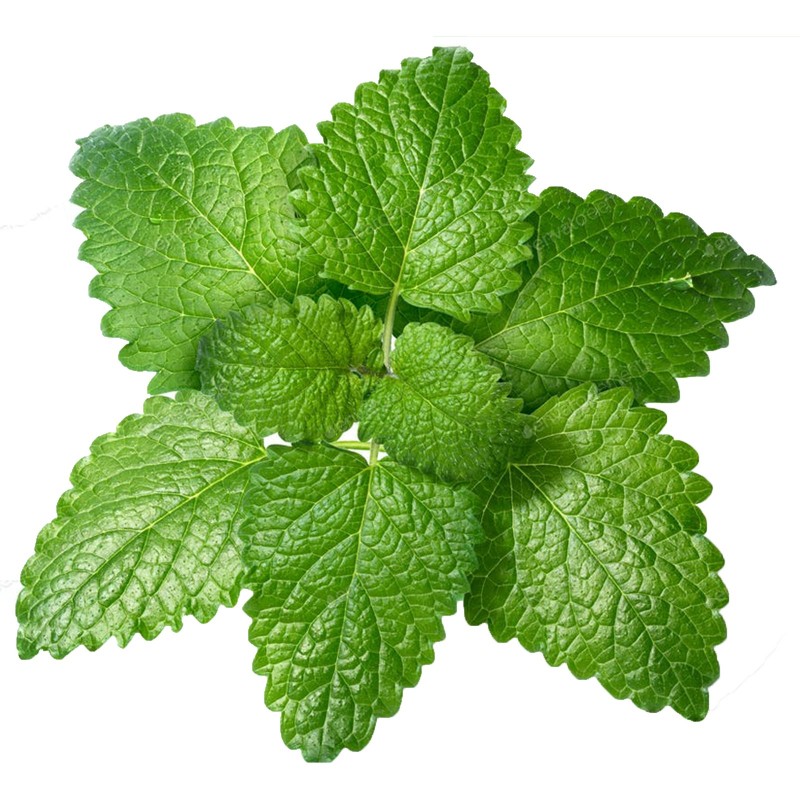 Lemon balm (Melissa officinalis), balm, common balm, or balm mint, is a perennial herbaceous plant in the mint family Lamiaceae and native to south-central Europe, the Mediterranean Basin, Iran, and Central Asia, but now naturalized in the Americas and

Lemon balm (Melissa officinalis), balm, common balm, or balm mint, is a perennial herbaceous plant in the mint family Lamiaceae and native to south-central Europe, the Mediterranean Basin, Iran, and Central Asia, but now naturalized in the Americas and elsewhere.

It grows to a maximum height of 70–150 cm (28–59 in). The leaves have a mild lemon scent similar to mint. During summer, small white flowers full of nectar appear. It is not to be confused with bee balm (genus Monarda), although the white flowers attract bees, hence the genus Melissa (Greek for "honey bee"). 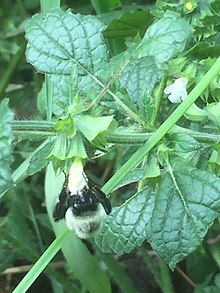 a bumblebee feeding on a lemon balm flower
The leaves are used as a herb, in teas, and also as a flavouring. The plant is used to attract bees for honey production. It is grown as an ornamental plant and for its oil (to use in perfumery). The tea of lemon balm, the essential oil, and the extract are used in traditional and alternative medicine, including aromatherapy. The plant has been cultivated at least since the 16th century, but research is still being conducted to establish the safety and effects of lemon balm.

Sources date the medicinal use of lemon balm to over 2000 years ago through the Greeks and Romans. It is mentioned by Theophrastus in the Historia Plantarum, dated to around 300 BC,[5] as "honey-leaf" (μελισσόφυλλον).[6] Lemon balm was formally introduced into Spain in the 7th century, from which its use and domestication spread throughout Europe.[5] Its use in the Middle Ages is noted by herbalists, writers, philosophers, and scientists, with Swiss physician and alchemist, Paracelsus, deeming it the “elixir of life”.[7][8]It was in the herbal garden of John Gerard, 1596.[9] Lemon balm was introduced to North America with the arrival of early colonists, and is recorded to have been among the herbs cultivated in Thomas Jefferson's garden.[10]

The plant is used to attract bees to make honey. It is also grown and sold as an ornamental plant. The essential oil is used as a perfume ingredient,[11] but the plant has other culinary and medicinal uses. Lemon balm is used in some toothpastes.[12]

Lemon balm is used as a flavouring[11] in ice cream and herbal teas, both hot and iced, often in combination with other herbs such as spearmint. It is a common addition to peppermint tea, mostly because of its complementing flavor.[citation needed]

Lemon balm is also paired with fruit dishes or candies. Additionally, it can be used in fish dishes and is the main ingredient in lemon balm pesto.[13]:15–16 Its flavour comes from citronellal (24%), geranial (16%), linalyl acetate (12%) and caryophyllene (12%).[citation needed]

It is also one of the ingredients in Spreewald gherkins.

In traditional Austrian medicine, M. officinalis leaves have been prescribed for internal use—as a tea—or external application—as an essential oil—for the treatment of disorders of the gastrointestinal tract, nervous system, liver, and bile.[14] Lemon balm is the main ingredient of Carmelite water, which is still for sale in German pharmacies.[15]

In alternative medicine it is used as a sleep aid and digestive aid.[16]

Nicholas Culpeper considered lemon balm to be ruled by Jupiter in Cancer, and suggested it to be used for weak stomachs, to cause the heart to become merry, to help digestion, to open obstructions of the brain, and to expel melancholy vapors from the heart and arteries.[18]

The herbalist John Gerard considered it especially good for feeding and attracting honeybees. The alchemist Paracelsus believed that lemon balm had the power to restore health and vitality.[19] Traditionally, an alchemical tincture of lemon balm was the first tincture an aspiring alchemist made.[20]

Melissa officinalis is native to Europe, central Asia and Iran, but is now naturalized around the world.

Lemon balm seeds require light and at least 20 °C (70 °F) to germinate. Lemon balm grows in clumps and spreads vegetatively, as well as by seed. In mild temperate zones, the stems of the plant die off at the start of the winter, but shoot up again in spring. Lemon balm grows vigorously; it should not be planted where it will spread into other plantings.

As of 1992, the major producing countries were Hungary, Egypt, and Italy for herb, and Ireland for essential oil.

Lemon balm, including lemon balm extract, has been shown to improve sleep quality.[23][24][5] Pediatric patients have displayed improvement in restlessness and dyssomnia with the ingestion of lemon balm extract.[23]Further evidence has demonstrated a significant reduction in levels of insomnia.[24]

Lemon balm is commonly associated with anti-stress and anti-anxiety.[25][26][27] Studies have shown a significant increase in calmness in healthy patients exposed to lemon balm when compared to placebo.[25] In addition, lemon balm ingestion is linked to improvement in mood and cognitive performance.[26][25] Gender and administration length appear to have an impact on the effectiveness of lemon balm as a treatment for depression in rats.[27]

The composition and pharmacology and potential uses of lemon balm have been extensively studied, especially with regard to its traditional uses.[32] Randomized, double-blinded clinical studies in people, however, have been limited and have had few subjects. Those studies cannot be used for generalized conclusions about the safety or efficacy of lemon balm and its components; what doses are safe and effective is especially not clear.[32]

Rosmarinic acid appears to be the most important active component, but the interaction of chemicals within lemon balm, and with chemicals in other herbs with which it has been commonly used in traditional medicines, is poorly understood.[32] Lemon balm leaf contains roughly 36.5 ± 0.8 mg rosmarinic acid per gram.