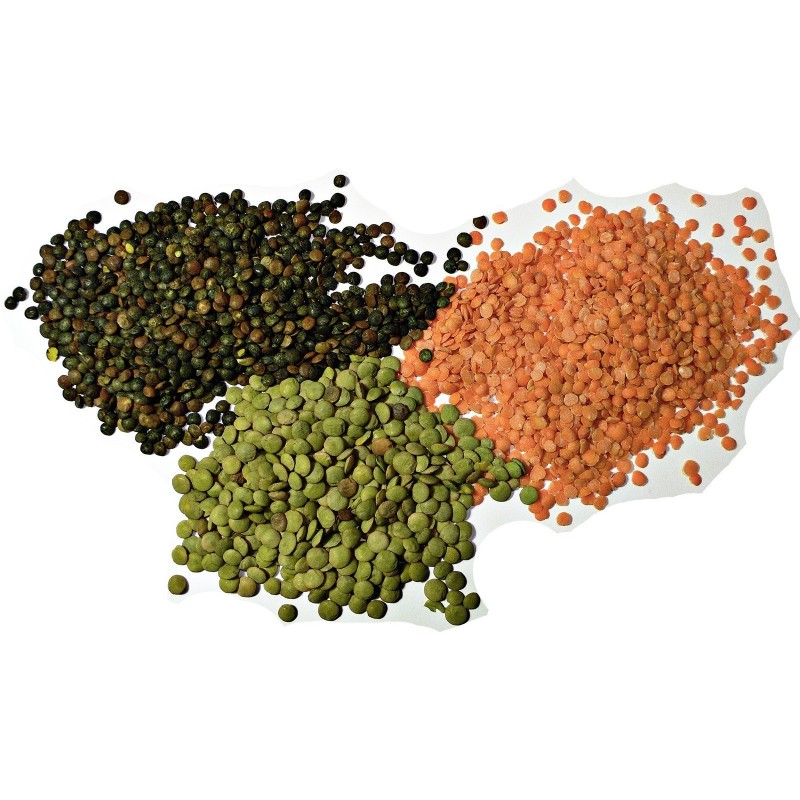 The lentil (Lens culinaris) is an edible pulse. It is a bushy annual plant of the legume family, grown for its lens-shaped seeds. It is about 40 cm (16 in) tall, and the seeds grow in pods, usually with two seeds in each. Lentils have been part of the human diet since the aceramic (before pottery) Neolithic times, being one of

The lentil (Lens culinaris) is an edible pulse. It is a bushy annual plant of the legume family, grown for its lens-shaped seeds. It is about 40 cm (16 in) tall, and the seeds grow in pods, usually with two seeds in each.

Lentils have been part of the human diet since the aceramic (before pottery) Neolithic times, being one of the first crops domesticated in the Near East. Archeological evidence shows they were eaten 9,500 to 13,000 years ago.

Lentil colors range from yellow to red-orange to green, brown and black. Lentils also vary in size, and are sold in many forms, with or without the skins, whole or split.

The seeds require a cooking time of 10 to 40 minutes, depending on the variety—shorter for small varieties with the husk removed, such as the common red lentil — and have a distinctive, earthy flavor. Lentil recipes[2] are used throughout South Asia, the Mediterranean regions and West Asia. They are frequently combined with rice, which has a similar cooking time. A lentil and rice dish is referred to in western Asia as mujaddara or mejadra. Rice and lentils are also cooked together in khichdi, a popular dish in the Indian subcontinent (India and Pakistan); a similar dish, kushari, made in Egypt, is considered one of two national dishes. Lentils are used to prepare an inexpensive and nutritious soup all over Europe and North and South America, sometimes combined with some form of chicken or pork.

Dried lentils can also be sprouted by soaking in water for one day and keeping moist for several days, which changes their nutrition profile.

Lentils with husk remain whole with moderate cooking; lentils without husk tend to disintegrate into a thick purée, which leads to quite different dishes.

Lentils also contain dietary fiber, folate, vitamin B1, and minerals. Red (or pink) lentils contain a lower concentration of fiber than green lentils (11% rather than 31%).[8] Health magazine has selected lentils as one of the five healthiest foods.

The low levels of Readily Digestible Starch (RDS) 5%, and high levels of Slowly Digested Starch (SDS) 30%, make lentils of great interest to people with diabetes. The remaining 65% of the starch is a resistant starch that is classified RS1, being a high quality resistant starch, which is 32% amylose.

Lentils also have some anti-nutritional factors, such as trypsin inhibitors and relatively high phytate content. Trypsin is an enzyme involved in digestion, and phytates reduce the bio-availability of dietary minerals.  The phytates can be reduced by soaking the lentils in warm water overnight.

Lentils are a good source of iron, having over half of a person's daily iron allowance in a one cup serving.

Lentils are relatively tolerant to drought, and are grown throughout the world. The FAO reported that the world production of lentils for calendar year 2009 was 3.917 million metric tons, primarily coming from Canada, India, Turkey and Australia.

About a quarter of the worldwide production of lentils is from India, most of which is consumed in the domestic market. Canada is the largest export producer of lentils in the world and Saskatchewan is the most important producing region in Canada. Statistics Canada estimates that Canadian lentil production for the 2009/10 year is a record 1.5 million metric tons.

The Palouse region of eastern Washington and the Idaho panhandle, with its commercial center at Pullman, Washington, constitute the most important lentil-producing region in the United States. Montana and North Dakota are also significant lentil growers. The National Agricultural Statistics Service reported United States 2007 production at 154.5 thousand metric tons.

The lens (double-convex shaped) is so called because the shape of a lens is basically the same shape as lentils. Lens is the Latin name for lentil.

Lentils are mentioned many times in the Hebrew Bible, the first time recounting the incident in which Jacob purchases the birthright from Esau with stewed lentils (a "mess of pottage").[16] In Jewish mourning tradition, lentils are traditional as food for mourners, together with boiled eggs, because their round shape symbolizes the life cycle from birth to death.

Lentils were a chief part of the diet of ancient Iranians, who consumed lentils daily in the form of a stew poured over rice.

Lentils are also commonly used in Ethiopia in a stew-like dish called kik, or kik wot, one of the dishes people eat with Ethiopia's national food, injera flat bread. Yellow lentils are used to make a non-spicy stew, which is one of the first solid foods Ethiopian women feed their babies. In Pakistan, lentils are often consumed with Roti/bread or rice.

In India, lentils soaked in water and sprouted lentils are offered to gods in many temples. It is also a practice in South India to give and receive sprouted peas by women who perform Varalakshmi Vratam. It is considered to be one of the best foods because the internal chemical structures are not altered by cooking.

In Italy and Hungary, eating lentils on New Year's Eve traditionally symbolizes the hope for a prosperous new year, most likely because of their round, coin-like form.

In Shia narrations, lentils are said to be blessed by seventy Prophets, including Jesus and Mohammed.