Variety from Serbia
Plant resistant to cold and frost 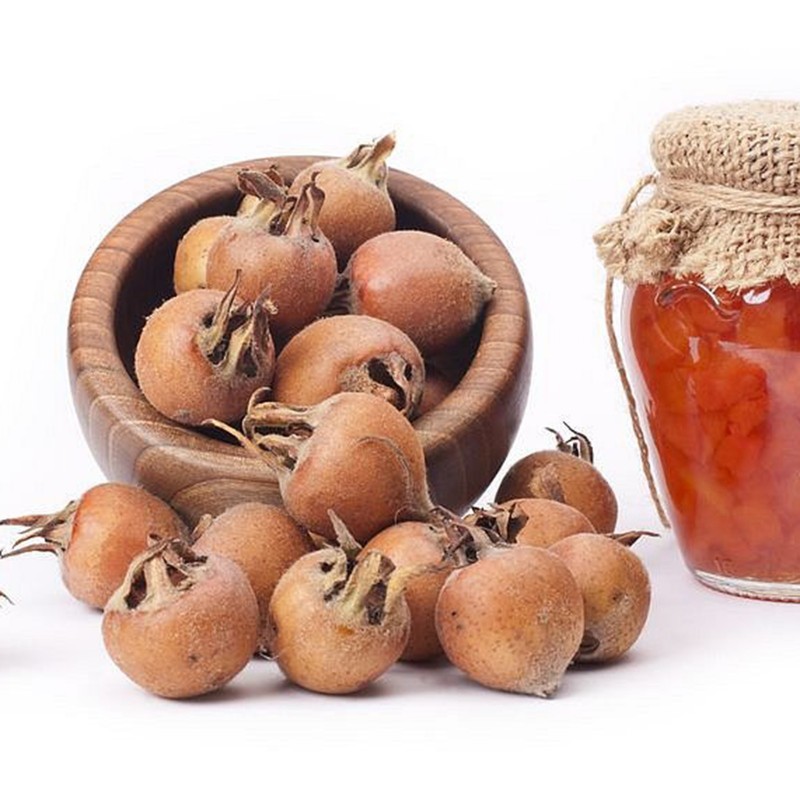 Mespilus germanica, known as the medlar or common medlar, is a large shrub or small tree, and the name of the fruit of this tree. The fruit has been cultivated since Roman times, and is unusual in being available

Mespilus germanica, known as the medlar or common medlar, is a large shrub or small tree, and the name of the fruit of this tree. The fruit has been cultivated since Roman times, and is unusual in being available in winter, and in being eaten when 'bletted' (browned by rot). It is eaten raw and in a range of dishes.

Despite its Latin name, which means German or Germanic medlar, it is indigenous to southwest Asia and also southeastern Europe, especially the Black Sea coasts of modern Turkey. It may have been cultivated for as long as 3000 years.

Until recently, Mespilus germanica was the only known species of the medlar. However, in 1990, a new species was discovered in North America, now named Mespilus canescens. The loquat, Eriobotrya japonica, is more distantly related than genera such as Crataegus, Amelanchier, Peraphyllum, and Malacomeles,[2] but was once thought to be closely related, and is still sometimes called the 'Japanese medlar'.

From an extensive study of literature and plant specimens, Kazimierz Borowicz concluded that the true homeland [of Mespilus germanica] is only in the south-eastern part of the Balkan peninsula, in Asia Minor, on the Caucasus, Crimea, northern Iran and possibly also in Turkmenia.

Mespilus germanica requires warm summers and mild winters and prefers sunny, dry locations and slightly acidic soil. Under ideal circumstances, the deciduous plant grows up to 8 metres (26 ft) tall. Generally, it is shorter and more shrub-like than tree-like. With a lifespan of 30–50 years, the medlar tree is rather short-lived. Its bark is greyish brown with deep vertical cracks forming rectangular plates that tend to lift off. The leaves are dark green and elliptic, 8–15 centimetres (3.1–5.9 in) long and 3–5 centimetres (1.2–2.0 in) wide. The leaves are densely hairy (pubescent) below, and turn red in autumn before falling. It is found across Southern Europe where it is generally rare. It is reported to be naturalized in some woods in Southeast England, but is found in few gardens.[3]

The flowers have five broadly ovate white petals.[3] The flowers appear in late spring, are hermaphrodite, pollinated by bees, and self-fertile.[4] The flower is 6 centimetres (2.4 in) wide. The reddish-brown fruit is a pome, 2–3 centimetres (0.79–1.2 in) diameter, with wide-spreading persistent sepals around a central pit, giving a 'hollow' appearance to the fruit.

The medlar was already being cultivated about three thousand years ago in the Caspian Sea region of northern Iran. It was introduced to Greece around 700 BC, and to Rome about 200 BC. It was an important fruit plant during Roman and medieval times. By the 17th and 18th century, however, it had been superseded by other fruits, and is little cultivated today. M. germanica pomes are one of the few fruits that become edible in winter, making it an important tree for gardeners who wish to have fruit available all year round. M. germanica plants can be grafted on to the rootstock of another species, for example the pear, quince, or hawthorn, to improve their performance in different soils.

Mespilus germanica fruits are hard, acidic, and high in bitter tannins. They become edible after being softened, 'bletted', by frost, or naturally in storage given sufficient time. Once softening begins the skin rapidly takes a wrinkled texture and turns dark brown, and the inside reduces to the consistency and flavour reminiscent of apple sauce. This process can confuse those new to medlars, as a softened fruit looks as if it has spoiled.

Once bletted, the fruit can be eaten raw, and are often eaten as a dessert, for example with cheese or tarts,[8] or used to make medlar jelly[9] and wine. Another dish is "medlar cheese", which is similar to lemon curd, being made with the fruit pulp, eggs, and butter. So-called medlar tea is usually not made from M. germanica but from wolfberry or goji, which is sometimes called "red medlar".

Cultivars of Mespilus germanica that are grown for their fruit include 'Hollandia', 'Nottingham', and 'Russian',[11] the large-fruited variety 'Dutch' (also known as 'Giant' or 'Monstrous'), 'Royal', 'Breda giant', and 'Large Russian'.

In Iran, the fruits, leaves, bark and wood of the tree have been used as medicines for ailments including diarrhoea, bloating of the stomach, throat abscesses and fever.