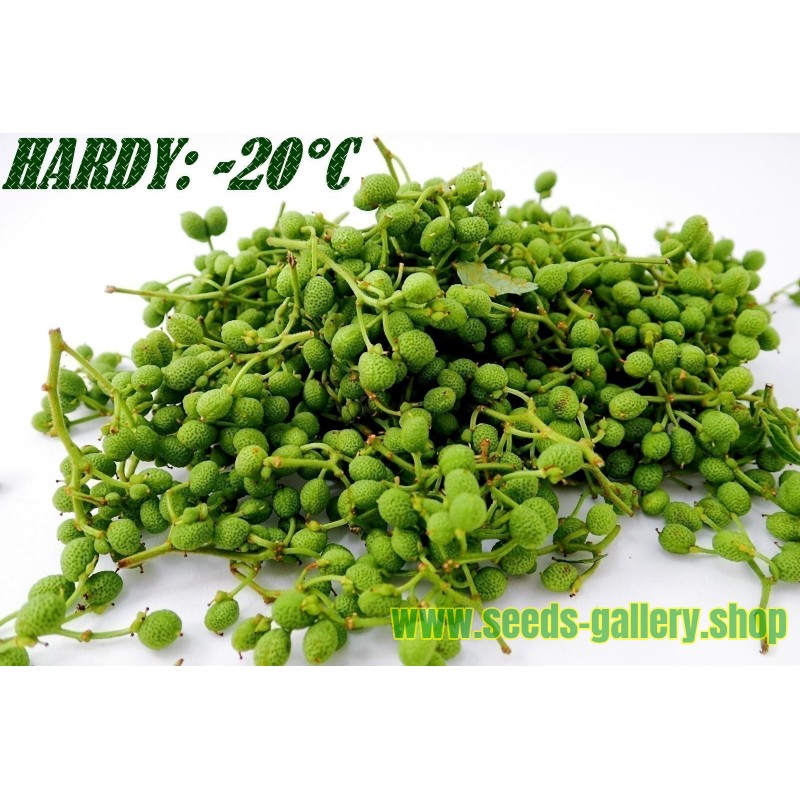 Zanthoxylum armatum, also called winged prickly ash, is a species of plant in the Rutaceae family. It is an aromatic, deciduous spice tree, spiny shrub growing to 3.5 meters in height, endemic to China

Zanthoxylum armatum, also called winged prickly ash, is a species of plant in the Rutaceae family. It is an aromatic, deciduous spice tree, spiny shrub growing to 3.5 meters in height, endemic to China, Japan, and Korea.

Stimulant to the circulatory, digestive and lymphatic systems and used for rheumatism and skin disease, nervous headaches, varicose veins, congestion and as a convalescent tonic. Excellent for easing the discomfort of any sort of respiratory ailment, either inhaled, or as a chest rub.

Seeds require stratification. Semi-ripe and root cuttings work, as do suckers, removed in late winter and planted into their permanent positions.

Seed - best sown in a greenhouse as soon as it is ripe in the autumn. Stored seed may requires up to 3 months cold stratification, though scarification may also help[13]. Sow stored seed in a cold frame as early in the year as possible. Germination should take place in late spring, though it might take another 12 months. Prick out the seedlings into individual pots when they are large enough to handle and grow them on in a cold frame for their first winter. Plant them out in early summer.

This species is closely related to Z. planispinum. Flowers are formed on the old wood.

Dioecious. Male and female plants must be grown if seed is required.

Pick the fuits when the papery shells begin to split, showing the black seeds inside. Pick a whole head of fruits at a time, stems and all.

There are no interactions listed for Zanthoxylum armatum. Do you know of an interaction that should be listed here? edit this page to add it.

There are no polycultures listed which include Zanthoxylum armatum.

Ayurvedic medication has explored numerous natural remedies for treating liver diseases, which are still in use in many parts of India since centuries. When compared to modern medications like immunosuppressive agents and corticosteroids, these natural Ayurvedic remedies are claimed to grant better relief in a longer run. Tomar seed oil is said to possess antioxidant properties and it also contains phenolic compounds. It is a proven fact that plants that contain antioxidant property is also said to exhibit hepatoprotective action. A renowned study on ‘Hepatoprotective Effect of Zanthoxylum armatum DC’ proved that the presence of ethanolic extracts in Zanthoxylum armatum showed hepatoprotective effect against liver damage by regularizing the increased levels of the hepatic enzymes and showed shielding effect on the plasma membrane of hepatocytes. This proved the effectiveness of using this herb in Ayurvedic treatment for liver disorders. Natural insecticide: The essential oil of Tomar seeds yielded nearly 28 compounds and the major ones being monoterpenes and oxygenated monoterpenes. This oil also showed antifungal properties against 24 different fungi. It also exhibited repellent and larvicidal activity against three mosquito vectors, proving it as an effective natural alternative to chemical larvicides. Other health benefits: This oil was trusted to give warmness to the body and was recommended for treating ailments like rheumatism, bronchitis, indigestion, asthma, varicose veins, toothaches and cholera. It was also proved that Zanthoxylum armatum showed spasmolytic effects that make it a natural remedy for treating cardiovascular, respiratory and gastrointestinal disorders. Another research published in PubMed evidenced the antioxidant, antifungal, antiaflatoxin activity of this essential oil. Tomar seed oil has also been used as a gentle massage oil blended with carrier oils like coconut oil to treat fibrositis, rheumatism, leg cramps, varicose veins and certain other skin problems. It is also said to stimulate the mucous membranes, lymphatic system and promote blood circulation. Disclaimer: All essential oils are highly concentrated liquids and applying them directly on your skin or taking it internally is not advisable unless and otherwise recommended by your Ayurvedic practitioner as per your health conditions.