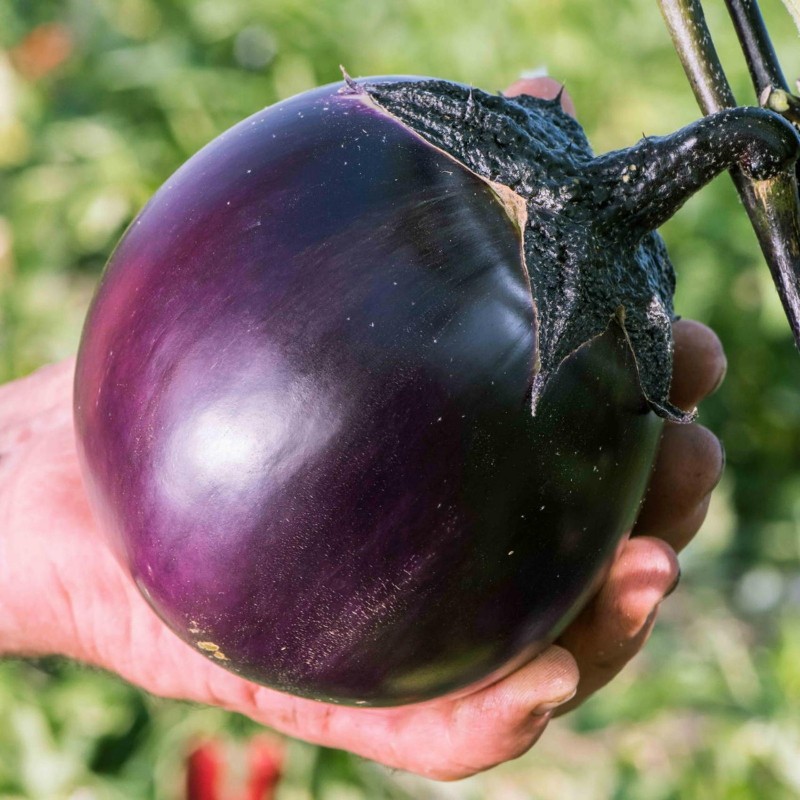 Lovely, black fruit are almost perfectly round in shape and the size of a grapefruit, with deep purple color. A wonderful variety for stuffing, with great tasting, tender flesh. A traditional French

Lovely, black fruit are almost perfectly round in shape and the size of a grapefruit, with deep purple color. A wonderful variety for stuffing, with great-tasting, tender flesh. A traditional French heirloom named after the city of Valence, a quaint city on the Rhone River.

The eggplant, brinjal eggplant, aubergine, melongene, brinjal or guinea squash (Solanum melongena) is a plant of the family Solanaceae (also known as the nightshades) and genus Solanum. It bears a fruit of the same name, commonly used in cooking. As a nightshade, it is closely related to the tomato and potato. It was domesticated in India from Solanum incanum.

The fruit is botanically classified as a berry and contains numerous small, soft seeds which are edible, but have a bitter taste because they contain nicotinoid alkaloids; this is unsurprising as it is a close relative of tobacco.

The plant is native to the Indian Subcontinent.[1][2] It has been cultivated in southern and eastern Asia since prehistory,[citation needed] but appears to have become known to the Western world no earlier than circa 1500. The first known written record of the plant is found in Qí mín yào shù, an ancient Chinese agricultural treatise completed in 544.[4] The numerous Arabic and North African names for it, along with the lack of the ancient Greek and Roman names, indicate it was introduced throughout the Mediterranean area by the Arabs in the early Middle Ages. The specific name melongena is derived from a 16th-century Arabic term for one variety.

The name "aubergine" is from the French, a diminutive of auberge, a variant of alberge, ‘a kind of peach’ or from the Spanish alberchigo or alverchiga, ‘an apricocke’.[5] It may be also be derived from Catalan albergínia, from Arabic al-baðinjān from Persian bâdenjân, from Sanskrit vātiga-gama).

Aubergine is also the name of the purple color resembling that of the fruit,[5] and is a commonly known color scheme[6] applied to articles as diverse as cloth or bathroom suites.

The popular name "eggplant" is used in the United States, Australia, New Zealand, and Canada. It derives from the fruits of some 18th-century European cultivars which were yellow or white and resembled goose or hen's eggs.[7] In Indian native languages Hindi and Urdu, it is called "Baingan"or"Baigan".[8]

In Indian, South African, Malaysian and Singaporean English, the fruit is called baigan brinjal, being derived directly from the Portuguese beringela. A less common British English word is melongene, which is also from French (derived) from Italian melanzana from Greek μελιτζάνα. In the Caribbean Trinidad, it also goes by meloongen from melongene.

Because of the plant's relationship with the Solanaceae (nightshade) family, the fruit was at one time believed to be extremely poisonous. The flowers and leaves, though, can be poisonous if consumed in large quantities, due to the presence of solanine.[9]

The raw fruit can have a somewhat bitter taste, but becomes tender when cooked and develops a rich, complex flavor. Many recipes advise salting, rinsing and draining of the sliced fruit (known as "degorging"), to soften it and to reduce the amount of fat absorbed during cooking, but mainly to remove the bitterness of the earlier cultivars. Some modern varieties - including large, purple varieties commonly imported into western Europe - do not need this treatment. The fruit is capable of absorbing large amounts of cooking fats and sauces, making for very rich dishes, but salting reduces the amount of oil absorbed. The fruit flesh is smooth; as in the related tomato, the numerous seeds are soft and edible along with the rest of the fruit. The thin skin is also edible.

The plant is used in the cuisine of many countries. It is often stewed, as in the French ratatouille, or deep fried as in the Italian parmigiana di melanzane, the Turkish karnıyarık or Turkish and Greek musakka/moussaka, and Middle-Eastern and South Asian dishes. Eggplants can also be battered before deep-frying and served with a sauce made of tahini and tamarind. In Iranian cuisine, it can be blended with whey as kashk e-bademjan, tomatoes as mirza ghasemi or made into stew as khoresh-e-bademjan. It can be sliced and deep-fried, then served with plain yogurt, (optionally) topped with a tomato and garlic sauce, such as in the Turkish dish patlıcan kızartması (meaning: fried aubergines) or without yogurt as in patlıcan şakşuka. Perhaps the best-known Turkish eggplant dishes are İmam bayıldı (vegetarian) and Karnıyarık (with minced meat).

It may also be roasted in its skin until charred, so the pulp can be removed and blended with other ingredients, such as lemon, tahini, and garlic, as in the Middle Eastern baba ghanoush and the similar Greek melitzanosalata. Grilled, mashed and mixed with onions, tomatoes and spices make the Indian and Pakistani dish baingan ka Bhartha or gojju, similar to salată de vinete in Romania, while a mix of roasted eggplant, roasted red peppers, chopped onions, tomatoes, mushrooms, carrots, celery and spices is called zacuscă in Romania or ajvar in Croatia and the Balkans. A simpler version of the dish, baigan-pora (eggplant-charred or burnt), is very popular in the east Indian states of Orissa and Bengal, and Bangladesh where the pulp of vegetable is mixed with raw chopped onions, green chillies, salt and mustard oil. Sometimes fried whole tomatoes and burnt potatoes are also added which is called baigan bharta. A Spanish dish called escalivada calls for strips of roasted aubergine, sweet pepper, onion and tomato. In Spain, is typical to find eggplant as berenjenas de Almagro. There, eggplants are also cooked with vinegar, red peppers, paprika and olive oil.

The fruit can also be hollowed out and stuffed with meat, rice, or other fillings, and then baked. In the Caucasus, for example, it is fried and stuffed with walnut paste to make nigvziani badrijani. It can also be found in Chinese cuisine, braised (紅燒茄子), stewed (魚香茄子), steamed (凉拌茄子), or stuffed (釀茄子).

As a native plant, it is widely used in Indian cuisine, for example in sambhar, dalma (a dal preparation with vegetables, native to Orissa), chutney, curry, and achaar. Owing to its versatile nature and wide use in both everyday and festive Indian food, it is often described (under the name brinjal) as the "king of vegetables". In one dish[which?], brinjal is stuffed with ground coconut, peanuts, and masala, and then cooked in oil.

In tropical and subtropical climates, eggplant can be sown directly into the garden. Eggplant grown in temperate climates fares better when transplanted into the garden after all danger of frost is passed. Seeds are typically started eight to 10 weeks prior to the anticipated frost-free date.

Many pests and diseases which afflict other solanaceous plants, such as tomato, pepper (capsicum), and potato, are also troublesome to eggplants. For this reason, it should not be planted in areas previously occupied by its close relatives. Four years should separate successive crops of eggplants. Common North American pests include the potato beetles, flea beetles, aphids, and spider mites. (Adults can be removed by hand, though flea beetles can be especially difficult to control.) Good sanitation and crop rotation practices are extremely important for controlling fungal disease, the most serious of which is Verticillium.

Spacing should be 45 cm (18 in.) to 60 cm (24 in.) between plants, depending on cultivar, and 60 cm to 90 cm (24 to 36 in.) between rows, depending on the type of cultivation equipment being used. Mulching will help conserve moisture and prevent weeds and fungal diseases. The flowers are relatively unattractive to bees and the first blossoms often do not set fruit. Hand pollination will improve the set of the first blossoms. Fruits are typically cut from the vine just above the calyx owing to the somewhat woody stems. Flowers are complete, containing both female and male structures, and may be self-pollinated or cross-pollinated.

The results of a 2000 study on humans suggested S. melongena infusion had a modest and transitory effect, no different from diet and exercise.[14]

A 2004 study on humans at the Heart Institute of the University of São Paulo found no effects at all and did not recommend eggplant as an alternative to statins.[15]

Case reports of itchy skin or mouth, mild headache, and stomach upset after handling or eating eggplant have been reported anecdotally and published in medical journals (see also oral allergy syndrome). A 2008 study of a sample of 741 people in India, where eggplant is commonly consumed, found nearly 10% reported some allergic symptoms after consuming eggplant, while 1.4% showed symptoms within less than two hours.[17] Contact dermatitis from eggplant leaves[18] and allergy to eggplant flower pollen[19] have also been reported. Individuals who are atopic(genetically predisposed to developing certain allergic hypersensitivity reactions) are more likely to have a reaction to eggplant, which may be because eggplant is high in histamines. A few proteins and at least one secondary metabolite have been identified as potential allergens.[20] Cooking eggplant thoroughly seems to preclude reactions in some individuals, but at least one of the allergenic proteins survives the cooking process.