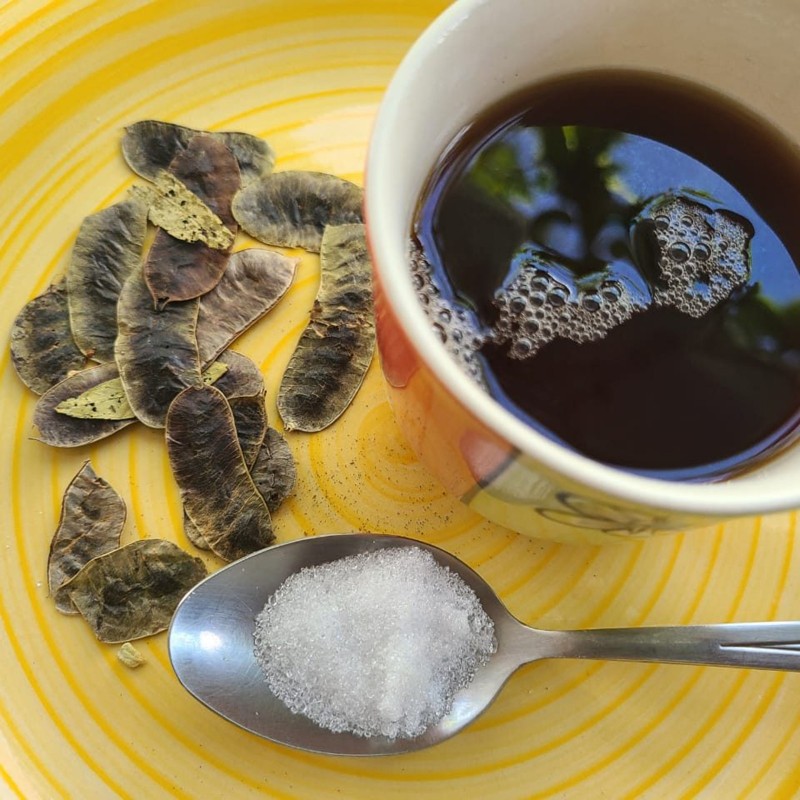 Senna tora (originally described by Linnaeus as Cassia tora) is a plant species in the family Fabaceae and the subfamily Caesalpinioideae. Its name is derived from its Sinhala name tora

Senna tora (originally described by Linnaeus as Cassia tora) is a plant species in the family Fabaceae and the subfamily Caesalpinioideae. Its name is derived from its Sinhala name tora (තෝර). It grows wild in most of the tropics and is considered a weed in many places. Its native range is in Central America. Its most common English name is sickle senna[2] or sickle wild sensitive-plant.[3] Other common names include sickle pod, tora, coffee pod, tovara, chakvad, thakara in Malayalam, and foetid cassia. It is often confused with Chinese senna or sicklepod, Senna obtusifolia.

Senna tora is an herbaceous annual foetid herb. The plant can grow 30–90 centimeters (12–35 in) tall and consists of alternative pinnate leaves with leaflets mostly with three opposite pairs that are obovate in shape with a rounded tip. The leaves grow up to 3–4.5 centimeters long. The stems have distinct smelling foliage when young. The flowers occur in pairs in axils of leaves with five petals and pale yellow in color. The stamens are of unequal length. The pods are somewhat flattened or four-angled, 10–15 cm long, and sickle-shaped, hence the common name sicklepod. There are 30–50 seeds within a pod.

Senna tora is found in many parts of the world. It grows abundantly in parts of Afghanistan, India, Nigeria, China, Pakistan, Myanmar, Nepal and Bhutan. It is also grown and cultivated areas in the Himalayas at an elevation of 1400 meters in Nepal. It is distributed throughout India, Sri Lanka, West China, and the tropics, particularly in forest and tribal areas.

Senna tora is considered an annual weed, is very stress-tolerant, and is easily grown. In India, it occurs as a wasteland rainy season weed and its usual flowering time is after the monsoon rains, during the period of October to February. Senna tora grows in dry soil from sea level up to 1800 meters. The seed can remain viable for up to twenty years. Up to 1000 plants can emerge per square meter following rain. Once the seed has matured, it is gathered and dried in the sun. In South Asia, it usually dies off in the dry season of July–October.

Senna tora has many uses. The whole plant and roots, leaves, and seeds have been widely used in traditional Indian and South Asian medicine. The plant and seeds are edible. Young leaves can be cooked as a vegetable while the roasted seeds are used as a substitute coffee. In Sri Lanka, the flowers are added to food. It is used as a natural pesticide in organic farms, and as a powder commonly used in the pet food industry. It is mixed with guar gum for use in mining and other industrial applications. The seeds and leaves are used to treat skin disease and its seeds can be utilized as a laxative. Senna tora is made into tea. In the Republic of Korea, it is believed to rejuvenate human vision. This tea has been referred to as "coffee-tea", because of its taste and its coffee aroma. Since Senna tora has an external germicide and antiparasitic character, it has been used for treating skin diseases such as leprosy, ringworm, itching, and psoriasis and also for snakebites. Other medicinal provisions from plant parts include balm for arthritis using the leaves. Senna tora is one of the recognized plants that contain the organic compound anthraquinone and is used in Chinese and Ayurvedic medicine. This herb is used in Ayurveda for the treatment of swellings.

Soak the seeds for 2–3 hours in warm water before sowing it from early spring to early summer in a warm greenhouse or pot in your own home. The seed usually germinates in 1–12 weeks at 23°C.
MHS 91 (20 S)
105 Items