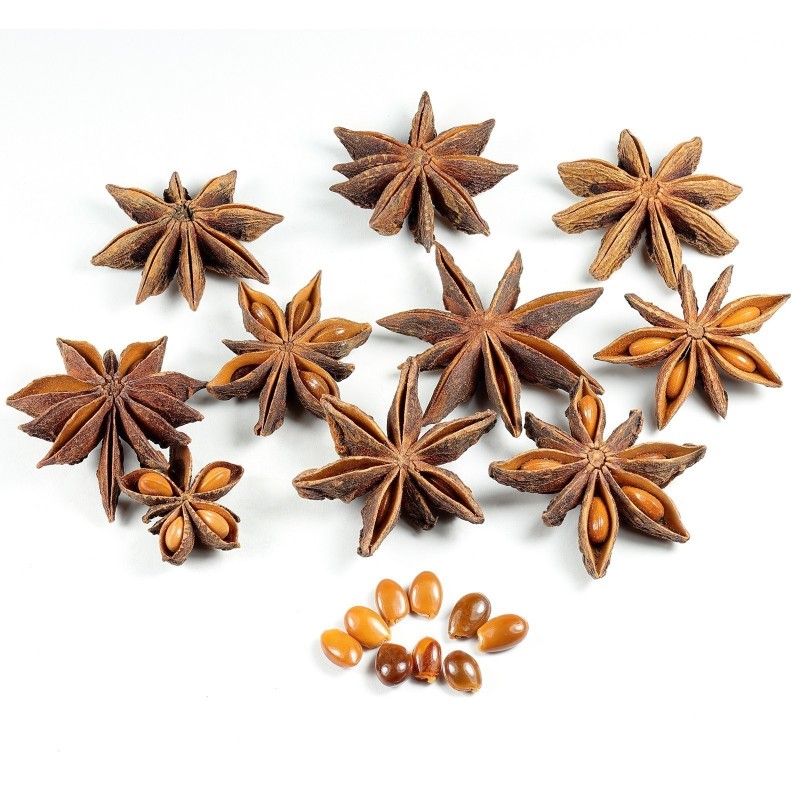 Illicium verum is a medium-sized evergreen tree native to northeast Vietnam and southwest China. A spice commonly called star anise, staranise, star anise seed, Chinese star anise, or badiane that closely resembles anise in flavor is obtained from the star-shaped pericarps of the fruit of I. verum which are harvested just before ripening. Star anise oil is a highly fragrant oil used in cooking, perfumery, soaps, toothpastes, mouthwashes, and skin creams. About 90% of the world's star anise crop is used for extraction of shikimic acid, a chemical intermediate used in the synthesis of oseltamivir (Tamiflu). 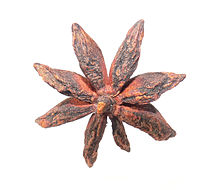 Reverse side of fruit 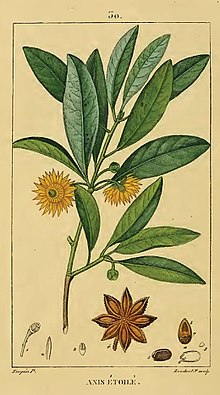 Star anise contains anethole, the same compound that gives the unrelated anise its flavor. Recently, star anise has come into use in the West as a less expensive substitute for anise in baking, as well as in liquor production, most distinctively in the production of the liqueur Galliano.[2] Star anise enhances the flavour of meat.

It is used as a spice in preparation of biryani and masala chai all over the Indian subcontinent. It is widely used in Chinese cuisine, and in Malay and Indonesian cuisines. It is widely grown for commercial use in China, India, and most other countries in Asia. Star anise is an ingredient of the traditional five-spice powder of Chinese cooking. It is also a major ingredient in the making of phở, a Vietnamese noodle soup.

It is also used in the French recipe of mulled wine, called vin chaud (hot wine). If allowed to steep in coffee, it deepens and enriches the flavor. The pods can be used in this manner multiple times by the pot-full or cup, as the ease of extraction of the taste components increases with the permeation of hot water.

Star anise is the major source of the chemical compound shikimic acid, a primary precursor in the pharmaceutical synthesis of the antiinfluenza drug, oseltamivir (Tamiflu).[4][5][6]An industrial method for the production of shikimic acid using fermentation of E. coli bacteria was discovered in 2005,[7][8] and applied in the 2009 swine flu outbreak to address Tamiflu shortages, also causing price increases for star anise as a raw material of shikimic acid.[9] As of 2018, fermentation of E. coli was the manufacturing process of choice to produce shikimic acid for synthesis of Tamiflu.

Japanese star anise (Illicium anisatum), a similar tree, is highly toxic and inedible; in Japan, it has instead been burned as incense. Cases of illness, including "serious neurologicaleffects, such as seizures", reported after using star anise tea, may be a result of deliberate economically motivated adulteration with this species. Japanese star anise contains the neurotoxin anisatin,[10] which also causes severe inflammation of the kidneys (nephritis), urinary tract, and digestive organs when ingested.

Swamp star anise Illicium parviflorum is a similar tree found in the Southern United States, and due to its toxicity, it should not to be used for folk remedies or as a cooking ingredient.

Standardization of its products and services

Differentiation from other species

How to Grow Star Anise From Seeds

Star anise trees (Illicium verum) grow easily from seed. Star anise trees grow in U.S. Department of Agriculture plant hardiness zones 7 through 10 and do best with a soil pH between 4 and 6 that's rich in organic matter. They grow in either full sun or part shade.

Carefully preparing and planting the seeds will give the best chance of success. Or, store the seeds in moist sand in a sealed plastic bag or container in the refrigerator for up to a month.

Pour seed-starting potting mix into 4- to 6-inch-diameter plastic pots. Fill them to 1 to 1 1/2 inches from the top. Moisten the mix with room-temperature water. Use pots that have drainage holes in them.

Place the seeds into a bowl filled with water. Throw away any seeds that float to the surface. They are not viable. Plant only the seeds that sink to the bottom.

Place two or three seeds per pot on top of the moistened potting mix, spaced evenly apart. Cover the seeds with a 1/4 to 1/2 inch of a moistened seed-starting mix. Firm it gently with your fingers to remove air pockets. Set plastic water or soda bottle with the bottom cut out over the seeds. Leave the screw caps on.

Pot the star anise tree seedlings up in individual 6- to 8-inch pots when they are 3 to 4 inches tall. Use pots with drainage holes. Pot them up using peat-based potting soil. Set them in bright, indirect light and water them with room-temperature water when the top of the potting soil begins to dry.

Grow the star anise plants in their containers for one year. Repot them into containers 1 inch larger when they become pot-bound or when you can see the roots through the drain holes in the bottom of the container. Set them outdoors during the day in the summer when there is no danger of frost and the weather is calm and pleasant. Put them in bright shade in an area that is protected from strong winds. Continue to water them when the top of the soil begins to dry.

Plant them outdoors in their permanent positions the following spring after any danger of frost has passed. Begin to get them used to direct sunlight two weeks before planting. Start with an hour of direct morning sunlight and increase the duration by 30 minutes or so every two days. Water them when the top 2 inches of soil feel dry. Plant multiple trees 15 to 20 feet apart. Water them generously right after planting and continue to water them as often as necessary to keep the soil lightly moist.