Variety from Bosnia and Herzegovina
Plant resistant to cold and frost 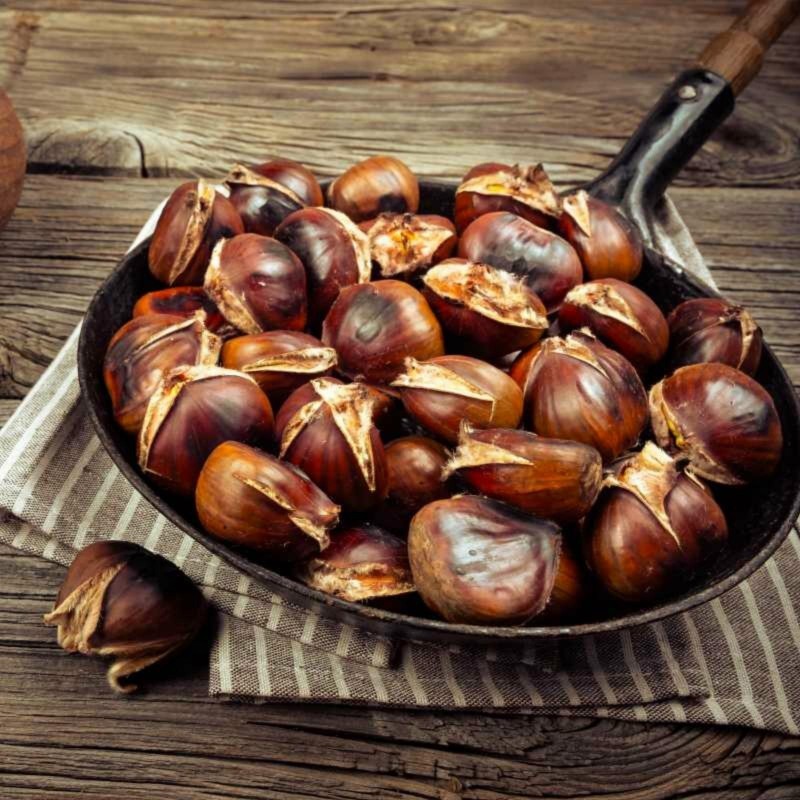 Castanea sativa is a species of a deciduous tree with an edible seed. It is commonly called sweet chestnut and marron. Originally native to southeastern Europe and Asia Minor, it is now widely

Castanea sativa is a species of a deciduous tree with an edible seed. It is commonly called sweet chestnut and marron. Originally native to southeastern Europe and Asia Minor, it is now widely dispersed throughout Europe and in some localities in temperate Asia. The tree is hardy, long-lived and well known for its chestnuts, which are used as an ingredient in cooking.

Castanea sativa is a species of the genus Castanea. The Latin sativa means "cultivated by humans". The tree has been cultivated for its edible nuts since ancient times. It is called chestnut, and sometimes "Spanish chestnut"[2] or "Portuguese chestnut". It is not related to the Horse-chestnut tree.

C. sativa is a medium-sized to large deciduous tree attaining a height of 20–35 m with a trunk often 2 m in diameter. The oblong-lanceolate, boldly toothed leaves are 16–28 cm long and 5–9 cm broad.

The flowers of both sexes are borne in 10–20 cm long, upright catkins, the male flowers in the upper part and female flowers in the lower part. In the northern hemisphere, they appear in late June to July, and by autumn, the female flowers develop into spiny cupules containing 3-7 brownish nuts that are shed during October. The female flowers eventually form a spiky sheath that deters predators from the seed.[3] Some cultivars ('Marron de Lyon', 'Paragon' and some hybrids) produce only one large nut per cupule, rather than the usual two to four nuts of edible, though smaller, size. The bark often has a net-shaped (retiform) pattern with deep furrows or fissures running spirally in both directions up the trunk.

The tree requires a mild climate and adequate moisture for good growth and a good nut harvest. Its year-growth (but not the rest of the tree)[4] is sensitive to late spring and early autumn frosts, and is intolerant of lime. Under forest conditions, it will tolerate moderate shade well.

See also List of Lepidoptera that feed on chestnut trees

The species originated in southern Europe, the Balkans and maybe regions nearby. The use as food and an ornamental tree caused it to be introduced throughout western Europe; localised populations and cultivation also occur on other continents.

The species is widely cultivated for its edible seeds (also called nuts) and for its wood. As early as Roman times, it was introduced into more northerly regions, and later was also cultivated in monastery gardens by monks. Today, centuries-old specimens may be found in Great Britain and the whole of central, western and southern Europe.

The tree was a popular choice for landscaping in England, particularly in the 18th and 19th centuries. C. sativa was probably introduced to the region during the Roman occupation, and many ancient examples are recorded.[3] More recently, the tree has been planted as a street tree in England, and examples can be seen particularly in the London Borough of Islington.

A tree grown from seed may take 20 years or more before it bears fruits, but a grafted cultivar such as 'Marron de Lyon' or 'Paragon' may start production within five years of being planted. Both cultivars bear fruits with a single large kernel, rather than the usual two to four smaller kernels.[4]

The species[5] and the variety C. sativa 'Albomarginata'[6] have both gained the Royal Horticultural Society's Award of Garden Merit.

The raw nuts, with their pithy skin around the seed, are somewhat astringent. That skin can be relatively easily removed by quickly blanching the nuts after having made a cross slit at the tufted end.[7] Once cooked, they are delicious and, when roasted, acquire a sweet flavour and a floury texture not unlike sweet potato. The cooked nuts can be used in confections, puddings, desserts and cakes, or eaten roasted. They are used for flour, bread making, a cereal substitute, coffee substitute, a thickener in soups and other cookery uses, as well as for fattening stock. A sugar can be extracted from it.[4] The Corsican variety of polenta (called pulenta) is made with sweet chestnut flour. A local variety of Corsican beer also uses chestnuts. The product is sold as a sweetened paste mixed with vanilla, crème de marron, sweetened or unsweetened as chestnut purée or purée de marron, and candied chestnuts as marron glacés.[8] In Switzerland, it is often served as Vermicelles.

Roman soldiers were given chestnut porridge before entering battle.[3]

Leaf infusions are used in respiratory diseases and are a popular remedy for whooping cough.[4] A hair shampoo can be made from infusing leaves and fruit husks.[4]

This tree responds very well to coppicing, which is still practised in Britain, and produces a good crop of tannin-rich wood every 12 to 30 years, depending on intended use and local growth rate. The tannin renders the young growing wood durable and resistant to outdoor use, thus suitable for posts, fencing or stakes.[9] The timber of the species is marketed as chestnut. The wood is of light colour, hard and strong. It is also used to make furniture, barrels (sometimes used to age balsamic vinegar), and roof beams notably in southern Europe (for example in houses of the Alpujarra, Spain, in southern France and elsewhere). The timber has a density of 560 kg per cubic meter,[10] and due to its durability in ground contact is often used for external purposes such as fencing.[10] It is also a good fuel, though not favoured for open fires as it tends to spit.[4]