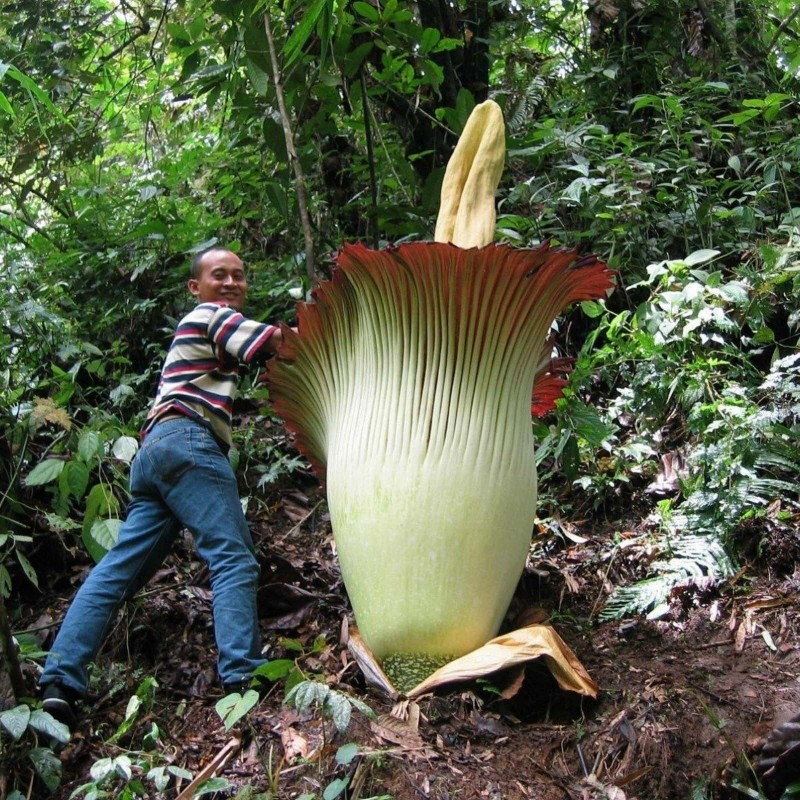 Amorphophallus titanum (from Ancient Greek amorphos, "without form, misshapen" + phallos, "phallus", and titan, "giant"), known as the titan arum, is a flowering plant with the largest unbranched inflorescence

Due to its odor, which is like the smell of a rotting corpse or carcass, the titan arum is characterized as a carrion flower, and is also known as the corpse flower, or corpse plant (Indonesian: bunga bangkai – bunga means flower, while bangkai can be translated as corpse, cadaver, or carrion). For the same reason, the title corpse flower is also attributed to the genus Rafflesia which, like the titan arum, grows in the rainforests of Sumatra, Indonesia and Malaysian Borneo in Sabah and Sarawak.

The titan arum's inflorescence can reach over 3 metres (10 ft) in height. Like the related cuckoo pint and calla lily, it consists of a fragrant spadix of flowers wrapped by a spathe, which looks like a large petal. In the case of the titan arum, the spathe is a deep green on the outside and dark burgundy red on the inside, with a deeply furrowed texture. The spadix is hollow and resembles a large loaf of French bread. Near the bottom of the spadix, hidden from view inside the sheath of the spathe, the spadix bears two rings of small flowers. The upper ring bears the male flowers, the lower ring is spangled with bright red-orange carpels. The "fragrance" of the titan arum resembles rotting meat, attracting carrion-eating beetles and flesh flies (family Sarcophagidae) that pollinate it. The inflorescence's deep red color and texture contribute to the illusion that the spathe is a piece of meat. During bloom, the tip of the spadix is approximately human body temperature, which helps the perfume volatilize; this heat is also believed to assist in the illusion that attracts carcass-eating insects.

After the flower dies back, a single leaf, which reaches the size of a small tree, grows from the underground corm. The leaf grows on a somewhat green stalk that branches into three sections at the top, each containing many leaflets. The leaf structure can reach up to 6 metres (20 ft) tall and 5 metres (16 ft) across. Each year, the old leaf dies and a new one grows in its place. When the corm has stored enough energy, it becomes dormant for about four months. Then, the process repeats.

The corm is the largest known, typically weighing around 50 kilograms (110 lb). When a specimen at the Princess of Wales Conservatory, Kew Gardens, was repotted after its dormant period, the weight was recorded as 91 kilograms (201 lb).[3] In 2006, a corm in the Botanical Garden of Bonn, Germany was recorded at 117 kilograms (258 lb),[4] but the present record is 305 lbs (138.6  kg) for an A. titanum grown in Gilford, New Hampshire by Dr. Louis Ricciardiello in 2010.

The titan arum grows in the wild only in the equatorial rainforests of Sumatra, Indonesia. It was first scientifically described in 1878 by Italian botanist Odoardo Beccari. The plant flowers only infrequently in the wild and even more rarely when cultivated. It first flowered in cultivation at the Royal Botanic Gardens at Kew in London, in 1889, with over 100 cultivated blossoms since then. The first documented flowerings in the United States were at New York Botanical Garden in 1937 and 1939. This flowering also inspired the designation of the titan arum as the official flower of the Bronx in 1939, only to be replaced in 2000 by the day lily. The number of cultivated plants has increased in recent years, and it is not uncommon for there to be five or more flowering events in gardens around the world in a single year. The titan arum is more commonly available to the advanced gardener due to pollination techniques.

The popular name "titan arum" was invented by the broadcaster and naturalist Sir David Attenborough for his BBC series The Private Life of Plants, in which the flowering and pollination of the plant were filmed for the first time. Attenborough felt that constantly referring to the plant as Amorphophallus on a popular TV documentary would be inappropriate.

In 2003, the tallest bloom in cultivation, some 2.74 m (8 ft 11 in) high, was achieved at the Botanical Garden of the University of Bonn in Germany. The event was acknowledged by Guinness World Record.[8] On 20 October 2005, this record was broken at the botanical and zoological garden Wilhelma in Stuttgart, Germany; the bloom reached a height of 2.94 m (9 ft 6 in). The record was broken again by Louis Ricciardiello, whose specimen measured 3.1 m (10 ft 2.25 in) tall on 18 June 2010, when it was on display at Winnipesaukee Orchids in Gilford, New Hampshire, USA. This event, too, was acknowledged by Guinness World Records.

In cultivation, the titan arum generally requires 7–10 years of vegetative growth before blooming for the first time. After its initial blooming, there can be considerable variation in blooming frequency. Some plants may not bloom again for another 7–10 years while others may bloom every two to three years.[11] There have also been documented cases of back-to-back blooms occurring within a year [12] and corms simultaneously sending up both a leaf (or two) and an inflorescence.[13] There has also been an occasion when a corm produced multiple simultaneous blooms.

The spathe generally begins to open between mid-afternoon[15] and late evening and remains open all night. At this time, the female flowers are receptive to pollination. Although most spathes begin to wilt within twelve hours, some have been known to remain open for 24–48 hours. As the spathe wilts, the female flowers lose receptivity to pollination.

Self-pollination is normally considered impossible, but in 1999, Huntington Botanical Garden botanists hand-pollinated their plant with its own pollen from ground-up male flowers. The procedure was successful, resulting in fruit and ten fertile seeds from which several seedlings eventually were produced.[16] Additionally, a titan arum at Gustavus Adolphus College unexpectedly produced viable seed through self-pollination in 2011.

As the spathe gradually opens, the spadix releases powerful odors to attract pollinators, insects which feed on dead animals or lay their eggs in rotting meat. The potency of the odor (aroma) gradually increases from late evening until the middle of the night, when carrion beetles and flesh flies are active as pollinators, then tapers off towards morning.[18] Analyses of chemicals released by the spadix show the “stench” includes dimethyl trisulfide (like limburger cheese), dimethyl disulfide, trimethylamine (rotting fish), isovaleric acid (sweaty socks), benzyl alcohol (sweet floral scent), phenol (like Chloraseptic), and indole (like human feces).