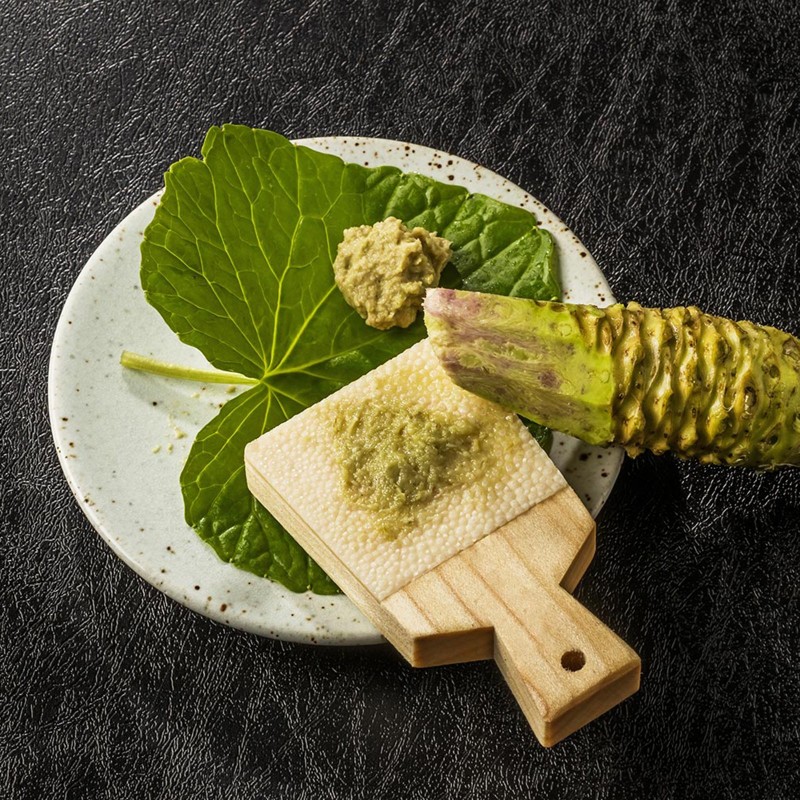 Wasabi earlier Eutrema japonicum or Wasabia japonica is a plant of the Brassicaceae family, which includes cabbages, horseradish, and mustard. It is also called Japanese horseradish, although horseradish

Wasabi earlier Eutrema japonicum or Wasabia japonica is a plant of the Brassicaceae family, which includes cabbages, horseradish, and mustard. It is also called Japanese horseradish, although horseradish is a different plant (which is generally used as a substitute for wasabi, due to the scarcity of the wasabi plant). Its stem is used as a condiment and has an extremely strong pungency more akin to hot mustard than the capsaicin in a chili pepper, producing vapours that stimulate the nasal passages more than the tongue. The plant grows naturally along stream beds in mountain river valleys in Japan. The two main cultivars in the marketplace are E. japonicum 'Daruma' and 'Mazuma', but there are many others.  The origin of wasabi cuisine has been clarified from the oldest historical records; it takes its rise in Nara prefecture.

Wasabi is generally sold either as a stem, which must be very finely grated before use, as dried powder in large quantities, or as a ready-to-use paste in tubes similar to travel toothpaste tubes. Because it grows mostly submerged, it is a common misconception to refer to the part used for wasabi as a root or sometimes even a rhizome: it is in fact the stem[6][7] of the plant, with the characteristic leaf scar where old leaves fell off or were collected.

In sushi preparation, sushi chefs usually put the wasabi between the fish and the rice because covering wasabi until served preserves its flavor.

Fresh wasabi leaves can be eaten, having the spicy flavor of wasabi stems.

Legumes (peanuts, soybeans, or peas) may be roasted or fried, then coated with wasabi powder mixed with sugar, salt, or oil and eaten as a crunchy snack.

Wasabi favours growing conditions which restricts its wide cultivation. The resulting inability to be cultivated like other crops in order to fully satisfy commercial demand, thus makes it quite expensive.  Therefore, outside Japan, it is rare to find real wasabi plants. Due to its high cost, a common substitute is a mixture of horseradish, mustard, starch and green food coloring or spinach powder. Often packages are labeled as wasabi while the ingredients do not actually include wasabi plant. Wasabi and horseradish are similar in taste and pungency due to similar isothiocyanate levels.

The primary difference between the two is color with Wasabi being naturally green. In Japan, horseradish is referred to as seiyō wasabi (西洋わさび?, "western wasabi").

In the United States, true wasabi is generally found only at specialty grocers and high-end restaurants.

The chemical in wasabi that provides for its initial pungency is the volatile allyl isothiocyanate, which is produced by hydrolysis of natural thioglucosides (conjugates of the sugar glucose, and sulfur-containing organic compounds); the hydrolysis reaction is catalyzed by myrosinase and occurs when the enzyme is released on cell rupture caused by maceration – e.g., grating – of the plant.[16][17][18] The same compound is responsible for the pungency of horseradish and mustard. Allyl isothiocyanate can also be released when the wasabi plants have been damaged, because it is being used as a defense mechanism.

The unique flavor of wasabi is a result of complex chemical mixtures from the broken cells of the plant, including those resulting from the hydrolysis of thioglucosides into glucose and methylthioalkyl isothiocyanates:

Research has shown that such isothiocyanates inhibit microbe growth, perhaps with implications for preserving food against spoilage and suppressing oral bacterial growth.

Because the burning sensations of wasabi are not oil-based, they are short-lived compared to the effects of chili peppers, and are washed away with more food or liquid. The sensation is felt primarily in the nasal passage and can be quite painful depending on the amount consumed. Inhaling or sniffing wasabi vapor has an effect like smelling salts, a property exploited by researchers attempting to create a smoke alarm for the deaf. One deaf subject participating in a test of the prototype awoke within 10 seconds of wasabi vapor sprayed into his sleeping chamber.[21] The 2011 Ig Nobel Prize in Chemistry was awarded to the researchers for determining the ideal density of airborne wasabi to wake people in the event of an emergency.

Wasabi is often grated with a metal oroshigane, but some prefer to use a more traditional tool made of dried sharkskin with fine skin on one side and coarse skin on the other. A hand-made grater with irregular teeth can also be used. If a shark-skin grater is unavailable, ceramic is usually preferred.

The two kanji characters "山" and "葵" do not correspond to their pronunciation: as such it is an example of gikun (meaning, not sound). The two characters actually refer to the mountain Asarum, as the plant's leaves resemble those of a member of Asarum species, in addition to its ability to grow on shady hillsides. The word, in the form 和佐比, appeared in 918 in The Japanese Names of Medical Herbs (本草和名 Honzō Wamyō). Spelled in this way, the particular kanji are used for their phonetic values only, known as ateji (sound, not meaning – opposite of gikun).

Dear customers, please note you can not buy Wasabi seeds from China. All of china sellers will send you normal mustard seeds or some kind of other seeds. You can see now in our pictures how do real Wasabi seeds look like.

I was satisfied with the package, thank You, but can You be so kind to send me advice how to plant the seeds to have a godd crops.(like soil, ph, sunny, shade place) You can send me on this mail. Thank You for Your kindness. Sincerelly Sinja