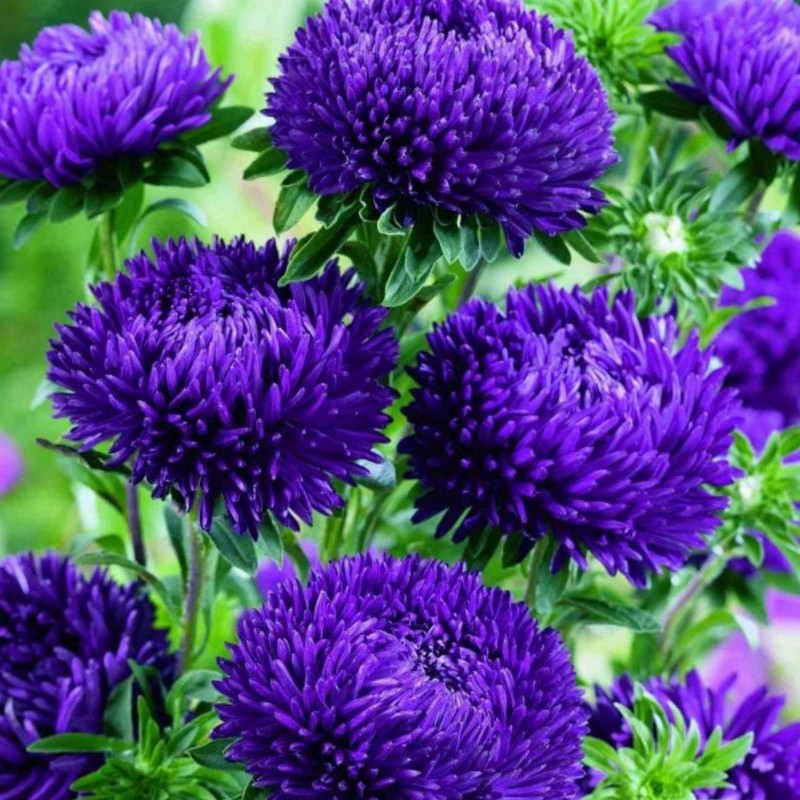 Gremlin is a tall double variety of aster which makes excellent, long lasting cut flowers grown from flower seeds. Sow these flower seeds in well-drained soil in a sunny spot. This dark violet aster has twisted

Gremlin is a tall double variety of aster which makes excellent, long lasting cut flowers grown from flower seeds. Sow these flower seeds in well-drained soil in a sunny spot. This dark violet aster has twisted petals which are said to resemble a "tiger's paw" and is often referred to as Tiger Paw Aster or Krallenaster. The Gremlin aster is an extremely late cut flower with huge flowers with curved and quilled petals. This aster, when grown from flower seed, has an upright growth habit reaching nearly 30 inches in height.
Sowing:
Sow indoors 6 to 8 weeks before the last frost date, or sow directly where they are to flower once the soil has warmed. For a continuous show, you may wish to plant stagger the sowing dates. The seed may also be direct sown in April to May where the plants are to flower, but in this case flowering will start later. A sunny situation should be chosen for the aster bed, which should be prepared as soon as possible, making sure that drainage is good.
Sowing Indoors  March to April
March and April sowing should be made in gentle heat, sowing into trays of compost, “Just cover” the seeds with a sprinkling of compost or vermiculite.
When large enough to handle, transplant seedlings into 7.5cm (3in) pots or trays. Handle the plants with care and avoid disturbing the roots as much as possible when transplanting to prevent wilting.
Gradually hardened off for 10 to 14 days before transplanting into the flowering site in early May. Light spring frosts will not harm the plants.
Plant 25 -40cm (10 to 16in) apart.
Direct Sowing   April to May
Sow thinly, 6mm (1/4in) deep in small clumps or shallow drills. Sow 30cm (12in) apart in well-cultivated soil which has been raked to a fine tilth. Water ground regularly, especially in dry periods.
When large enough to handle, thin out seedlings until they are finally 30cm (12in) apart in spring
Outside sowings should be gradually thinned to the same spacings when the seedlings are large enough to handle.
Cultivation:
Flowers should be removed as soon as they have faded to promote the growth of further blooms. Never over water, but do not let the soil dry out.
Preventive measures should be taken against aphids.
Cut flowers will last 8 to 10 days in water. Cut when flowers are half-open; recut stems underwater.
Plant Uses:
Cut Flowers, Flowers Borders and Beds, Patio and Container Plants
Note:
Plants must not be planted in the same ground two years in a row to avoid Fusarium Wilt - a soil-borne disease that has plagued Asters in the past.
Nomenclature:
The name Aster comes from the Ancient Greek word astron, meaning "star", arriving through the Latin word astrum with the same meaning, referring to the shape of the flower head.
The genus name Callistephus (pronounced ka-LIS-te-fus) is derived from the Greek words “kallos” (meaning beautiful) and “stephanus” (meaning crown).
F 22
9975 Öğeler