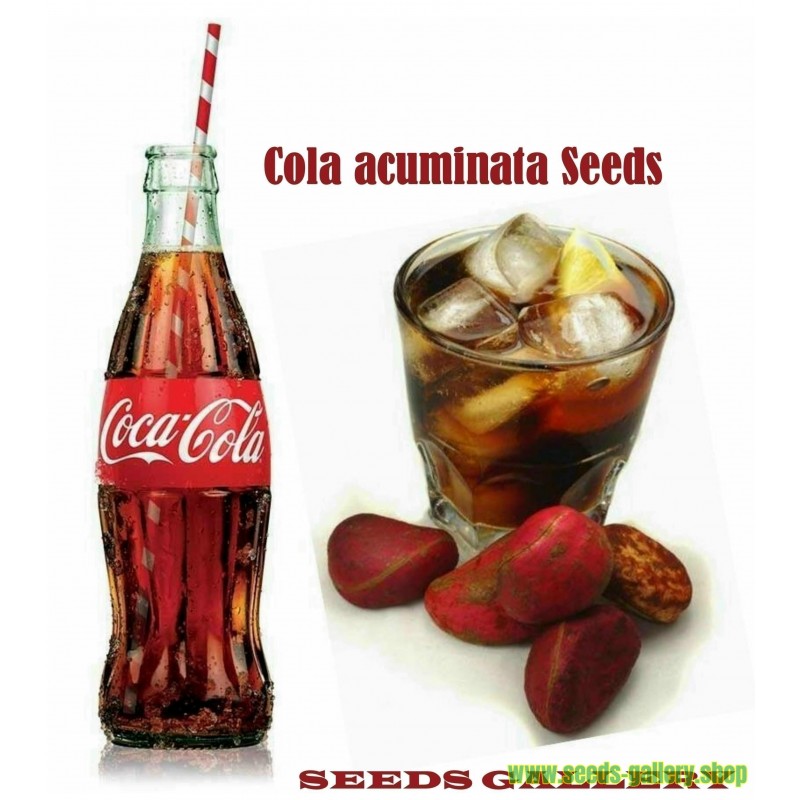 The kola nut is the fruit of the kola tree, a genus (Cola) of trees that are native to the tropical rainforests of Africa. The caffeine-containing fruit of the tree is used as a flavoring ingredient in beverages, and is the origin of the term "cola".

The kola nut is a caffeine-containing nut of evergreen trees of the genus Cola, primarily

The kola nut is the fruit of the kola tree, a genus (Cola) of trees that are native to the tropical rainforests of Africa. The caffeine-containing fruit of the tree is used as a flavoring ingredient in beverages, and is the origin of the term "cola".

The kola nut is a caffeine-containing nut of evergreen trees of the genus Cola, primarily of the species Cola acuminata and Cola nitida.[1] Cola acuminata, an evergreen tree about 20 metres in height, has long, ovoid leaves pointed at both the ends with a leathery texture. The trees have yellow flowers with purple spots, and star-shaped fruit. Inside the fruit, about a dozen round or square seeds develop in a white seed-shell. The nut’s aroma is sweet and rose-like. The first taste is bitter, but it sweetens upon chewing. The nut can be boiled to extract the cola. This tree reaches 25 meters in height and is propagated through seeds. C. nitida and C. acuminata can easily be interchanged with other Cola species.

Kola nuts comprise about 2% caffeine, as well as containing kolanin and theobromine. All three chemicals function as stimulants.

The kola nut has a bitter flavor and contains caffeine. It is chewed in many West African cultures, individually or in a group setting. It is often used ceremonially, presented to chiefs or presented to guests.

Kola nuts are perhaps best known to Western culture as a flavoring ingredient and one of the sources of caffeine in cola and other similarly flavored beverages, although the use of kola (or kola flavoring) in commercial cola drinks has become uncommon

Human use of the kola nut, like the coffee berry and tea leaf, appears to have ancient origins. It is chewed in many West African cultures, individually or in a social setting, to restore vitality.

Kola nuts are an important part of the traditional spiritual practice of culture and religion in West Africa, particularly Niger, Nigeria and Liberia.[5] The 1970s hit "Goro City", by Manu Dibango, highlights the significance of kola nuts (called "goro" in the Hausa language)[6] to the capital of Niger, Niamey. Kola nuts are used as a religious object and sacred offering during prayers, ancestor veneration, and significant life events, such as naming ceremonies, weddings, and funerals. They are also used in a traditional divination system called Obi divination. For this use, only kola nuts divided into four lobes are suitable. They are cast upon a special wooden board and the resulting patterns are read by a trained diviner. This ancient practice is currently enjoying increased growth within the United States and Caribbean.

They were used as a form of currency in some West African people groups such as the Malinke and Bambara of Mali and Senegal. They are still used as such today in certain situations such as in negotiation over bride prices or as a form of a respect or host gift to the elders of a village should one move to a village or enter a business arrangement with the village.

In the 1800s, a pharmacist in Georgia, John Pemberton, took extracts of kola and coca and mixed them with sugar, other ingredients, and carbonated water to invent the first cola soft drink. His accountant tasted it and called it "Coca-Cola". Cocaine (not the other extracts from the Peruvian coca leaf) was prohibited from soft drinks in the U.S. after 1904, and Coca-Cola no longer uses either kola or coca in its original recipe.

Originally a tree of tropical rainforest, it needs a hot humid climate, but can withstand a dry season on sites with a high ground water level. It may be cultivated in drier areas where ground water is available. C. nitida is a shade bearer, but develops a better spreading crown which yields more fruits in open places. Though it is a lowland forest tree, it has been found at altitudes over 300 m on deep, rich soils under heavy and evenly distributed rainfall.

Regular weeding is a must and can either be done manually or by using herbicides. Some irrigation can be provided to the plants, but it is important to remove the water through an effective drainage system, as excess water may prove to be detrimental for the growth of the plant. When not grown in adequate shade, the kola nut plant responds well to fertilizers. Usually, the plants need to be provided with windbreaks to protect them from strong gales.

Kola nuts can be harvested mechanically or by hand, by plucking them at the tree branch. When kept in a cool, dry place, kola nuts can be stored for a long time.

The nuts are subject to attack by the kola weevil Balanogastris cola. The larvae of the moth Characoma strictigrapta that also attacks cacao bore into the nuts. Traders sometimes apply an extract of the bark of Rauvolfia vomitoria or the pulverised fruits of Xylopia and Capsicum to counteract the attack on nursery plants. The cacao pests Sahlbergella spp. have been found also on C. nitida as an alternative host plant. While seeds are liable to worm attack, the wood is subject to borer attack.