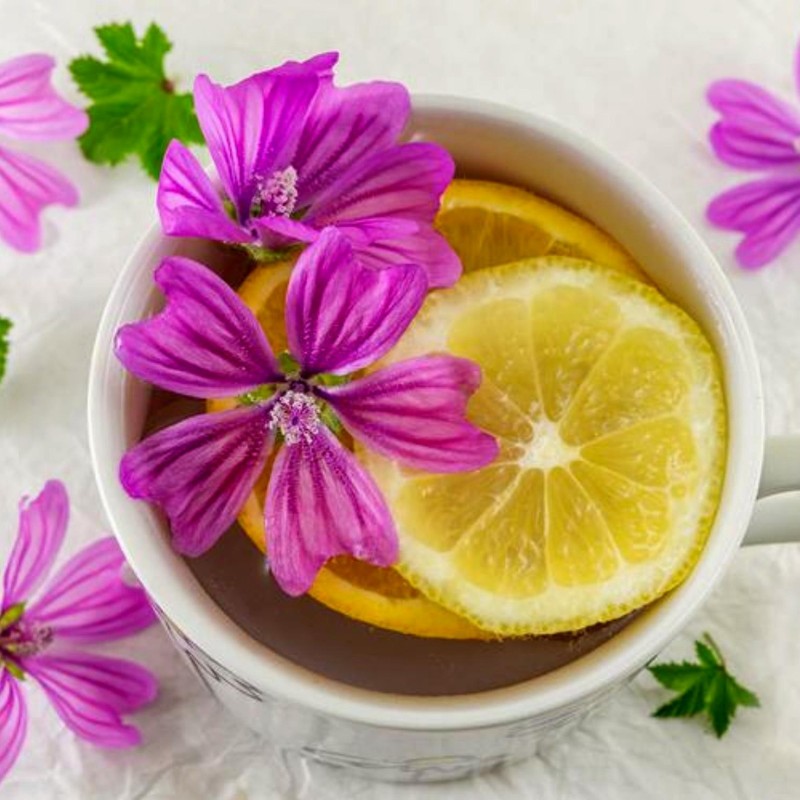 Malva sylvestris is a species of the mallow genus Malva in the family of Malvaceae and is considered to be the type species for the genus. Known as common mallow to English speaking Europeans, it acquired the

Malva sylvestris is a species of the mallow genus Malva in the family of Malvaceae and is considered to be the type species for the genus. Known as common mallow to English speaking Europeans, it acquired the common names of cheeses, high mallow and tall mallow (mauve des bois by the French) as it migrated from its native home in Western Europe, North Africa and Asia through the English speaking world. M. sylvestris is a vigorously healthy plant with showy flowers of bright mauve-purple, with dark veins; a handsome plant, often standing 3 or 4 feet (1 m) high and growing freely in fields, hedgerows and in fallow fields.

Malva sylvestris is a spreading herb, which is an annual in North Africa, biennial in the Mediterranean and a perennial elsewhere Three feet (one meter) tall, (3 meters has been observed in a wild or escaped from cultivation setting, and several cultivated plants of 2 meter or more in height) with a growth habit which can be straight or decumbent, branched and covered with fine soft hairs or none at all, M. sylvestris is pleasing in appearance when it first starts to flower, but as the summer advances, "the leaves lose their deep green color and the stems assume a ragged appearance".[

Stems and leaves: A thick, round and strong stem.

Described as reddish-purple,[8] bright pinkish-purple with dark stripes[3] and bright mauve-purple,[6] the flowers of Malva sylvestris appear in axillary clusters[12] of 2 to 4[5] and form irregularly and elongated along the main stem with the flowers at the base opening first.

Petals are wrinkly to veined on the backs,[8] more than 20 millimeters long[3] or 15 to 25 millimeters long [12] and 1 centimeter wide,[5] eggshaped, margin notched with a fringe of hairlike projections.

Seeds or 'cheeses,'[6] are brown to brownish green when ripe, about 2.5 millimeters long and wide 5 to 7 millimeters in diameter and are shaped like a cheese wheel which is where several of its common names came from.

As a native Malva sylvestris spreads itself on waste and rough ground, by roads and railways throughout lowland England, Wales and Channel Islands, Siberia and scattered elsewhere.[3][8] It has been introduced to and has become naturalized in eastern Australia,[12] in the United States, Canada and Mexico probably escaped from cultivation.

In 1931 Maud Grieve wrote that the "use of this species of Mallow has been much superseded by Marsh Mallow (Althaea officinalis), which possesses its valuable properties in a superior degree, but it is still a favorite remedy with country people where Marsh Mallow is not obtainable."

In the past, the flowers were spread on doorways and woven into garlands or chaplets for celebrating May Day.

The young leaves, when boiled, is a wholesome vegetable[6] and was eaten in several parts of Europe in the 19th century.

M. sylvastris has been used medicinally since ancient times and is still used in modern phytotherapy. Mucilage is present in many of the Malvaceae family including M. Sylvastris, especially the fruit. The seeds are used internally in a decoction or herbal tea as a demulcent and diuretic, and the leaves made into poultices as an emollient for external applications. Mallow can also be taken internally for its laxative effect.

The species has long been used as a natural yellow dye,[22] perhaps more recently, cream color, yellow and green dyes can be obtained from the plant and the seeds.[23] A tincture of the flowers can make a very sensitive test for alkalis.

It is often grown as an ornamental plant for its attractive flowers, produced for a long period through the summer. Numerous cultivars have been selected and named.