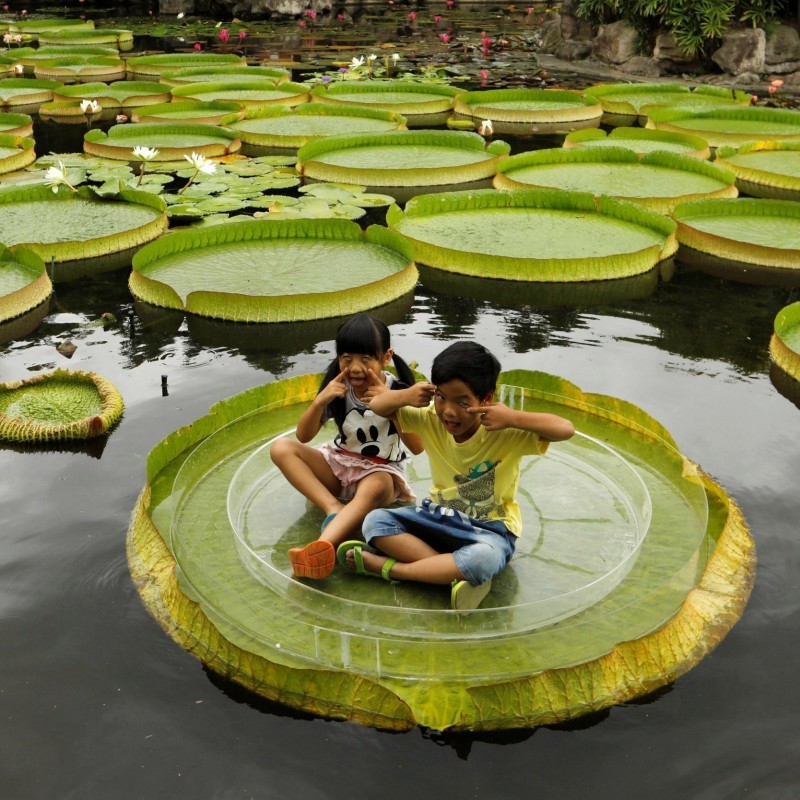 Queen of the water lilies, this Amazonian giant has a remarkable life cycle. Victoria Amazonica is well known for its huge circular leaves, which are often pictured with a small child sitting supported in the

Queen of the water lilies, this Amazonian giant has a remarkable life cycle.

Victoria Amazonica is well known for its huge circular leaves, which are often pictured with a small child sitting supported in the centre as a demonstration of their size and strength. The species is highly prized as an ornamental, despite having somewhat particular requirements for successful cultivation.

Victoria Amazonica seeds from Thailand that have a perfectly can grow every weather that have a very big size most 3.5 metre. The seeds very fresh easy for grow the most quality 85%. Every seeds had quality cue in with thoroughly.

How To Grow Victoria amazonica Seeds

Put the seeds in to washtub and wait 5 weeks.

When the roots thrown out and flowers thrive then after that put the underground and wait for until the lotus grow up.

Victoria amazonica is a species of flowering plant, the largest of the Nymphaeaceae family of water lilies. It is the National flower of Guyana.

The species has very large leaves, up to 3 m in diameter, that float on the water's surface on a submerged stalk, 7–8 m in length. The species was once called Victoria regia after Queen Victoria, but the name was superseded. V. amazonica is native to the shallow waters of the Amazon River basin, such as oxbow lakes and bayous. It is depicted in the Guyanese coat of arms. The flowers are white the first night they are open and become pink the second night. They are up to 40 cm in diameter, and are pollinated by beetles. This process was described in detail by Sir Ghillean Prance and Jorge Arius.[4][5]It is the largest waterlily in the world.

A member of the genus Victoria placed in the Nymphaeaceae family or, sometimes, in the Euryalaceae.[6] The first published description of the genus was by John Lindley in October 1837, based on specimens of this plant returned from British Guiana by Robert Schomburgk. Lindley named the genus after the newly ascended Queen Victoria, and the species Victoria regia.[1] The spelling in Schomburgk's description in Athenaeum, published the month before, was given as Victoria Regina.[2] Despite this spelling being adopted by the Botanical Society of London for their new emblem, Lindley's was the version used throughout the nineteenth century.

An earlier account of the species, Euryale amazonica by Eduard Friedrich Poeppig, in 1832 described an affinity with Euryale ferox. A collection and description was also made by the French botanist Aimé Bonpland in 1825.[1][1][8] In 1850 James De Carle Sowerby[9] recognised Poeppig's earlier description and transferred its epithet amazonica. The new name was rejected by Lindley. The current name, Victoria amazonica, did not come into widespread use until the twentieth century.

Victoria regia, as it was named, was discovered by Tadeáš Haenke in 1801.[10] It was once the subject of rivalry between Victorian gardeners in England. Always on the look out for a spectacular new species with which to impress their peers, Victorian "Gardeners"[11] such as the Duke of Devonshire, and the Duke of Northumberland started a well-mannered competition to become the first to cultivate and bring to flower this enormous lily. In the end, the two aforementioned Dukes became the first to achieve this, Joseph Paxton (for the Duke of Devonshire) being the first in November 1849 by replicating the lily's warm swampy habitat (not easy in winter in England with only coal-fired boilers for heating), and a "Mr Ivison" the second and more constantly successful (for Northumberland) at Syon House.

The species captured the imagination of the public, and was the subject of several dedicated monographs. The botanical illustrations of cultivated specimens in Fitch and W.J. Hooker's 1851 work Victoria Regia[12] received critical acclaim in the Athenaeum, "they are accurate, and they are beautiful".[13] The Duke of Devonshire presented Queen Victoria with one of the first of these flowers, and named it in her honour. The lily, with ribbed undersurface and leaves veining "like transverse girders and supports", was Paxton's inspiration for The Crystal Palace, a building four times the size of St. Peter's in Rome.