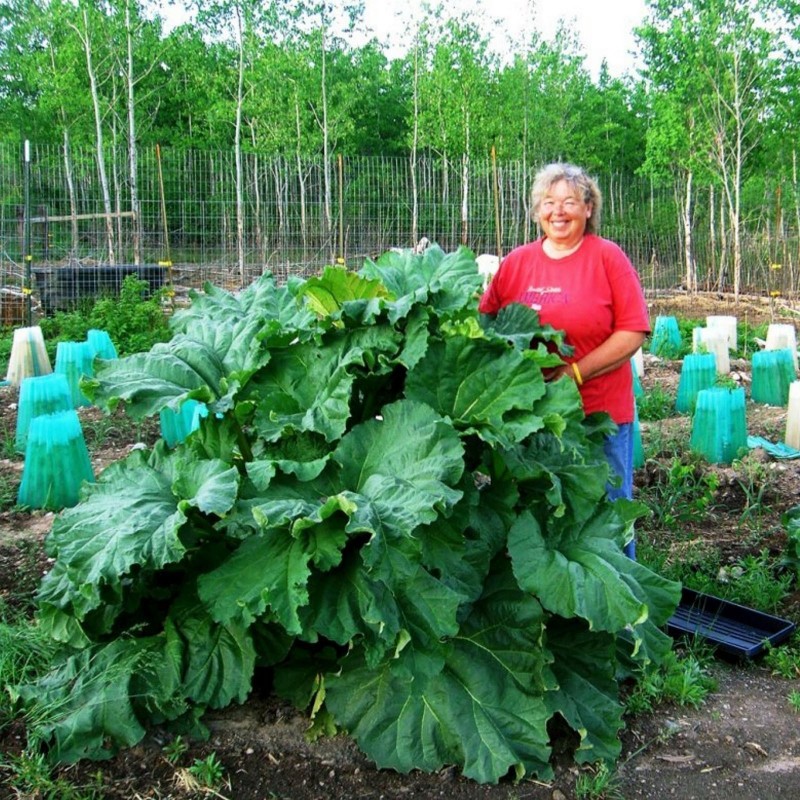 Classified as a vegetable, Rhubarb makes the sweetest pies! Rhubarb is a perennial plant with edible stalks that have a strong, tart flavor. Native to Asia, which was used medicinally by the ancient Mongolians and Chinese, Rhubarb's use as a food is fairly recent. It began to be eaten in seventeenth-century England after the introduction of sugar. Sweetened with sugar, it is used for pies, jams, and sauces that go well with meat dishes.

Although Rhubarb loves consistent moisture and well-drained fertile soil, it is extremely hardy and vigorous, requiring minimal care once established. Rhubarb is well known for its pies but it is also a beautiful plant. The huge-leafed plants can be 3 to 5 feet wide with 5 to 6 feet flower stalks. Rhubarb can live for 10 to 15 years or more when treated well.

Note: Only stalks are edible.

Rhubarb is a cool-season crop that requires temperatures below 40°F to break dormancy and to stimulate good spring growth.  For growth to remain vigorous, summer temperatures should average less than 75°F. This means that the Northern U.S. and Canada are best suited for rhubarb production.

Uses Pies, jams, and sauces. Victoria rhubarb has slender, red to green stalks with a sweeter flavor than other varieties. Only eat the stalks. The leaves are poisonous. Chopped rhubarb can be frozen in Ziploc bags for use in the winter.

Harvest/Storage It is best to wait until the second year before harvesting stalks and even then, be conservative. Pull the stalks instead of cutting. Remove flower stalks as soon as you see them.  You will not get full harvests until the third year. Rhubarb plants will be productive for fifteen years or longer.

Harvest for 6-8 weeks from mid-spring to early summer. Harvest only the biggest stalks and don’t remove more than half in one year. Stop harvesting completely by mid-summer. As the leaves are poisonous, remove them before cooking the stalks. Every 4 to 5 years dig up and divide your plants to avoid over-crowded and stunted plants.

Sow indoors 6 weeks before the last frost date, 1/4 to 1/2" deep. After hardening off, transplant into deeply cultivated, well-drained beds into which generous amounts of organic matter and composted manure have been added. Space plants 18-24" apart. Begin harvesting in the second year.