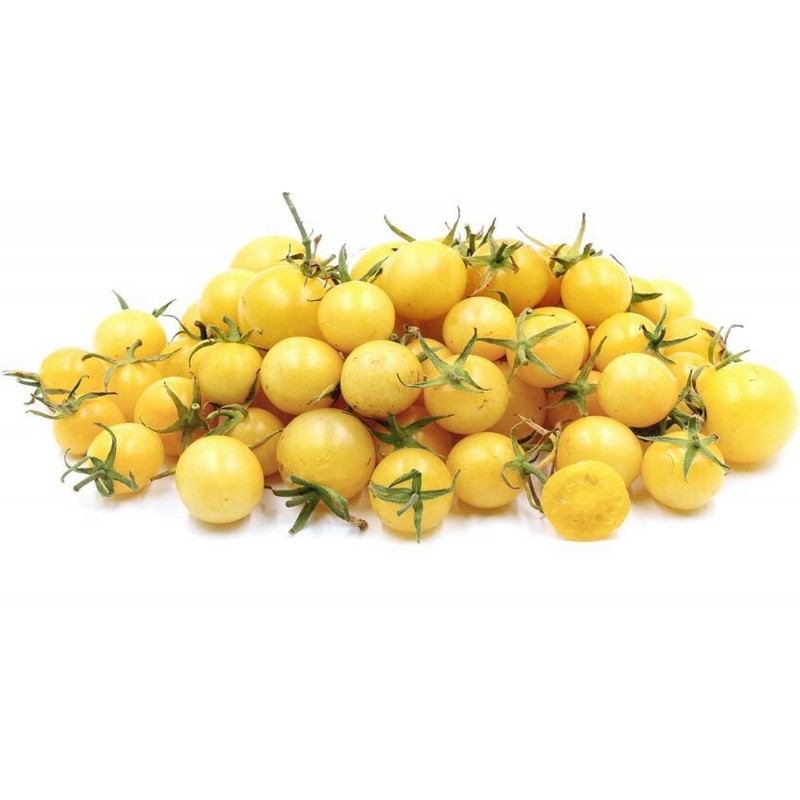 Snow White tomatoes are a medium-large sized variety of cherry tomato weighing approximately 20-30 grams (one to two ounces) per fruit. They ripen (in 80 days) from green

Snow White tomatoes are a medium-large sized variety of cherry tomato weighing approximately 20-30 grams (one to two ounces) per fruit. They ripen (in 80 days) from green to a pale yellow, and that ivory-cream color persists throughout the interior flesh. They are deliciously sweet and juicy without being sugary, and notes of citrus and pineapple balance their flavor. The compact indeterminate plants grow an average of four to 180 cm (six feet) tall and are highly productive throughout the season.

Snow White cherry tomatoes are a variety of Solanum lycopersicum in the Nightshade family. Tomatoes are categorized in subgroups that represent variations observed within the tomato species, referred to as their cultivar: a botanical term that is a contraction of the two-word term cultivated variety, and is equivalent to what growers simply call a “variety.” Therefore, Cherry tomato varieties are more specifically called Lycopersicon esculentum var. cerasiforme. Their pale color earned them their name, which is appropriately pure and sweet although they actually turn more of a creamy yellow color when fully mature. They offer far more of a concentrated tomato flavor than most other white varieties.

Nutritional Value
Tomatoes are rich in vitamin C, and they contain good amounts of vitamin B and vitamin A. They are a good source of iron and calcium, and also contain decent amounts of phosphorus, sulfur, and potassium.

Applications
Snow White cherry tomatoes are great for snacking or as an addition to fresh salads. They are sweet and delicious on their own, but can also be enhanced by fresh herbs and spices, such as basil, cilantro, chives, dill, garlic, mint, paprika, rosemary, oregano, parsley, thyme, and tarragon. Store tomatoes at room temperature until ripe, after which refrigeration can slow the process of decay.

Ethnic/Cultural Info
Cherry tomatoes were the first tomato species to be domesticated. They are descendants of the wild tomato, which traces back millions of years the coastal regions of South America. However, archeological evidence suggests that cherry tomatoes were first cultivated further north in Central America by the Aztecs and Incas as early as 700 AD. The tomato was introduced to Spain in the 16th century by the conquistadors and soon spread throughout Europe, however, it wasn’t until the mid-1800’s that the tomato became widespread in the United States.

Geography/History
The Snow White cherry tomato was developed by Joe Bratka, a famous tomato collector from New Jersey who has bred several other varieties including the popular isis candy cherry tomato. Tomatoes are warm-weather plants that are not at all hardy, as cold soil and air temperatures can stress plants. It is recommended that you wait at least a week or two after the last frost of the season before planting outdoors.