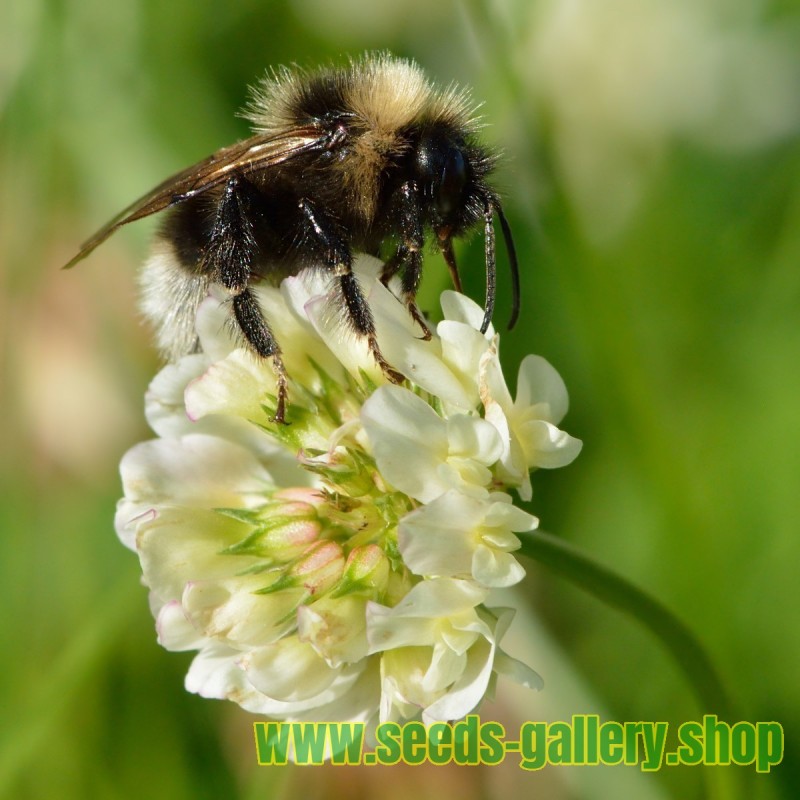 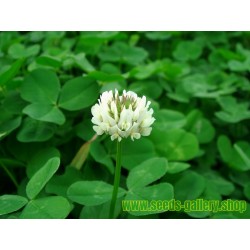 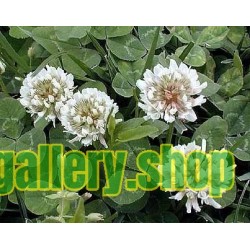 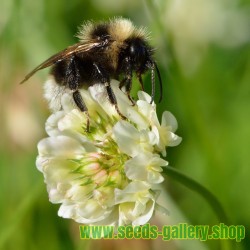 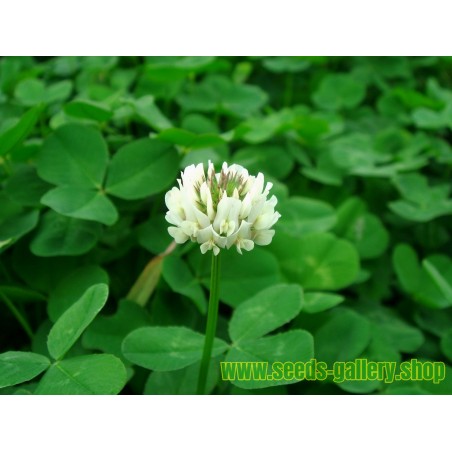 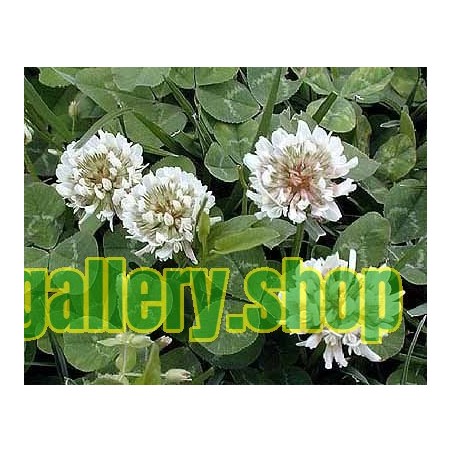 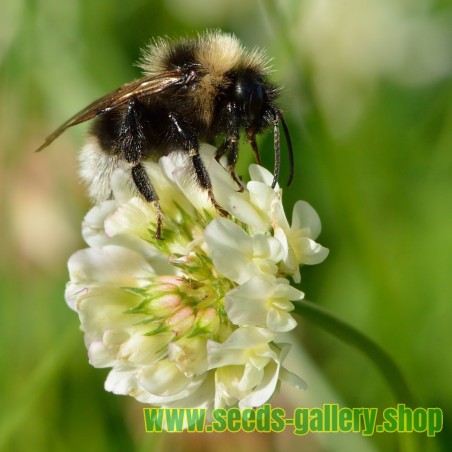 Price for Package of 100 grams.

Seeds per gram 1400, about  140.000 seeds. Trifolium repens, the white clover (also known as Dutch clover, Ladino clover, or Ladino), is a herbaceous perennial plant in the bean family

Price for Package of 100 grams.

Seeds per gram 1400, about  140.000 seeds. Trifolium repens, the white clover (also known as Dutch clover, Ladino clover, or Ladino), is a herbaceous perennial plant in the bean family Fabaceae. It is native to Europe and central Asia. One of the most widely cultivated types of clover, it has been widely introduced worldwide as a forage crop, and is now also common in most grassy areas (lawns and gardens) of North America and New Zealand. The species includes varieties often classed as small, intermediate and large, according to height, which reflects petiole length. The term “white clover” is applied to the species in general, “Dutch clover” is often applied to intermediate varieties (but sometimes to smaller varieties), and “ladino clover” is applied to large varieties.

It is a herbaceous, perennial plant. It is low growing, with heads of whitish flowers, often with a tinge of pink or cream that may come on with the aging of the plant. The heads are generally 1.5–2 centimetres (0.6–0.8 in) wide, and are at the end of 7-cm (2.8-in) peduncles or flower stalks.[14] The flowers are mostly visited by bumblebees[15] and often by honey bees. The leaves, are trifoliolate, smooth, elliptic to egg-shaped and long-petioled and usually with light or dark markings. The stems function as stolons, so white clover often forms mats, with the stems creeping as much as 18 cm (7.1 in) a year, and rooting at the nodes. The leaves form the symbol known as shamrock.

The genus name, Trifolium, derives from the Latin tres, "three", and folium, "leaf", so called from the characteristic form of the leaf, which usually but not always has three leaflets (trifoliate); hence the popular name "trefoil". The species name, repens, is Latin for "creeping".

White clover has been described as the most important forage legume of the temperate zones.[16] Symbiotic nitrogen fixation (up to 545 kg N per hectare per year,[17] although usually much less, e.g. about 110 to 170 kg N per hectare per year[18]) in root nodules of white clover obviates synthetic nitrogen fertilizer use for maintaining productivity on much temperate zone pasture land. White clover is commonly grown in mixtures with forage grasses, e.g. perennial ryegrass (Lolium perenne),[19][20][21] Such mixtures can not only optimize livestock production, but can also reduce the bloat risk to livestock that can be associated with excessive white clover in pastures.[22] Such species mixtures also tend to avoid issues that could otherwise be associated with cyanogenic glycoside (linamarin and lotaustralin) intake on pure or nearly pure stands of some white clover varieties.[23] However, problems do not inevitably arise with grazing on monocultures of white clover, and superior ruminant production is sometimes achieved on white clover monocultures managed to optimize sward height.[24] Formononetin and biochanin A play a role in arbuscular mycorrhiza formation on white clover roots,[25] and foliar disease can stimulate production of estrogenic coumestans in white clover.[26] However while there have been a few reports of phytoestrogenic effects of white clover on grazing ruminants,[26] these have been far less common than such reports regarding some varieties of subterranean and red clover. Among forage plants, some white clover varieties tend to be favored by rather close grazing, because of their stoloniferous habit, which can contribute to competitive advantage. T. repens is also considered as a folk medicine in India against intesinal helminthic worms and an experimental in vivo study validated that the aerial shoots of T. repens bear significant anticestodal properties.

White clover grows well as a companion plant among turf grasses, grain crops, pasture grasses, and vegetable rows.[14] White clover can tolerate close mowing and grazing, and it can grow on many different types and pHs of soil (although it prefers clay soils).[14] As a leguminous and hardy plant, it is considered to be a beneficial component of natural or organic pasture management and lawn care due to its ability to fix nitrogen and out-compete weeds. Natural nitrogen fixing reduces leaching from the soil and by maintaining soil health can reduce the incidence of some lawn diseases that are enhanced by the availability of synthetic fertilizer.[30] For these reasons, it is often used as a green manure and cover crop.

Besides making an excellent forage crop for livestock, clovers are a valuable survival food: they are high in proteins, widespread, and abundant. The fresh plants have been used for centuries as additives to salads and other meals consisting of leafy vegetables. They are not easy for humans to digest raw, however, but this is easily fixed by boiling the harvested plants for 5–10 minutes.

As an invasive weed

Before the introduction of broad-leaf herbicides, white clover was more often added to lawn seed mixes than it is today, as it is able to grow and provide green cover in poorer soils where turfgrasses do not perform well. Many people consider clover a weed when growing in lawns, in part because the flowers are attractive to bees and thus could create a danger for people with bare feet.

White clover is the only known plant on which the caterpillars of the Coleophoridae case-bearer moth Coleophora mayrella feed.

In Britain, a high abundance of white clover is generally associated with species-poor, agriculturally improved grassland habitats, as it out-competes the more rare plants and grasses especially in fertile soils, and has often been added as part of reseeding. Agri-environment schemes, such as the Countryside Stewardship Scheme, Environmentally Sensitive Areas Scheme, and Environmental Stewardship, give funding to species-rich grasslands that are relatively infertile and do not generally have an abundance of white clover. However, white clover does have value as a pollen and nectar source particularly in intensively farmed areas or amenity grasslands where there are few other flowers, and it can be found naturally at low levels in species-rich grasslands. 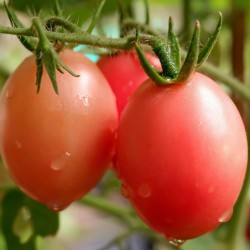 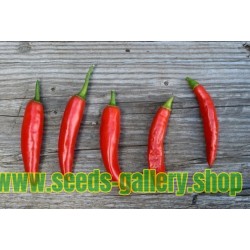 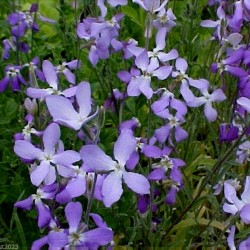 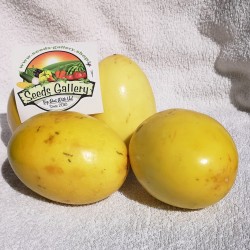 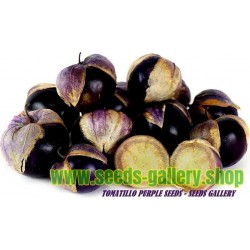 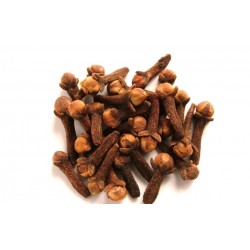 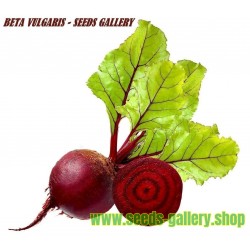