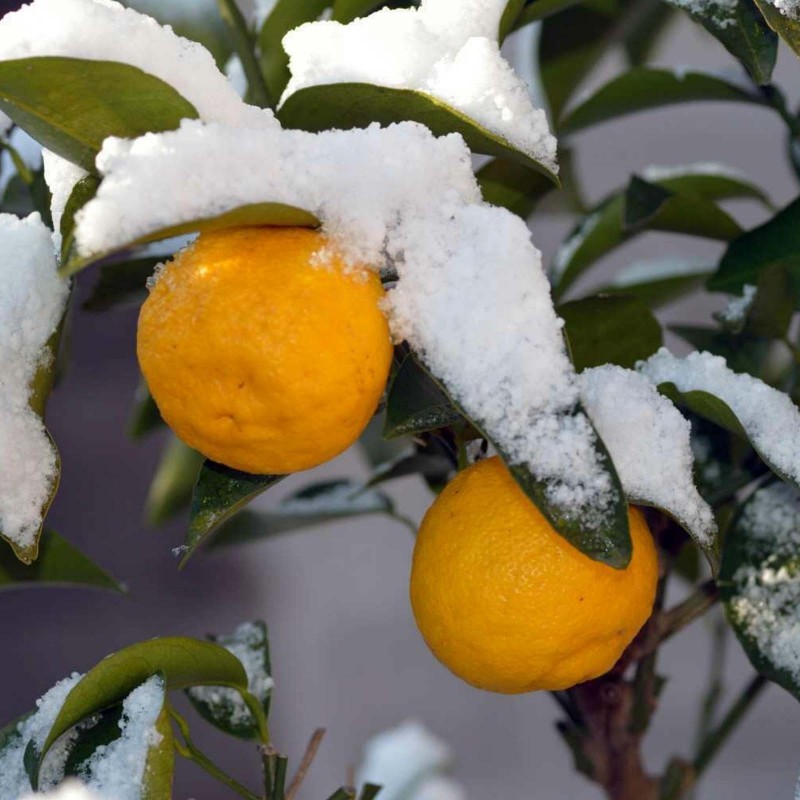 Price for Package of 2 or 4 seeds.

The fruit looks somewhat like a small grapefruit with an uneven skin, and can be either yellow or green depending on the degree of ripeness. It is hardy to -20C. Yuzu fruits, which are very aromatic, typically range

Price for Package of 2 or 4 seeds.

The fruit looks somewhat like a small grapefruit with an uneven skin, and can be either yellow or green depending on the degree of ripeness. It is hardy to -20C.

Yuzu limes are small to medium in size, averaging 5-10 centimeters in diameter, and are round, oblate, to slightly lopsided in shape. The peel is thick, pebbly, rough, pocked with many prominent oil glands and pores, and matures from dark green to golden yellow. Underneath the peel, the yellow flesh is minimal, divided into 9-10 segments by white membranes, contains some juice, and is filled with many large, inedible cream-colored seeds. Yuzu limes are highly aromatic, and the rind is rich in essential oils that are released when the fruit’s surface is scratched or cut. The juice and zest also have a unique, acidic blend of sour, tart, and spicy flavors with notes of lime, grapefruit, mandarin.

Yuzu limes are available in the winter through the early spring.

Yuzu limes, botanically classified as Citrus junos, are slow-growing citrus that are found on an evergreen tree or shrub that can reach over five meters in height and belongs to the Rutaceae family. Believed to be a hybrid between the satsuma mandarin and the ichang papeda, Yuzu limes are not botanically a lime but have earned the title since they are often prepared and used similarly. Yuzu limes are mainly cultivated in China, Japan, and Korea and are favored for their tart and spicy juice and zest. They are also valued for their strong fragrance and in Japan, it is one of the most popular scents to be used for cosmetics, candles, cleaning supplies, and bath products. While popular in Asia, Yuzu limes are still relatively unknown in the Western world, but they have been gaining awareness through famous chefs praising and using its unique flavor.

Yuzu limes are an excellent source of potassium and vitamin C. They also contain flavonoids, vitamin P which can help absorb other nutrients and increase circulation, and nomilin, which can help aid the body in relaxation.

Yuzu limes are best suited for both raw and cooked applications and are used for their juice and zest. When juiced, Yuzu limes can be mixed into sauces, vinegar, dressings, and marinades, or they can be shaken into cocktails, flavored water, and tea. Yuzu lime peels can also be used to flavor salted butter for seafood dishes, zested over salad or sashimi, used to flavor ponzu sauce, or ground into powdered form and sprinkled over dishes as a concentrated flavor. In addition to savory dishes, Yuzu lime juice and zest can be baked into tarts or pies, mixed into sorbets, or used in custard. Yuzu limes pair well with coriander, mint, eggs, sashimi, scallops, grilled fish, snow crab, poultry, steak, pork, pepper, black sesame seeds, cumin, lime, raspberry, pomegranate, and cherries. The fruits will keep two weeks when stored in the refrigerator.

In Japan, the Yuzu lime is one of the most popular fragrances and is most well-known for its use in the winter solstice bath. Each year during the winter solstice, public bathhouses will slice the fruit in half and float them in hot water, creating an aromatic experience. This bathing practice dates back to the 18th century and soaking in Yuzu water is believed to help prevent sicknesses such as flu and colds, and the essential oils and vitamin C are believed to help soften the skin and relieve pain. In addition to bathing, the Yuzu fragrance is also utilized in Yuzu tama or Yuzu egg production. On the island of Shikoku, Japan, farmers feed their hens a mixture of Yuzu peel, sesame seeds, corn, and kale to naturally create an egg that has the flavor and scent of the Yuzu lime. These eggs are sold at a premium price and are traditionally used for tamago kake gohan, which is cooked rice with a raw egg mixed in.

The origins of Yuzu limes are somewhat disputed among scientists, but the majority of scientists conclude that the fruit’s origins are within the upper regions of the Yangtze River in China and have been growing since ancient times. Yuzu limes were then introduced to Japan in 710 CE where they became increasingly popular for their light scent. In 1914, Frank Meyer, the man who discovered the Meyer lemon, visited China and brought seeds from the Yuzu fruit back to the United States. Included in his description of the fruit, he noted that he sourced the seeds from the Hubei Provence along the upper slopes of the Yangtze River at an astonishing elevation of 4,000 feet. The temperatures dip below freezing in that area, and there are no other citrus varieties that grow near the region. Today Yuzu limes are predominately available at local markets in Asia, but there are also a few farms in the United States that commercially cultivate the fruit and sell at farmers markets and specialty grocers