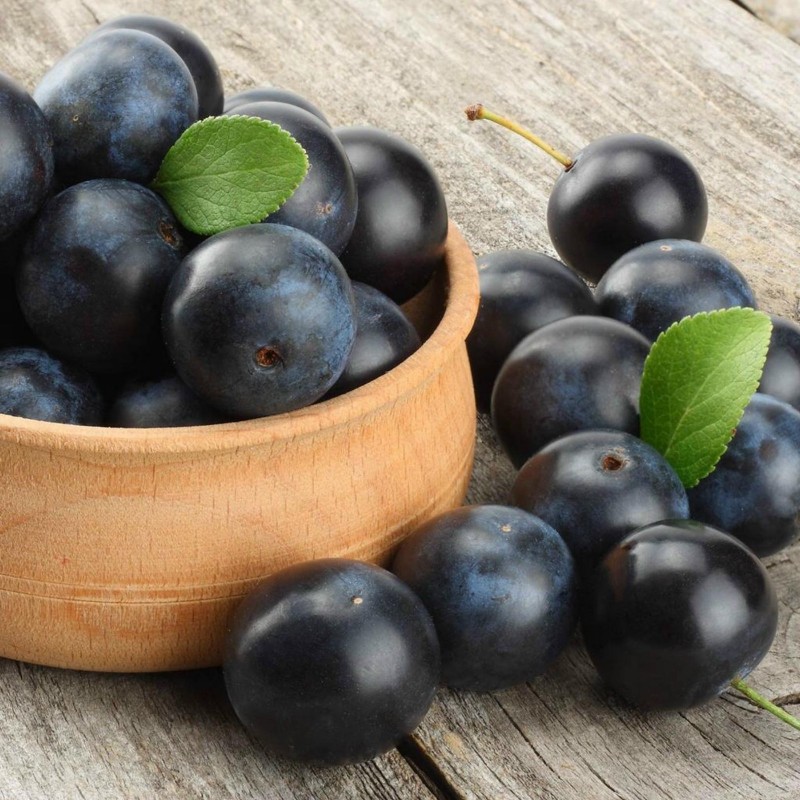 Prunus spinosa (blackthorn, or sloe) is a species of Prunus native to Europe, western Asia, and locally in northwest Africa. It is also locally naturalized in New Zealand and

Prunus spinosa (blackthorn, or sloe) is a species of Prunus native to Europe, western Asia, and locally in northwest Africa. It is also locally naturalised in New Zealand and eastern North America.

Prunus spinosa is a large deciduous shrub or small tree growing to 5 metres (16 ft) tall, with blackish bark and dense, stiff, spiny branches. The leaves are oval, 2–4.5 centimetres (0.79–1.77 in) long and 1.2–2 centimetres (0.47–0.79 in) broad, with a serrated margin. The flowers are 1.5 centimetres (0.59 in) diameter, with five creamy-white petals; they are produced shortly before the leaves in early spring, and are hermaphroditic and insect-pollinated. The fruit, called a "sloe", is a drupe 10–12 millimetres (0.39–0.47 in) in diameter, black with a purple-blue waxy bloom, ripening in autumn, and harvested—traditionally, at least in the UK, in October or November after the first frosts. Sloes are thin-fleshed, with a very strongly astringent flavour when fresh.

Prunus spinosa is frequently confused with the related P. cerasifera (cherry plum), particularly in early spring when the latter starts flowering somewhat earlier than P. spinosa. They can be distinguished by flower colour, creamy white in P. spinosa, pure white in P. cerasifera. They can also be distinguished in winter by the more shrubby habit with stiffer, wider-angled branches of P. spinosa; in summer by the relatively narrower leaves of P. spinosa, more than twice as long as broad  and in autumn by the colour of the fruit skin—purplish-black in P. spinosa and yellow or red in P. cerasifera.

The specific name spinosa is a Latin term indicating the pointed and thornlike spur shoots characteristic of this species.

The common name "blackthorn" is due to the thorny nature of the shrub, and its very dark bark.

The expression "sloe-eyed" for a person with dark eyes comes from the fruit, and is first attested in A. J. Wilson's 1867 novel Vashti.

The pocket plum gall is found on the fruit, where it results in an elongated and flattened gall, devoid of a stone.

The shrub, with its savage thorns, is traditionally used in Northern Europe and Britain in making a hedge against cattle or a "cattle-proof" hedge.

The fruit is similar to a small damson or plum, suitable for preserves, but rather tart and astringent for eating, unless it is picked after the first few days of autumn frost. This effect can be reproduced by freezing harvested sloes.

The juice is used in the manufacture of spurious port wine, and used as an adulterant to impart roughness to genuine port. In rural Britain, so-called sloe gin is made from the fruit, though this is not a true gin, but an infusion of gin with the fruit and sugar to produce a liqueur. In Navarre, Spain, a popular liqueur called pacharan is made with sloes. In France a similar liqueur called épine or épinette or troussepinette is made from the young shoots in spring. In Italy, the infusion of spirit with the fruits and sugar produces a liqueur called bargnolino (or sometimes prunella) - as well as in France where it is called "prunelle". Wine made from fermented sloes is made in Britain, and in Germany and other central European countries. Sloes can also be made into jam and, used in fruit pies, and if preserved in vinegar are similar in taste to Japanese umeboshi. The juice of the berries dyes linen a reddish color that washes out to a durable pale blue.

Blackthorn makes an excellent fire wood that burns slowly with a good heat and little smoke. The wood takes a fine polish and is used for tool handles and canes. Straight blackthorn stems have traditionally been made into walking sticks or clubs (known in Ireland as a shillelagh). In the British Army, blackthorn sticks are carried by commissioned officers of the Royal Irish Regiment; the tradition also occurs in Irish regiments in some Commonwealth countries.

The leaves resemble tea leaves, and were used as an adulterant of tea. Shlomo Yitzhaki, a Talmudist and Tanakh commentator of the High Middle Ages, writes that the sap (or gum) of P. spinosa (or what he refers to as the prunellier) was used as an ingredient in the making of some inks used for manuscripts.

The fruit stones have been found in Swiss lake dwellings.

Evidence of the early use of sloes by man is found in the famous case of a 3,300-year-old human mummy discovered in 1991 in the Ötztal Alps along the Austrian-Italian border (nick-named Ötzi): among the stomach contents were sloes.

A "sloe-thorn worm" used as fishing bait is mentioned in the 15th-century work, The Treatyse of Fishing with an Angle, by Juliana Berners.